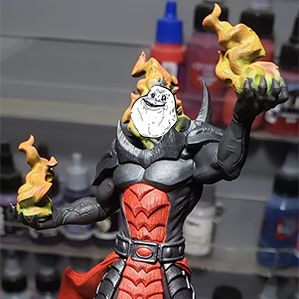 Hello everyone, and welcome to my first article for ATB. My name is Robert, but I go by Rhylin in most online settings, and I’d like to take a moment to talk about my time in MCP, as well as give you a recap of sorts from my perspective of the 4 Round tournament we held a few weeks ago in Memphis, TN.

Recently, I ran a small “slow grow” league for our local community here at War Room Hobbies, and at the end, we had planned to hold a small tournament where everyone could use what they’d learned through the league and just make a day of throwing dice at each other to wrap everything up. Midway through the league, one of the players came back from NashCon and had the idea to ramp up the tournament to try and pull in players from other areas, and potentially grow the MCP presence here in Memphis.

A little background on me, I’m super new to the hobby of tabletop miniatures. I come from a video game background, always wanting to play D&D, but never having a group until I found a website that would allow me to play online. I got into D&D with 5th edition in 2014, and have pretty consistently played for 7 years now. My wife has a friend who’s boyfriend managed to convince me to give wargaming a try in early 2019, and I bought in heavily to Age of Sigmar’s Fyreslayers. I played two games, and quickly realized that large scale games are not for me. I picked up Frostgrave and played several games of it over the course of the year until March of 2020, exactly two days before the nation went into lockdown, when I walked into my FLGS and saw the Marvel: Crisis Protocol core set. My wife, the amazing woman that she is, allowed me to purchase it, and I’ve been hooked ever since.

Fast forward to today, and I’ve been slowly trying to build the MCP community in our area, running countless demos, talking about the game in our FLGS discord and online, and finally getting a slow grow league going, so when Sean (the aforementioned player above) asked to take over the Tournament prep to try and bring more people in, I happily agreed and offered whatever assistance I could provide.

Word spread of the Memphis tournament, and on the day of we had 19 players signed up from 4 different states, and excitedly more local players signed up than we had for our normal game night turn out. Before the event even started, it was already considered a success. The doors opened at 10:00am, and players began to roll in. This was the first tournament I’ve ever participated in, and my plan was to get there early and go over my cards so I could be prepared and not slow down the game, but pre-tournament nerves got the better of me, and I spent the time listening to podcasts and trying to relax.

I’d like to take a moment to preface the rest of this article by saying this was my first time playing several of these characters such as Dormammu, Moon Knight, Medusa, Black Cat, and Punisher, and only the second time I was including other more popular characters like Ghost-Spider and Spider-Man (Miles Morales), but after playing almost exclusively Spider Foes rosters for 12 weeks during the league, I needed a change.

Round 1
As luck would have it, my first game ever in a tournament was with Merzain. Awesome, right? I won priority and selected Secures. We ended up playing Demons and Hammers at 19 Threat.

Merzain’s squad was Blade, Enchantress, Doctor Strange, Iron Fist, and Black Cat. (Forgive me for not remembering my opponents tactics cards throughout, it was a long day for me.)

Round 1/Turn 1 I made a mistake by rushing Gwen to the center line to pick up a hammer, as she was quickly dazed, but not much else happened during that first round. Round 2 saw a bit more excitement as we battled it out a bit more over the center line, but my true “I really like playing Dormammu” moment came in Round 3.  I activated Big D, teleported to within 1 of a size 4 to play Smash. A 10 dice Shadow Bolt into Blade dazed him, and with the Sap, I had enough power to 12 dice Incantation of Obliteration into Doctor Strange, dazing him, and triggering Dark Miasma and a second Incantation into Iron First, also dazing him. Living the dream.  During the Power Phase of Round 4, I used Blood Red and Personal, but sadly his first was Iron First, and using The Iron First on Big D, activated him, and the rest of the game was fairly one sided for Merzain, but you live and you learn.

Round 2
I guess I was just super lucky, as my 2nd ever tournament game was against Kenny. Awesome, right?  Once again, I won priority, and selected Secures. We ended up playing Demons and Cubes at 19 Threat.

I wanted to try something a bit different in this game, so I kept Gwen back, activating her first to grab my right cube, and then get back to the middle. I had Black Cat set up on the opposite side, and when he didn’t take his cube on that side, I took a chance and ran her up the board to snag it. He activated Cassandra and one shot Black Cat. #feelsbad. Neither of us expected it, and he didn’t want to leave Cassandra exposed so the cube laid on the ground and she moved back. My big mistake came during round 2, when I didn’t think about Black Cat’s ability to steal an extract, so I moved to attack, and then bounced her back to safety. I think my game would have been a bit better had I spent the time that morning reviewing my cards, and thank you to Kenny for pointing it out after the game. You have to a) read your cards, and b) learn from your mistakes so you can grow into a better player. Dormammu didn’t see the success in this game that he did in the first, but I did manage to daze a character with each of his activations. Kenny was an excellent opponent to play against, and I hope to get the chance to play him again when I’ve got a list I’m more practiced with.

Round 3
My 3rd round was a bye. After getting thoroughly trounced in the first 2 rounds, I was able to move around the shop a bit to watch what was going on, and even assist the TO with the demo he was running for a friend that was interested in the game. (Yes, the TO was working super hard during the event, and every second he wasn’t answering a question, or making a ruling, he spent teaching the game. Sean, or Sandbox in the Discords is an amazing person, and I can’t thank him enough for taking over running the event.) I did take some time to hang out on a stool, as I’m getting old, and by this time, my knees, calves, and feet were reminding me of this.  Here are a few pictures I was able to snap during my bye round.

Round 4
While playing people that I don’t normally get to play was fun, I think getting to play one of our locals in the final round of the tournament was pretty fitting. Jeremy and I have been playing against each other for over a year, and it’s always a tossup as to who is going to win.  Our last match, a casual game, was me playing my League Spider Foes roster against him playing an X-men roster he threw together, and it didn’t go well for Xavier’s kids.

For my final game, he won priority and selected Secures. Our crisis was Alien Ship and S.W.O.R.D. Base at 20 Threat.

Round 1, Jeremy activated Red Skull, powered up, moved Baron Zemo up, and then advanced forward himself. I, full of shenanigans, moved Ghost Spider up and managed to get the Alien Ship immediately. Guess who’s the target… I used my second power to take the secure, and then slide back. Lots of back and forth, and throughout this game it dawned on me that while taking characters that are easily damaged is good for Dormammu, as he gets powered up, when these characters get one shot, he gets lonely. Jeremy ran a great game and was able to get a Usurp off through a great strategy using Sin and Crossbones to focus down Dormammu, and everyone else on my lower threat characters.

Overall Experience
Once again, this was my first tournament ever; and while it was small, it was pretty massive for our local community. Through the consistent communication, advertisement, and the number of people at the shop that day, we actually had a new person buy core set, another person get a demo in and commit to showing up for our next game night, and even the store manager (who had several of the models, but never really played) decide to jump back in and start building and painting again so he can join in for the next event.

My takeaways for the event are most definitely:

No, but seriously, reading your cards and having an understanding of what each character can do, before you put the model on the table can go a long way in any game. Had I stuck with my plan and reread each of my cards before walking in the door Saturday morning maybe I would have used a completely different squad in each game. Making my mistake with Black Cat in my game with Kenny led me to remembering it in my game with Jeremy, and securing those VP at the end of the round.

Also, talk to your opponent after the game. Ask them what they think you could have done better. I found that no matter who my opponent was (Merzain at 4-0, or Jeremy at 2-2), they were always willing to talk about different strategies at the end of the game that could help me play my little plastic army men better.

Lastly, it’s ok to step out of your comfort zone. I’ve always enjoyed playing the “new hotness” when it came out, and I usually incorporate a new character into a list I’m playing or start a new list and include a lot of characters I’m comfortable with. For the tournament, however, I threw all of that out the window and went with an almost all new roster. I was smart enough to reach out to the community at large and get recommendations on what to include and what to get rid of; and I feel like without that knowledge I probably would have done a lot worse. I did go 0-3 in the tournament, but I’m taking away a lot of information that I definitely wouldn’t have gotten otherwise.

As the title of the article claims, I will likely always be a forever casual. I personally value good fun and silly tactics instead of agonizing over trying to get the perfect deployment and poor dice rolls, but a good spirited tournament, and prep now and again will probably be fun. I’m not sure how many of these articles I may attempt to write in the future, but if you’d like to read more, you can always find me in one of the discords.

Until next time friends, remember…