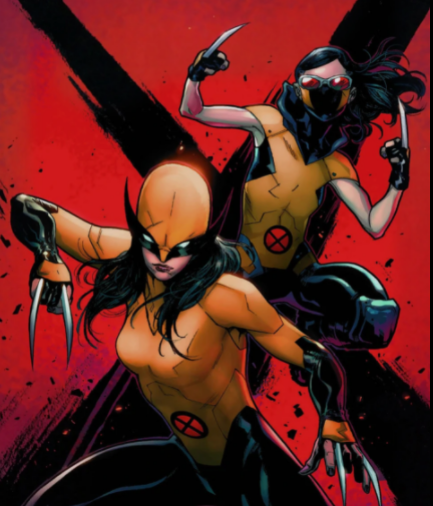 Another Monday, another First Impressions – this time X-23 and Honey Badger!

Technically they leaked yesterday morning but I’m not going to lie, I’ve been in full “ignore MCP content creation its the holidays” mode and it was hard to shift gears. But when Poland gives us leaks it’s time to make Lemonade (leakonade?)!

For those not familiar with the characters, X-23 and Honey Badger. Clones of Wolverine / each other they continue the grand tradition of people with knives for hands in the Marvel universe. Will they end up like MCP Wolverine or do they have potential of their own? Let’s dig in, starting with the older sister – Laura Kinney AKA X-23.

The easiest comparison to make for X-23 is that she reads a lot like a more selfish / less mobile Baron Zemo (with worse mystic defense!). She has his rerolls, but only for herself, her builder is his but with the upgrade of pierce tacked on, and Claw Rush is just Steel Rush but with pierce instead of bleed (another upgrade). From there things start to diverge as instead of Charge, Counter-Strike and Master Swordsman you get a strange package of alternative effects. Frenzy aka Angelic Assassin for when you pop off and want to spill over into another target, healing factor to dissuade opponents from trying chip damage on you, and Adamantium Skeleton limiting the efficacy of displacement effects. And then there’s Big Sis.

I’m not entirely sure whether this is good or not because specific character interactions are not normally like this (Husband/Wife on corvus/proxima or the worse version with sin/crossbones, special bodyguard for Rocket with Groot), but free medium advances (aggressive only) is intriguing. We’ll get into this more with Honey Badger but due to Gabrielle’s inability to interact with the scenario it seems unlikely you can justify running her up early to bait a free move for X-23. If it were infinite range it would be interesting for cross flank rotation threats but keeping them in r3 of each other will be a bit more limiting.

If X-23 is a remix of Baron Zemo, Honey Badger tracks with Nebula (though the comparisons fall apart a lot quicker here). Ironically unlike her clone/sister, Honey Badger actually HAS Baron Zemo’s exact builder, and her spender is an interesting twist on Lizard’s – giving up 2 attack dice for a wild elusive trigger, which seems fair considering she’s a 2 threat but she’d probably rather spend that power on her superpower in most situations. Much like Nebula she cannot interact contest or hold anything, but instead of getting reroll any vs scenario relevant targets, she drops the defense of anyone in range 1 by 1 AKA Bitter Rivals on a (short) stick alongside a taunt effect. Which, in turn, synergizes with her Lil’ Sis ability that mirrors X-23’s Big Sis. She may not be particularly tanky but the promise of running up X-23 into a team w/ no mystic hitters and grabbing an extract, threatening to bring up Honey Badger to degrade the attackers defenses and force out some hits onto the scenario irrelevant 2 threat.

I will admit with 3/2/2 and 5 stamina she’s flimsy by the standards of a 3 threat but in the new age of better balanced 2 threats I think she fits in fine as long as you accept she will die horribly at random intervals. But enough about the characters let’s dive into their tactics!

An amusing take on Till the End of the Line, I am… less sold on this card. Sure it prevents pushes and throws, but the OG prevented ANY kind of movement aka places and advances (AKA anti-thanos tech) while this one does not. Also both Bucky and either Cap are more than fine fighting at range while these two are almost exclusively r2 fighters. So this would only make sense when you’re playing a scrum in the middle like Gamma or Demons AND your opponent has brought no characters that can advance or place you. If you meet those conditions you’ll have a blast being an obnoxious pair of porcupines in the middle of the board, but this wouldn’t make a tournament roster where you have to run the gauntlet for example.

And finally an absolutely FASCINATING card. Essentially the secure half of Mystique’s leadership, and recyclable, I see a number of interesting tricks with this card. Before we proceed, DO NOTE this does NOT work on flip secures as it just creates a token that counts as an injured character for contesting. BUT, as it comes from a token, you can put it max r1 back on a point so that your opponent can’t clear it without going 2 inches further than they’d otherwise have to go to contest the point. If you’re feeling like gambling, you can also hold the tactic till late in the round and strategically place it after your opponents characters have gone (though good luck keeping Honey Badger alive!). I also do wonder if this has fringe play in Convocation – recycling Cagliostro a couple times on the back of this / Shuma-Gorath sounds like a really funny time. But for the most part I expect this to see some play on B/D non-flip secures specifically when you’re playing Honey Badger and don’t want to be stretched thin and that’s about it.

Overall I’m reasonably whelmed by the sisters. They have cool and unique tools and strengths, but some clear weaknesses. Wolverines will probably not see play competitively but Jonathan might. Honey Badger’s def debuff and taunt are hard to evaluate at first blush but I feel that the utility of those two powers will be the main referendum over whether you see these two on the board. And of course Honey Badger being the 2 threat will be the more common of the 2 if at all.

If the Kinney sisters seem up your alley look at wide attrition teams like Sam Avengers to bring them to life – lines where after everyone on the enemy team has activated, Honey Badger runs in to degrade defense for the enemy and then on the next round taunts twice and dies, giving you a Big Sis and Sam Leadership trigger for infinite value. Guardians seem like a fun place as well to go ultra wide and brute force the pierce on X-23’s attacks with rr2rr1. But again only table time will tell whether these two are up to snuff, personally I’m excited to give them a serious go in the dojo!