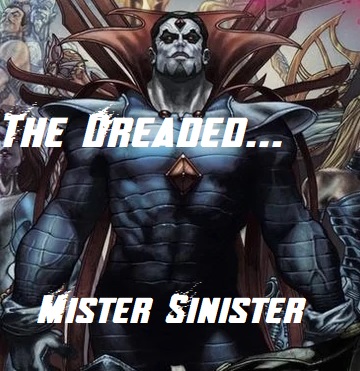 Whether it is The Dread Dormammu or The Dreaded Stark, there’s no character in the Marvel Crisis Protocol Universe which fails to send a shiver down the spine of their enemies… at least some of the time. Today let’s look at The Dreaded… Mister Sinister!

Welcome to the first in a series of articles I am putting together to draw attention to some of the characters and their unique interplay within Marvel Crisis Protocol. With over 100 characters either in the game or revealed and spoiled, all of which can play under the 24 (!!) leaderships currently available, there’s a truly vast number of different combinations which can provide huge variety in the play experiences on the table.

In this series I want to try and draw attention to some characters or playstyles which I think tend to fall a little under the radar. Let’s begin with the one who inspired this whole series for me. Mister Sinister.

With an incredibly cool model and a unique set of abilities, Mister Sinister has a lot going on in that card of his, but he’s still seen relatively rarely on the tabletop. Let’s break down what obstacles there are for him.

The first and most obvious is his defences. 3/3/4 with 6 health on his front and 5 on his back isn’t a terrible statline by any metric, but it also isn’t a fantastic one. His power generation is also middling; relying heavily on a 5 die energy strike to get himself power. When he has that power, though, he has a huge number of ways to spend it. Genetic Splicing is where a lot of it will go; a 5 die mystic beam that gets him the unique Genetic Samples he needs to fuel the abilities that are probably the reason you are taking the character competitively.

The samples can be used to negate damage on a 1 to 1 basis, and the ability to do that up to 3 times is unique to Sinister. Once he has those tokens on him, his survivability rockets up significantly – giving him an effective 9 health if he has all three tokens. But he can also spend those tokens to remove status conditions, or if he spends a power and a token, he can give Root to an enemy character within 3.

Those Genetic Sample tokens are very important then and make up a large part of the appeal to Sinister. Root is a very rare status condition which forces an opponent to spend 1 to use any reactive or active superpowers – this can be particularly devastating to characters like Thanos and Corvus who want to use their powers as much as possible, but most characters have at least one power they want to use and having that cost increase by 1 can ruin some critical plans.

Sinister’s ability to negate damage also doubles down on this playstyle. Whilst it can be used to keep Sinister alive at a critical moment, if he has the tokens to spend when someone attacks him with their builder it can slow them down significantly to receive less – or no – power because Sinister prevented the damage from occurring. Slowing the rate at which characters build their power can often be more important than the health you are saving – to the extent that I’ve sometimes found it worthwhile to accept damage from a spender with the intent of blocking damage from a builder later in the round.

Finally, Sinister has “Such Fun Little Playthings…” a fantastic (and very familiar) power which lets him advance a character within 3 short for 2 power.

Mister Sinister is currently affiliated with the Cabal, and only the Cabal. On the face of it, Red Skull helps with his power generation issues – but that’s only a small part of the puzzle with Sinister. The far larger issue with him is usually getting those tokens on to begin with. Whilst you can easily get one or two tokens with a Genetic Splicing, a canny opponent will make it difficult for you to get all three – and the more and earlier you can get those tokens, the better. Sinister with no tokens can go down very quickly.

Sinister does come with a tactics card which helps this dilemma. Forced Extraction lets him pay 1 power to cause 1 damage to up to 3 allied characters within 3 of him, gaining 1 token for each character damaged. That’s a hefty cost though; unless you are damaging Sin, your characters are losing a health to give Sinister a token and they aren’t even getting a power back. Team-wide, if you are using the tokens to prevent damage you have just broken even on health, at the cost of a power and a tactics slot

There are some characters who change that calculation. Played round 1, anyone with Healing Factor is likely to activate and heal the damage before they care that it happened, and that’s great! However, I’d like to draw attention to a particular affiliation where I’ve found Sinister can really shine for multiple reasons.

Any given Asgardian will still have 1 power left to pick up an objective, which is all they need to do unless they are on a pay to flip secure, and Sinister turns out to have a lot of synergy with several Asgardians!

Enchantress works well with Sinister because they can both move an opposing character and then use their beam attack. Doing it with one character is good. Doing it with two can be devastating!

Sinister also enjoys great synergy with Loki. Between Loki’s ability to increase the cost of opponent’s superpowers by 1 and Mister Sinister’s ability to Root, superpowers which are staples of a character – like Thanos’ gems, Vision’s throw and form change, or Valkyrie’s charge – can suddenly become prohibitively expensive. Teams like the Web Warriors, who are often very reliant on their pushes and can have difficulty with native power generation, often really struggle with the pair of them in one place.

Although all three of these characters are available in Cabal, I don’t feel like Mister Sinister plays well into the high aggression strategy that Cabal excels at. His potential to damage with his beam, especially in combination with Enchantress, is good – but it isn’t superb. Loki and Enchantress also have good potential for damage, but they aren’t the very greatest pieces for that – and Cabal has access to pieces who are much better for that role.

In later rounds, Sinister can also make great use of Thor’s leadership ability to double down on his health pool (if he heals just once before he is dazed and he uses 3 tokens to negate damage, he had 10 effective health for the opponent to chew through, often this will be more in practice). Alternatively he can remove annoying status effects without needing to use those precious Genetic Sample tokens.

With Asgard a team of Thor, Loki, Enchantress and Sinister at 17 threat can be very difficult to take down, whilst also draining their opponent’s resources and drawing the game out long enough for their advantages to show. The longer the game goes on, the more Thor’s leadership and the increased power costs from Sinister and Loki begin to show.

The last thing to think about with Mister Sinister is how to force the opponent to attack him. Whilst there are some options which are universal – giving him an extract and putting him on a point can force the issue enough in some situations – some teams may be able to just ignore him. As a result I’ve found that it is almost always worth taking Sacrifice.

Especially when being run with Enchantress, Sacrifice puts the opponent in a frustrating position where they need to spend 2 power or allow Enchantress to defend with her mystic defence – and if they do so, Sinister can then spend a power alongside Enchantress and take the hit for her instead, potentially getting to use those wonderful Genetic Sample tokens to reduce any damage.

Enchantress is almost always a high priority target, so Sinister being available to jump in front of the attack can be a real clutch move.

This works even better when combined with Odin’s Blessing. Whilst Sinister can’t use it himself, if an Asgardian character begins an enemy activation with 4 power and you have those two tactics cards available, it becomes much more challenging for that key character to be dazed or KO’d. To do so the opponent needs to move Sinister and then get two good attacks through on the target; definitely not a guarantee!

Outside of Asgard I would also like to draw attention to the Convocation as an intriguing possible home for our friend Nathaniel. Whilst I haven’t played much Convocation myself, he gains a number of advantages there; not least of which is access to the 5 die energy strike in a team which often lacks energy attacks, and a mystic beam attack which can benefit from Plane of Pohldahk to allow full rerolls on each attack.

He also benefits from the ever-present Iron Bound Books, and with Sacrifice he can help defend his erstwhile allies from a significant physical hit in a non-Iron Bound turn or a large energy attack the opponent had been saving up. Lastly, whilst it isn’t quite as universal as under Thor’s leadership, Convocation do have access to both Wong and Doctor Strange who can each heal, so can mitigate the cost of Forced Extraction to some extent.

There are other aspects to the character which can be niche in some situations. His medium move and large base allows him to get within range 2 of a central extract if you are running Eyes on the Prize and can get an extra power onto him from somewhere (perhaps an Advanced R&D play or within the Inhumans?). He also has one of the best spender attacks in the game on paper – a 6 die mystic attack which can be up to area 3 if he has the genetic sample tokens, and which can do an extra damage to every enemy character in range if any of those attacks rolls a crit, wild and a hit… which is only undermined by the fact that in over 30 games with Mister Sinister I’ve never had the 6 power and 3 genetic sample tokens necessary to make it shine. Then again, I’ve never run him under Cyclops’ leadership either, and the X-Men have plenty of characters with Healing Factor…

Finally, there’s the famous tactics card Cloning Banks. This is super thematic and allows for the possibility of bringing another character from your roster into the game, at the cost of genetic sample tokens equal to twice their threat value. I think this card is best used to paint another big target on Sinister’s head and force your opponent to deal with him rather than expecting to get the character in much of the time – but the cost of genetic sample tokens is very high, because without those he is much easier to just take out of the game!

In conclusion, your opponent should dread Mister Sinister if…

But perhaps Mister Sinister should dread these situations…

I hope this has been an interesting look at a character who has often stayed lurking in the shadows; maybe this will inspire you to let him come out and show the world why he is The Dreaded… Mister Sinister!

Do you have a character you’d like to understand why your opponents should dread? Please feel free to send an email over to ADreadedGoose@gmail.com and perhaps I can help!