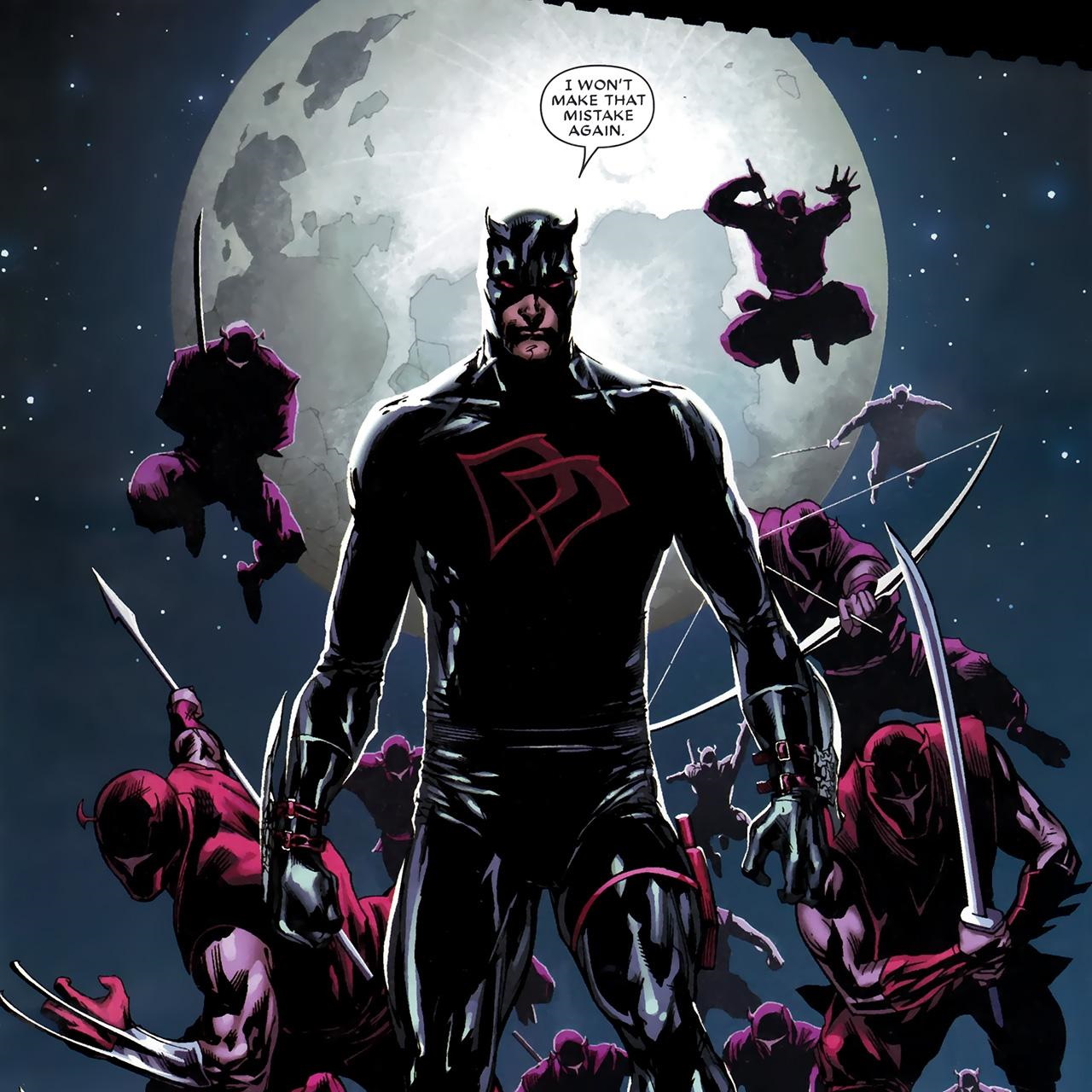 Another Monday, another First Impressions! This time: Shadowland Daredevil!

I openly admit I’m not a big comic reader so I don’t know exactly the storyline behind this Daredevil, but through osmosis I’ve gathered this run of the character is where he turns into an authoritarian crime lord in charge of the Hand to run Hells Kitchen the way he sees fit. Will he rule the table with an iron fist, or is he fated to end up like his original mcp iteration? Let’s dig in!

Starting with his stats he presents as a slower but far tankier version of his debut self. Trading in long move for a 4th physical defense and one more stamina on each side, this Murdock will stick around all game. Combined with his Radar Sense and Stealth (more on that later) he is one of the tankiest 4s available right now and I’m here for it!

Next we have his builder which is pretty boring with no frills… OTHER THAN IT SUMMONS FREAKING HAND NINJAS. We’ll cover them later on in the article but I love how thematic grunt summoning has been for both Fury and Daredevil despite being such different characters conceptually. It really shows theres a lot of cool design space here to explore!

An interesting inversion of his “normal” baton snare, instead of pulling enemies in its now a miniature Blades of Ichor from Angela, which helps him get into the fight without wasting action economy.

And finally we get this banger of a spender. 9 dice if you summoned some ninja with your builder, and it even gets you a hop away! Do note the spender goes through some… changes….

on its injured side. Better in a LOT of situations as long as you didn’t desperately need that vanish trigger. Despite being so attack focused, Matt IS a leader so lets dive into his leadership ability:

Move aside X-Force, Criminal Syndicate are here to brawl! An interesting inversion of Miles’ Web Warriors leadership, allies get a reroll against enemies holding or contesting objectives. Do note that the skull reroll clause ONLY works on the leadership reroll and not all rerolls like Web Warriors. This is a MASSIVE sea change for the Criminal Syndicate who have been locked into Kingpin’s “stick to fast scoring secures” gameplan since their inception.

After his leadership though comes not a lot of decision points on his card, merely passives to boost him up. Radar Sense and Stealth combine to make him the nighmare lovechild of Iron Fist and Mystique (but with extra stamina!). He also retains Wall Crawler to keep him nimble. Also watch out for his flipside where he gets his only superpower:

If anyone dazes him, he WILL wake up and choose violence. 9 dice a2 for 6 power is a lot but you sure as heck get a lot for what you’re paying for.

Now that we’ve covered Daredevil, lets put him in his proper context by talking about the Hand Ninjas he summons:

Similar to Fury’s S.H.I.E.L.D. agents, these grunts won’t count for much in a fight. That said, thanks to Ninja Ambush we can count them as a little bit of stretch damage on a Coordinated Strike. They can also KO themselves to do the extract half of Kingpin’s leadership. These grunts continue the precedent set by Fury of seemingly purely there to be an extension of the model itself. Considering these grunts work with both Elektra and Daredevil according to the bottom of the card, it will be interesting to see how she recontextualizes them.

Will Daredevil be splashed anywhere or is he condemned to be played as a leader only? At this stage I’m not sure but leaning towards leader/cs only. His tank stats are excellent, even by 4 threat standards, but the lack of controlling effects imply to me that he wants to be built around for an aggro team taking advantage of his leadership. He’ll fit into Kingpin CS in a pinch, but unless he has some exciting affiliation inclusions I doubt he’ll ever be second fiddle.