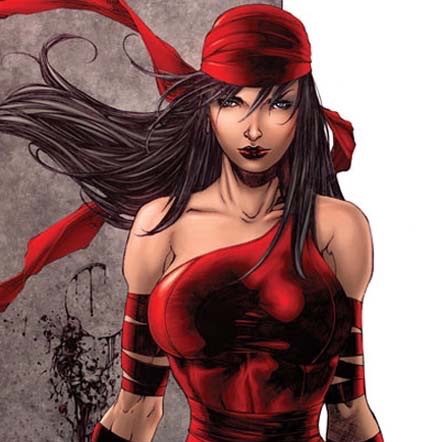 Another Monday, another First Impressions! This time, Elektra:

Elektra first hit my radar as a child in everyone’s favorite superhero movie, the original Daredevil and the less successful eponymous spin-off

Early 00s superhero masterpieces aside, Elektra is a master assassin known for her use of sai and a grab bag of minor telepathic abilities. She’s probably best known for her complicated relationship with Matt Murdock AKA Daredevil (which makes them perfect box mates). But enough of that lets dive into the card itself!

11 stamina across both sides and 3s all around with a medium move isn’t much to write home about. Elektra is quite squishy, make sure you put a lot of effort into her positioning to keep her alive as Stealth + Martial Prowess will only take you so far.

I had to do a double take here, because her builder is NOT a builder. Well, it DOES generate her power with Out For Blood (more on that later) but we might as well treat this as a flat builder. Wild Pierce and Bleed on a Mystic attack seems solid (especially at range 3!). X-23’s been doing a lot of work for me lately with her builder, and this is essentially trading the reroll for better (sometimes?) attack typing and longer range. Hell it even summons the Hand Ninjas for a 4 dice strike to follow up if you don’t have them out already. The low amount of power generation does concern me but lets look at the rest of the kit.

Wow. Second range 1 attack after Ant Man, designed to play with her superpower Assassin’s Step, it is essentially a 10 dice Synthezoid Avenger if you can line up your Ninja right. Admittedly it seems really hard to scrounge enough power to pull this off (7) but if you can live the dream she is going to hit like a TRUCK.

Turn any attack into a Flying Kick for 2 power! Ancient Throwing Blades -> Assassin’s Step -> Impale is clearly the pattern we’re supposed to follow but as mentioned above her power economy basically promises this is an once per game deal unless your opponent is foolish to fuel her / you dump power into her with something like A-Force/Brotherhood/Cabal. But even in the normal case where you aren’t aiming for a big splashy Impale this has great utility for getting her to stick onto points.

Another in a long line of characters with Stealth and powerful defensive tech at r2, leaving them perfectly vanilla at 3-6 inches range. At least as long as you roll well this only costs 1? First one is free if you’re lucky under Avengers leadership? Unless you’re going big on the Impale game plan you’ll probably have power up for this at most times so I do rate it higher than Martial Prowess on say, Gamora.

And FINALLY, the passives. I already have mentioned Out For Blood a few times in this article but lets dig in. Basically if she does damage to someone, no matter how she gets a power. Her builder is essentially a flat builder, her spender costs 4 in the end, even Martial Prowess looks cheaper – as long as you roll well. If you are a person who gets tilted by dice, Ms. Natchios might not be for you. If your attacks and powers don’t even connect you get LITERAL NOTHING.

Oh and she has stealth too, which is a nice bonus.

We’d also be remis if we didn’t show the Hand Ninjas card again as her “builder” summons them / her spender cares about them:

Overall I’m unsure how to feel about Elektra. She’s a collection of some really cool design concepts – power gen through passives rather than having a builder, first r1 attack, shares custody of Grunts with Daredevil. But at least from my first impressions angle her power economy looks worse than terrible, and she might literally be one of the worst 4 threats in the game if you can’t roll so save your life – no control, no power, hell you can’t even do your place effect without doing damage! Thankfully her “builder” is pretty solid as basic attacks go but I still think its a short of what I’d want to see without generating power innately. At the end of the day I think she’ll be a fine inclusion if you love the character or are playing her somewhere affiliated, but unless I am vastly misunderstanding the math involved with her kit I doubt she’ll be lighting the meta on fire any time soon.