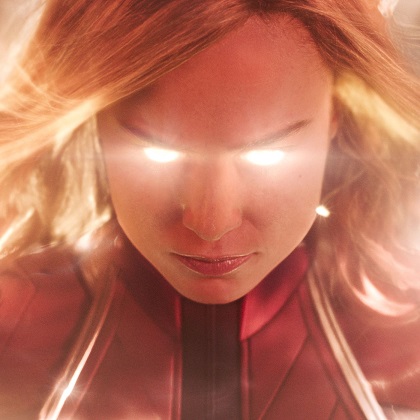 Whether it is The Dread Dormammu or The Dreaded Stark, there’s no character in the Marvel Crisis Protocol Universe which fails to send a shiver down the spine of their enemies… at least some of the time. Today let’s look at The Dreaded… Captain Marvel.

Captain Marvel is a character that most exemplifies the classic blaster archetype in Marvel Crisis Protocol. When only core set characters were available, her Binary Form gave her the attack with the highest amount of dice in her Rocket Punch, and whilst there are now a lot of scarier attacks out there, Captain Marvel remains one of – if not the – most consistent sources of ranged energy damage in the game, a role which is increasingly relevant as we see more characters where energy is their big weakness.

Carol benefitted from a little fine-tuning in the recent card updates, though the difference is relatively minor compared to some characters. Now immune to Incinerate as well as Poison, she also saw her Binary Form reduced from 5 power cost to 4.

Captain Marvel is affiliated in Avengers and A-Force, both places where she can enjoy assistance with her power. With Steve Rogers’ leadership, Carol only needs to fire off her energy blast in the first round to have Binary Form online from the second round, and in A-Force, depending on how often the rest of your characters are being attacked, she can have it online even earlier.

Although her Energy Blast looks underwhelming at first glance – being only 4 dice – the ability to reroll any number of dice is one of the best tools to help the consistency of her damage output, making the regular energy blast roughly equivalent with a six die attack and if she uses her Binary Form to bring it up to 6 dice the boosted version is around the same expected output as a nine die attack.

An obvious point of comparison here is Iron Man, though where Tony is able to bring potential for pushes, Captain Marvel is bringing output similar to his Ricochet Blast tactics card – but potentially many more times over the course of the game. Of course, Iron Man has his invulnerability and higher physical defence to help differentiate them further, but Carol does have a few other advantages – as you’d expect for a 4 threat character versus a 3 threat.

The other very rare resource Captain Marvel is bringing to the table is a size 4 character and terrain throw. This is increasingly relevant, as the number of ways to move size 4 characters has decreased following the recent update. Hulk, She-Hulk, Thor and Black Dwarf are the only other characters with a throw superpower that goes up to size 4 – and of those, all but Black Dwarf cost more threat. Whilst there are more characters who can do it with attacks, the ability to maintain two actions and throw can be very valuable if you need to, for instance, chase down a Juggernaut and throw him off a critical secure.

Finally, Carol’s Energy Absorption power also makes her fantastic when duelling other energy-focused characters. The ability to negate wild triggers if she rolls her own wilds, and gain the power she needs for her Binary Form and Danvers’ Special, can make her a very frustrating target for some specialised attackers – particularly when she can turn the Binary Form on early and get up to 6 energy defence.

Captain Marvel is an energy-hungry character; ideally she wants to spend 7 power in a turn to use both her Binary Form and Danvers’ Special, and often she will have to choose between doing one or the other unless she has been attacked and gained some power. However, as mentioned, A-Force can help power her up quicker, and she does have access to her Strike which gains power equal to damage dealt. Whilst it isn’t as reliable as her energy blast, there is the potential for her to roll 7 die after activating her Binary Form – the equivalent of Hulk’s basic strike on a character that costs 2 threat less, and quite likely to earn her the power she needs to use her throw or Rocket Punch.

There are a few other places where Captain Marvel has a good home. As with Ms. Marvel, she enjoys Miles Morales’ leadership – gaining the ability to reroll skulls makes her damage even more consistent, and the defensive reroll helps her significantly on turns when she can’t afford to use her Binary Form where she can otherwise feel a little vulnerable to physical attackers.

Captain Marvel also has access to another tactics card alongside War Machine – The Air Force. This card lets either character spend 3 power at the end of their activation to allow the other character to immediately activate.

I’ve found it relatively rare that Captain Marvel is the one who has the power to activate this card – but with his beam attack gaining power and the only thing he has to spend it on being his Empty the Clip attack, War Machine can often wind up with a lot of power and not want to spend it.

The fact that this card is not limited by range makes it extremely useful on a crisis where characters have spread out across the board and are fighting on two fronts, especially if you can maintain priority. Often, it feels like you are having to take a risk on one side of the table to activate on the other – but here, you can have War Machine start the round, attack his targets, and then let Captain Marvel have her impact on the other side of the table.

I find this works particularly well with Hulkbuster, where I am often taking characters who generate large amounts of power so that I can play both Helios Laser and Follow Me over the course of the game.

With only 3 physical defence, she can go down quickly when having large pieces of terrain thrown into her, as the Binary Form does not add to dodge dice. Hulkbuster helps to shore this defence up – and he is a second strong energy attacker who can displace those larger models and throw size 4 terrain.

Inhumans also have the potential to get Carol’s Binary Form or Danvers’ Special online round one and between Black Bolt, Ronan and Captain Marvel it can be very difficult for your opponent to keep pieces that are vulnerable to energy attacks out of range of at least one of them. Here, Captain Marvel can also team up with Ms. Marvel – and access to the Fan Club tactics card gives Ms. Marvel a few options that help her impact the game that much harder. Whilst I covered it in more detail in the look at Ms. Marvel, Fan Club allows for an out of activation throw or an unavoidable area push from Ms. Marvel when Carol does the things she wants to do as much as possible over the course of the game.

Magneto’s leadership also helps Captain Marvel significantly, both letting her get her superpowers online more quickly and benefiting from her ability to throw size 4 pieces of terrain. There, she can also add reliable energy damage to a team which is often lacking in that regard.

As well as particular teams which help her out, there are a few crises where Captain Marvel’s array of abilities help her shine that little bit brighter, though. On Deadly Meteors, her 4 energy defence is highly relevant, as is her ability to displace threats that would otherwise interfere with claiming the Meteor. Whilst it is true that your opponent will likely try to take characters with high energy defence on these crises, the only 2 characters that I have found will reliably stand up to Captain Marvel’s energy blasts are Captain Marvel herself, and Doctor Strange: Sorcerer Supreme, where the ability to negate attack dice on wilds can slow her down significantly. Even there, though, those characters are quite vulnerable to having terrain thrown at them, so if you can control the timing and make sure you are in range of relevant pieces, she can still win those duels.

On Terrigen Mists and Demons Downtown, Captain Marvel’s immunities help her to ignore the downside to the crisis. On Terrigen she still has to deal with the fact that the token will be moving each round, and she doesn’t tend to enjoy clustered fights where she can be hit before she gets her Binary Form online, but her throw can keep her highly relevant. A common play pattern with her is to activate her early on a round where she can get her Binary Form online and attack twice, then activate her late in the following round so that she enjoys the benefit of the defence for as long as possible and can ideally throw a large character off the point and into someone else.

On Demons Downtown, Carol is much happier to sit on one of the points and blast characters who have been incinerated by the crisis. As a general rule, the less often you are going to have to move her, the more heavily she is likely to impact the game. Though there are some exceptions, such as Research Station, where her ability to dislodge a character like Juggernaut or Hulk from the station can be move valuable than her damage output.

A common comparison for Captain Marvel is Vision – another 4 threat Avenger with a cheap throw and an energy attack. Vision is a fantastic character and has broad applicability in a lot of situations, but he is best at dealing with large groups of low threat characters where his ability to hit multiple targets with his beam adds up over time. He can struggle against larger, heavier targets. Captain Marvel is an excellent character for taking on one of those bigger characters and consistently putting high amounts of damage onto them.

It’s also worth noting that Captain Marvel’s Rocket Punch remains a relatively reliable source of Stagger, as you only need to roll the wild you don’t need to do damage for it to take effect. Limiting the actions of high impact characters like Iron Fist, MODOK and Corvus before throwing them away from targets they want to hit can significantly slow them down.

Carol may also play much easier into your crisis selection than Vision. Deadly Meteors and Demons Downtown are, in my opinion, two of her best crises. Vision is not great on secures which require him to roll defence dice to claim the point, and whilst he can still roll 4 defence dice whilst incinerated if he has the power to change form, the threat of being caught on 1 defence die can dictate how he needs to spend his power round to round.

None of which is to say that Vision is a bad character; far from it. But they are trying to do different things. Vision is a flexible character who builds a lot of power for tactics cards, can throw size 3 terrain and has a fantastic beam. Captain Marvel is a single-target damage dealer with a more threatening throw but whose specialism makes her a lot more threatening to particular characters and in particular crises.

In conclusion, your opponent should dread Captain Marvel if:

But perhaps Captain Marvel should dread if:

So that’s Captain Marvel! A premier energy attacker with some matchups where she can hit hard. She just needs to find the right moment to cut loose!

Do you have a character you’d like to understand why your opponents should dread? Please feel free to send an email over to ADreadedGoose@gmail.com and perhaps I can help!