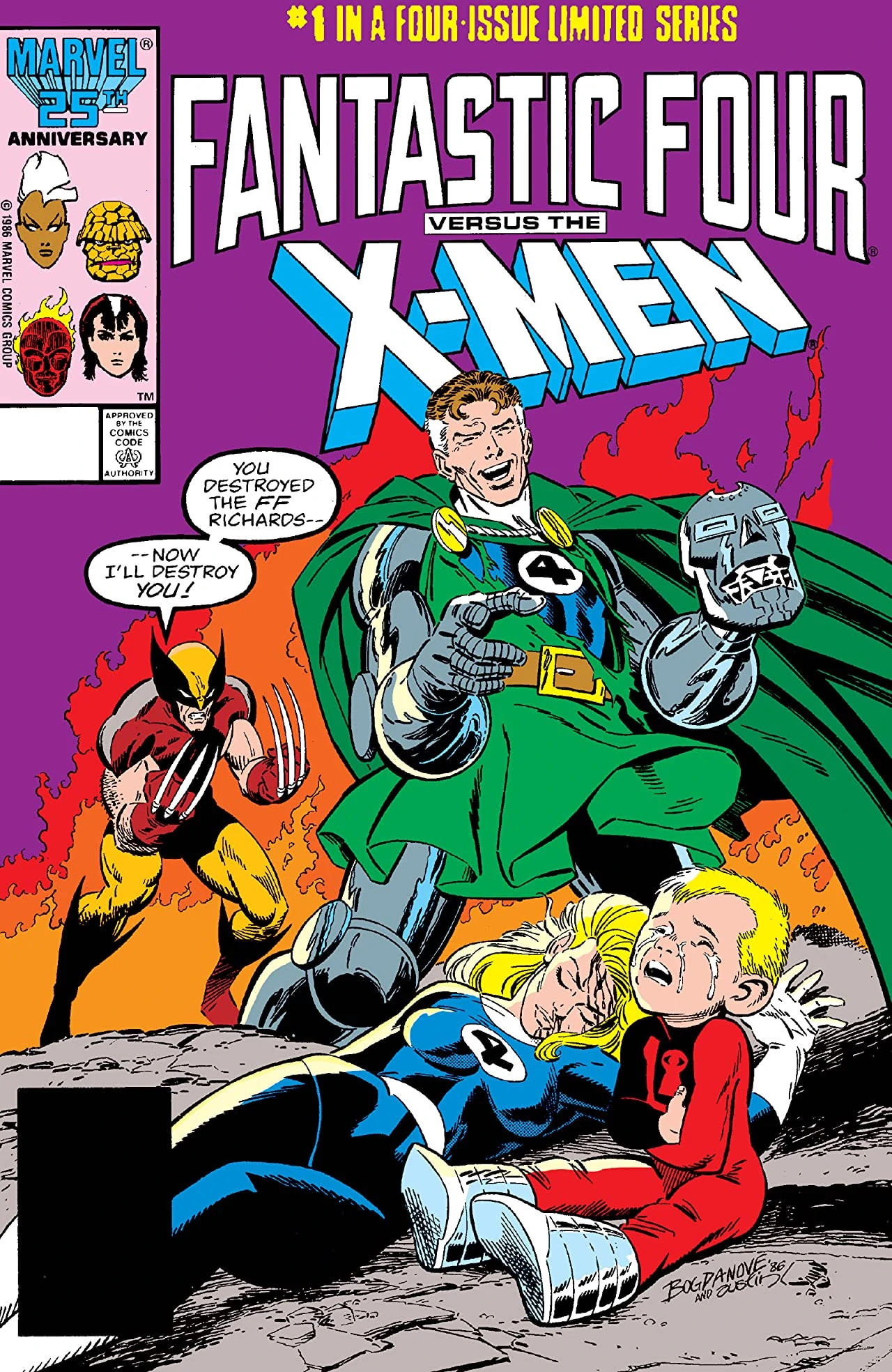 Asmodee has announced that their third Ministravaganza is going to be in June of this year! After some discussion, I realized this was a pretty good topic for another Rampant Speculation article. I’ll be taking you through what we know, and what I expect based on the patterns we’ve seen from them before. Obviously they could always deviate from their patterns, but if nothing else, it’s nice to review these sorts of things.

The event that I thought was the first Ministravaganza, in retrospect, turned out to not be called that at all. It was Gen Con 2020 Online, which was July 30 through August 2. That was when they revealed the first wave of X-Men and Brotherhood, which released 3 months later in November of 2020. They had the sticky note with the X, the 90’s-style trailer, the whole treatment. They had a few other reveals, like Doctor Strange’s card, as well as the first full look at some of the October releases, but the X-Men were definitely the main attraction.

The actual first Ministravaganza was called “Mini-stravaganza” in a lot of their marketing. It took place on March 18-20, 2021. It was timed to be the week before Adepticon, but presumably they chose the name “Mini-stravaganza” to separate it from any convention and just let it be it’s own thing. The takeover of Star Wars had just happened, so a lot of the convention focused on that, but we did get a trailer and some card reveals for the Amazing Spider-Man wave, which released in August 2021

Summer was pretty quiet in 2021; we did get a trailer for Convocation vs Dormammu on July 13, but there was no online convention with panels and all that in the summer like there was in 2020.

Then the second Ministravaganza (now with no hyphen) was September 9-11, 2021. It was timed to be the week before GenCon, which had been delayed until September. The big headline for this event was the reveal of the next big X-Men and Brotherhood wave, with the new sticky note, the new 90’s-style trailer, and all that. They released it on February of 2022.

This new Ministravaganza seems to be unique because it is no longer timed to line up with a big convention; we don’t know the exact dates yet, but we know it’s in June. Adepticon is in late March, and GenCon is in early August, so it seems like AMG had decided to just make Ministravaganza a standalone thing, rather than a “this is what we’re doing during this convention” kind of thing. That said, I think it’s pretty safe to say this is the only one that will happen in 2022; they seem to be timing it toward the middle of the year, so I think it will be more like GenCon Online 2020 was. We’ll likely get some kind of big preview for the release coming near the end of the year for the third anniversary of the game.

For the first 10 months that this game existed, the absence of mutants was very noticeable. It seemed like they were holding them all back, either for licensing reasons or something else. When the big reveal happened at GenCon Online, they made it clear that mutants were always planned to be part of the game, they were just waiting for the one-year anniversary to drop them.

So the following year, when we heard about another GenCon-timed event, many people (including myself) looked at other big announcements they could make along the same lines, and concluded it had to be the Fantastic Four. They are the first team to ever be published in a Marvel comic, way back in 1961. Their popularity has dwindled over the years, and most of us who grew up in the 90s know about them, but aren’t huge fans. But of all the well-known characters who first appeared in the 60s and aren’t in the game yet, most of them are either members of or enemies of the Fantastic Four. Instead, we got a new wave of X-Men. Does that mean that this year will finally be the Fantastic Four? Probably not, in my opinion.

There are a number of hints that the Fantastic Four are coming next year, not this year:

So I think we’re going to get one more wave of X-Men and Brotherhood at this event, timed for November.

Which X-Men characters will be revealed?

I think there are two obvious answers, then a bunch of other possibilities. We’ll likely get 4ish boxes again, and each box will have either a single large character or two smaller ones.

Jubilee. AMG obviously has a lot of love for the 90’s animated show; you can see it in the era of X-Men they’ve drawn from, as well as the style of their X-Men trailers being clearly inspired by 90’s commercials. If you watch that classic opening, you’ll notice that every member of the main cast is in MCP now except two: Jubilee and Professor X. I’ll get to the Professor later, but Jubilee is absolutely coming soon. I’m hoping for another threat-2 to help the X-Men make a really solid wide list.

Nightcrawler. The other source I always look to for core X-Men characters is Giant Size X-Men #1 in 1975, which set the stage for the Chris Claremont run, who is the best-known and longest-running X-Men writer to ever work on the title. It introduced a new team, with the first appearance of characters like Storm and Colossus. A few of the new members like Sunfire and Thunderbird weren’t around for long (either quitting or dying within an issue or two). Banshee stayed around a bit longer, leaving the team in 1979. But everyone else who joined in Giant Size X-Men #1 has been strongly tied to the team for the rest of comic history. And all of them except Nightcrawler are in MCP. This is why I think he’s almost guaranteed for this year.

Professor X. As mentioned earlier, I’m a little more dubious about Professor X. While he’s certainly a tentpole member of the team, arguably more than any other member, he does not often participate in field missions. I think it is entirely possible that his presence will be felt in Tactic cards only, since that lets him act as he usually does in the comics, movies, and shows; as a sideline support who doesn’t actually appear in the battle. But I could be totally wrong, and they could add him this year.

Psylocke. As I mentioned in another Rampant Speculation article ( https://acrossthebifrost.com/2022/01/04/rampant-speculation-team-tactic-card-art/ ) you can often look at Team Tactic card art to predict future characters. Psylocke was on To Me, My X-Men, and is certainly popular enough to make sense for this year.

Iceman. The original 5-person X-Men team still has 2 members missing, and one of them is Iceman. He wasn’t around much in the 90’s, which is why I suspect he’s been missing so far, but I’m sure he’ll be around eventually. Maybe it’ll be this year.

Archangel. The other member of the original team was going through some changes in the 90’s, and I think we’re more likely to see that 90’s version first, before we ever see the original Angel.

Blob, Pyro, and maybe Avalanche. The Brotherhood in the 90’s animated series had a few “lacky” characters that weren’t really developed, but were pretty consistent. I think this could be a good time to fill out that roster with at least one or two of these three.

Sentinel(s). Based on the leaked invoice from a while back, we know a box called “Sentinel Raid” is coming. We know almost nothing else about it, but that would be an exciting way to end the year. This year has seen the first appearance of unnamed characters in grunts, so it makes sense to introduce sentinels as another unnamed character. Additionally, many of the X-Men sculpts work sentinel pieces into their poses.

Apocalypse. Each year has had one “Cosmic Threat” character box, with a big character, some terrain, and an Ultimate Encounter. There appears to be one for each set. Set 1 had Thanos in 2020. Set 3 came early with Dormammu in 2021. Now it’s time for one in set 2 in 2022. There’s a chance the Sentinel Raid will take the place of it, but if we do get a more traditional cosmic threat box, Apocalypse seems like the only villain that fits. He was a big deal in the 90s, had a movie not too long ago, and is one of the few villains that often makes “Top 10 X-Men Villain” lists that isn’t part of the game yet. Releasing him alongside Archangel would make perfect sense, since he’s the reason for Angel’s transformation. Does that mean we’ll see him at Ministravaganza? Hard to say, which is why he’s so low on the list.

What about between now and then?

We’re in a bit of a lull right now; there are no new releases for March, the next wave is likely in April or even May, and we know nothing about what’s coming after that. Does that mean we have to wait all the way until June for new content? I doubt it. The longest AMG has ever taken off is two months; once in 2020 (Asmodee did no new releases in April and May) and twice in 2021 (March and April had no new releases, then again in September and October). I’m sure there will be at least one wave of releases that we haven’t even seen a hint of yet, and it will release before Ministravaganza 3. Maybe we’ll get some more SHIELD releases with Quake, Spider-Woman, and characters like that, or maybe we’ll get some other random fill-ins or other add-ons for existing affiliations. Time will tell!