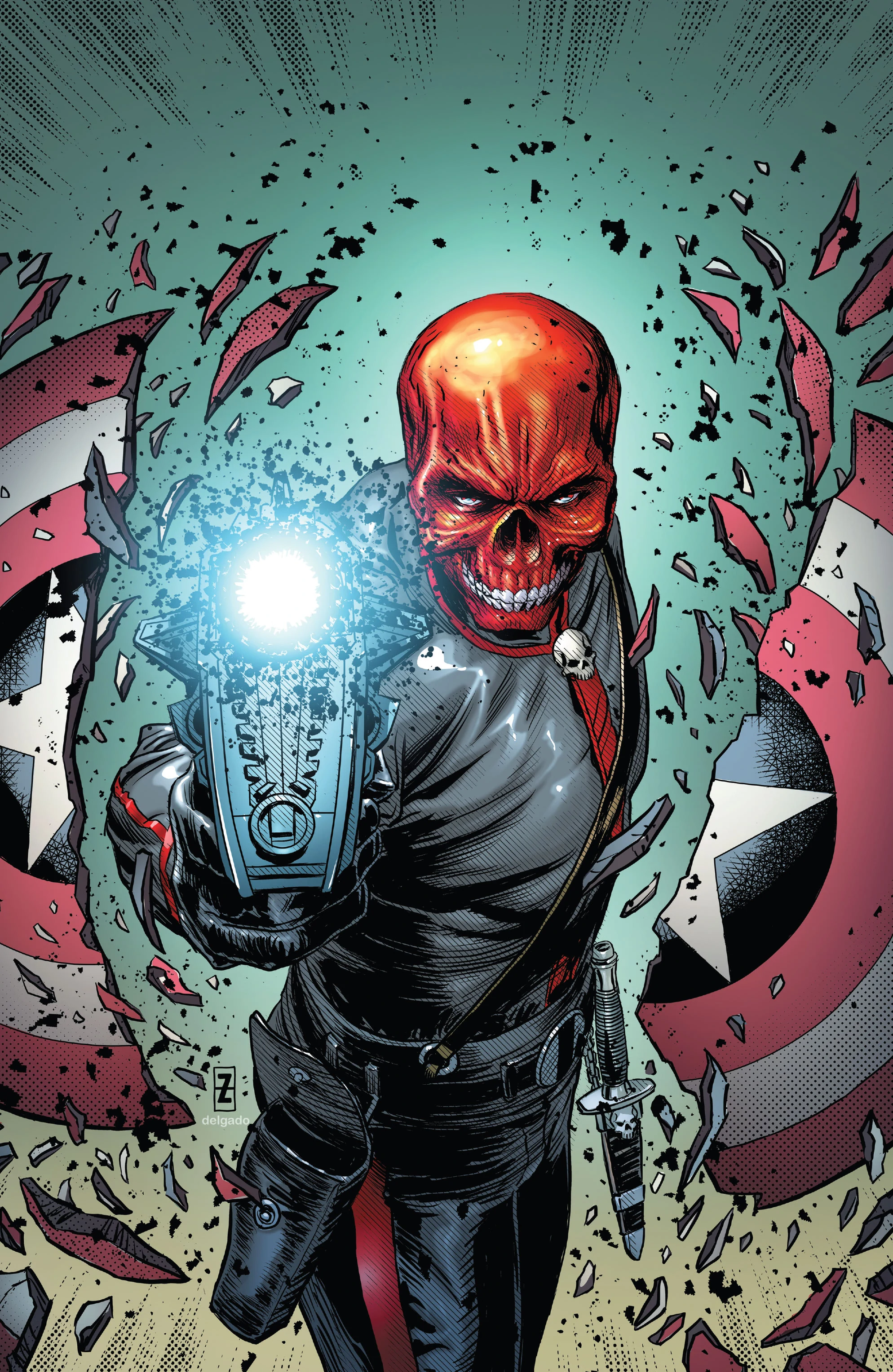 In my time as the host of the Morlocks podcast, and as the general Queen of Jank for this game, I have gathered a lot of interesting bit and pieces of ideas and info. I feel that I should start getting some of these things down on paper, which is why I am opening the Emporium. This is a place where I am going to put on paper fun, interesting and weird things that I just don’t hear the rest of the community talking about. Not everything shown here will be great, maybe not even good, but I think everything that I will bring up here will be things that players should keep in mind as they go forward with list building.

So, for our first time inside the Emporium, I wanted to talk about something that I have mentioned here or there for a while now, Out of Affiliation Red Skull. Now, I will say straight out of the gate, this is not going to be a case of me saying that this is a character that ever list needs to include. Absolutely not, he’s good, but not that good. What I am going to advocate for is that Red Skull is a perfect concoction of abilities that every list needs to consider him, as he is a very uniquely shaped cog that might be just what the machine you are building needs.

Any conversation about this model has to start with the Cosmic Cube, as it’s the core that makes Red Skull tic. Cosmic Cube ends up being a power generation option where the output of power well outweighs the risks involved. The diagram below, helpfully provided by the wonderful Jacob from Xavier-Protocols.com, shows how safe the cube is to use on your healthy side. You are only likely to take damage from your cube half the time that you activate it. Even when you do take damage, it’s very unlikely to be more than 2 damage. These two facts in combination mean that, without any outside sources, you are unlikely to daze yourself across a game. Considering that Red Skull as a character is someone who want to generally stay away from direct face to face conflict when possible, and has additional defensive tech that we will talk about later, it becomes entirely possible for him to achieve this state of avoiding external damage.

We have to touch quickly on the second column of stats here, as Cosmic Cube goes from completely worth it to not worth it at all as soon as he flips. That being said, power is generally not an issue for a recently flipped Red Skull, so that is something we won’t touch on too heavily in this article, but it is something to keep in mind when putting him on the table. Conditions like Stun and Stagger are also shut down this specific form of power generation. If you think that the opposing side of the table is going to be able to dish those abilities out with ease, he might not be the right option for the situation.

Now, the consistent power gain from Cosmic Cube means a whole lot for this character, as for just an action, this character can get their entire kit online. Cosmic Cube alone doesn’t allow Red Skull to do everything in his kit all at once, but it give him the ability to activate all of this situational powerful options with very little care of the situation that he ended last turn in.

More notable within this framework, and this is going to be one of the few specific times I’m going to call out a place to put him, the way this power generation can supplement a Inhumans team. Suddenly you don’t have to attack to be able to pass power out to your entire team turn 1. He has some competition in this aspect from the likes of Lockjaw, Vision and Baron Mordo, but he outputs more power turn 1 than any of those options. Also, with the exception of Vision, who there is more of an argument about, he brings more longer term value to an Inhumans team, especially past turn 2, than even the affiliated Lockejaw. Allowing for both a Turn 1 Embiggen from Ms. Marvel and turn 1 reposition from Medusa while still having power left to interact with the objective. That alone is a lot of leverage turn 1.

Master of the Cube

This is the ability on Red Skull’s card that everyone is probably aware of. For 3 power, which he can make every turn off of Cosmic Cube, you get to choose an allied character within range 4 and place them within range 2 of their current position. Classically this was used to reposition gun platforms like M.O.D.A.K. for early kill pressure. Now, since the days of Red Skull’s major usage, there have become a fair number more gun platforms that wouldn’t mind the extra mobility to double attack early in the game. Between the likes of Magneto, who Master of the Cube saves an early activation of Astroid M, to adding an extra range 2 plus base of threat of activation to a Thanos, there have never been more big models that don’t mind the extra mobility.

That’s not all that the ability allows you to do, that’s just what Red Skulls leadership has pushed people towards. That being said, as with any movement ability, it is solid on more scenario focused situations as well. Much in the same way as the space gem, you can use this to reposition displaced models back onto the point, or to pull models with important extracts further into safety. As with basically any reposition tool, especially one that can reposition anyone on your team, there is just so much versatility on it that it’s hard to discount.

This, I think in many respects, is Red Skull’s marquee ability, being something that only he can do. The ability to move attacks off of himself and onto other characters is something that is otherwise only reserved for a tactics card. That tactics card, Sacrifice is making a massive showing in the finals of TTS season 7, having a 56% appearance rate in the top 32. Hail, Hydra doesn’t even come with the downsides of Sacrifice either, allowing the targeted character their full suit of defensive options and exploding crits. Hail Hydra also can create some game states that Sacrifice cannot facilitate.

Now, for the simplest example of play, it allows Red Skull to be a fairly safe extract carrier as they are required to displace every other character around him just to get an attack into him. Beyond that though, there are a number of characters in the game that like to get attacked at this point, Venom, Sabertooth, Drax. Not all of these characters are top tier, but if you are consistently playing one of these characters, a Red Skull to supplement their side of the board means that there are even less targets to attack that don’t cause an amount of retaliation towards the opponent.

For me though, the most interesting interactions for this ability are the interactions that it has with grunts. Suddenly we have this new type of character that is not only expendable, but recursive. A body on the board that will just keep coming back, and generally have a benefit when they come out on the board. Suddenly Red Skull has the ability to direct attacks into a grunt to create that recursive value that they designed around to be generated. I think this is going to be especially good with the Ninja’s that come with Shadowlands Daredevil and Elktra, since they come back out off of Daredevil’s and Elktra’s attacks so the opportunity cost of throwing them under the bus is as close to zero as can be.

Finally, I want to touch on Red Skulls suit of attacks. Specifically his builder and his big spender, as both of them are both notably missing something. For his strike, it’s 5 dice builder, which is nothing to scoff at, but it has a wild push, that has no size restriction. That’s right, on his builder, Red Skull can push Dormammu off of a point. Giving him any amount of rerolls from either other characters, or another affiliation means that his displacement become much more consistent.

Then we get into Unleash the Cube, one of the most underrated attacks in the entire game, being 4 cost, which between Cosmic Cube and his single power from the power phase, Red Skull can perform every turn. For that 4 cost though, you get range 4, 7 dice attack, that, if you deal any damage you get to throw the target short. Once again, this has no size restriction, so you can throw Dormammu just by dealing damage with the attack. I am constantly surprised that there is no size restriction on both of these attacks attack. If you are in a leadership that can modify attack rolls in some way to make dealing at least one damage with this attack somewhat consistent, whether that’s through Cable, Green Goblin or Shadowlands Daredevil, this suddenly becomes a both a great attack, and a piece of displacement that is very hard to interact with, especially as it can come out each and every turn.

On top of the displacement, you also have a wild trigger, which you can stack in either order, that gives out Stun, one of the most annoying conditions in the game. Conditions in general are something that I feel are somewhat underrated in the metagame right now, and stun is one of the best conditions that you can give out right now. With the versatility of choosing whether you want to go with the throw or the condition first will allow you to maximize that amount of opponent’s models that you can cripple with this condition.

There are so many things about Red Skull that each individually don’t shout that he’s an amazing character, just a good one. That being said, I think, as a whole package, Red Skull is a piece that can fill in very specific gaps in teams as he is so very consistent at being able to do what he wants to do. With the advent of grunts that there had never been a better time to put Red Skull on the table. As I said at the top, I think he’s a very uniquely shaped cog that when it fit, will do wonders for the machine you are making.

If you would like to find more of my work, check out the Morlocks Podcast.