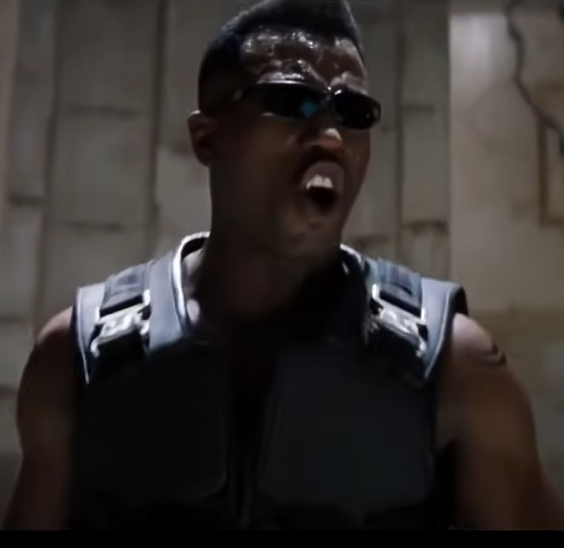 Last time we looked over the numbers and broke down what makes sense for my vision (No capital, not that vision.  Or is it….).

Let’s also keep in mind, my idea is light attrition with bumping off of points to help displace and moving back on. I’m pretty sure I’m taking the two B scenarios so I want hardy characters with displacement.

The two point slot is still in question.  Looking at the builds, I probably won’t NEED it to be affiliated.  Wong is a weird character to really nail down.  So we will leave that slot for last.  Let’s start with four points.

My list of four point models is as follows –

Blade and Doctor Voodoo – In faction, both are basically required.  They are in.

They are vying for one spot.  Possibly two.  Right now I have a 4 who does work and a 4 who is a hybrid of scenario and pew pew.  First pass I think I am going to axe Captain Marvel, she is just too much turret and power hungry, Hela because I don’t think I need the “trick play”, Ronan because his control isn’t reliable, and Venom because I don’t think he is fitting though that pull and the tactics card are nice.

Panther only pushes size 2 so I think he gets cut next.  Kingpin is really interesting but I feel like maybe he won’t have the power so he’s gone.  Enchantress is reliable, Black Dwarf would give me a big body but can be power hungry, Medusa I have been liking but her push is not as reliable anymore.  Hmmm, and then there is Vision, he is great in many situations.  I think I am going to lean on Black Dwarf.  His size 4 gives me an interesting option.  He has the throw.  Locking him in!

For 5 point models I have Doctor Strange (OG), Ghost Rider and Juggernaut.  I need 1.  Possibly 2.  I love Ghost Rider and he’s affiliated.  Without using Hell on Wheels I am not sure how he really fits my plan.  My tactics cards are looking at 2 open slots per game I think since Siege and two restricted are pretty good.  We will leave him out for now.  Strange really fits my plan and opens up my building options for later so he is going to go in.  I do really like Juggernaut though and want to squeeze him in some time to try him out.  Bump gives an alternate option to his push.  Locking in Strange!

For 6 point models I have one in mind.  While I think Magneto actually fits the plan pretty well and does some real interesting things, I want Hulkbuster in the list.  Sometimes, when you are list building, you just say “This person is in” and this is one of those times.  Locking him in but future look at Magneto because the 6 point slot actually lines up with Midnight Sons very well.

On to the dreaded 3 point slot.  Looking through the swift matrix I made, we need at least two that are affiliated and maybe 3 depending on what our plans are for the final slot.  Man, this is going to be tough.  We have 4 slots for definite.  We have three that are affiliated.  I am going to say Black Cat and Moon Knight fit my plan.  Cat can play that chase game if my opponent gets certain scenarios.  Moon Knight gets that spender off all the time in my experience and he is money with Siege.  Two of the four slots locked in.

Beast – I really want to try him in Sons but I think he is out for now.

Black Widow Agent – I like her and the VP’s are cool, circle back

Sam – Love his push and mobility

Drax – Throw, worried he will be power starved but good candidate

Gwen – Who am I kidding, she was in before we started.  I love her.

Luke – Only if I take Fist?  Can’t take both if I take Gwen probably?  Out for now.

Mysterio – I don’t have the experience with him, probably worth trying later

Shuri – Always in Contention, she is money on B’s.

Winter Soldier – Interesting add, probably worth exploring but I think not at this time.

X-23 – I really don’t think I am going for this combo round one after getting this far so cut!

Okay, I have it down to 5.  Gwen is the bomb.  She gets something from the affiliation.  She gives them tons of control.  She’s in.  So we have 4 people and 1 spot.  Sam sam sam.  I think he should be in consideration for every list.  He’s that flexible.  For now, I think he is going to get cut.  He will definitely make an appearance later.  Drax is a pet of mine.  I started with Guardians and man do I love Drax.  He definitely needs to get some testing time in but he’s out for iteration 1.  Lizard and Shuri.  Either one of these could be in.  I am going to start with Lizard but Shuri is on that short list.  Lizard, Gwen, Moon Knight and Black Cat locked in!

The short list!  Yay!  We have 1 slot left.  This is like Great British Baking Show when they are all at the tea party at the end.  I’m going to wait for Hollywood to come out and let us know who won!

Huh, he never showed.  So here I am going to look at the 2’s as well as the runner ups from above.  I’m not convinced I NEED a two pointer.  The way the matrix worked out I was almost forcing it in.  Here’s the short list –

Looking at this list, the two pointer that interests me the most is Honey Badger and mostly for using Siege during her activation.  That being said, I am going to pass.  Thanos is a big meany and Black Order are part of the meta.  I heard on Strike Better (and agree but why not use their clout) that Thanos is a great counter to Thanos.  I think bump gives him another level of threat that people can’t even begin to comprehend.  For now he’s out but I think I might like to try him.  Down to the final Four –

Shuri – Push for days, rerolls on tight scenarios.  She is great on B.

Enchantress – Bow is great, bump to set up beams, has tons of power.

Vision – Again bump and beams plus the throw.

I think any of the four above would make me happy.  I am going to go with Iron Fist I think (sad trombone obvious sound).  I know, a lot of people probably wanted me to take him from the beginning.  Heroes for Hire is a thing and I think my team will be better for it.

This was a long one and I promise the rest won’t be as long.  Up next we will visit Tactics Cards!  In the meantime, feel free to comment below and leave your thoughts.