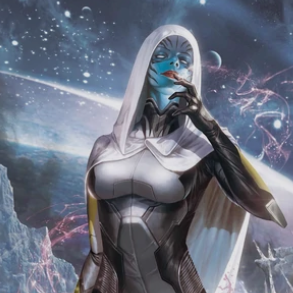 Another Monday, another First Impressions! This time, Supergiant:

Another character from outside my (total lack of) comics expertise, Supergiant is a “mentally unstable omnipath and telepathic parasite who seeks out intellect and devours it”. Which apparently is MCP code for “weird AF”. Without further ado, lets dig in!

5 stamina each side, small base + short move with a 1/3/4 statline is… eccentric to say the least. I won’t fault her physical because there’s a reason for it but I WILL fault her for her speed. Short move small base is SLOW. Painfully slow. She does have a r3 attack, but I would hesitate to play her any time I need someone on the midline.

As far as 3 threat builders go, this is a pretty solid one. The Mystic cousin of Omega Red’s Carbonadium Coils (with flat power generation) is a potent and concise package for a 3 threat.

An odd duck of a spender. Reminiscent of Ghost Rider’s Penance Stare but far, far worse – unless you hit the jackpot. I also question how often she’ll be in r2 (or even move + r2) of an enemy to truly take advantage of this. That said someone eventually WILL get that Devour Mind trigger and feel like a god.

Continuing the trend of weirdness so far, Supergiant pushes the envelope further with an x-cost long range interact superpower. I’d be a lot more impressed if there were more Civilian tokens it could interact with. At the moment it can only interact with Skrulls, Spider-Infected or the Senator once found (cannot be used to search the safe houses). Perhaps there’s an angle here I’m not seeing but it comes off INCREDIBLY corner case.

I’ll admit, push blocking interests me. Lots of control teams are pushing right now, with throwing a close second and advancing a distant third (of course Thanos is out there pushing, throwing, advancing, AND placing your heroes). That said I question her power economy, especially into the kind of teams playing for control. On the other hand, maybe this IS consistently relevant considering her Spender seems borderline unplayable and on most maps you can’t even use Submit. And bad Indomitable on a stick is still situationally back-breaking.

This right here is the real money. If there is ANY play for Supergiant it is between abusing this and her builder to completely stonewall physical heavy teams like Avengers or Brotherhood (though Rapid Fire can rain on that parade) while blocking any attempts at displacement with her Supreme Control. Dropping extracts is not ideal but with how slow she is you probably already don’t want her holding anything important. It’s going to take a lot of games to dial in how hard you can push things with this but it seems situationally back breaking.

A nice way of mitigating the advantages of your opponent when they roll well, although unless your tactics suite is begging for someone to pay it all or you’re into a pull heavy team I’m not sure how helpful a powered up Supergiant will actually be.

To be honest I’m not sure if you want to put the Soul Gem on her. As a 3 she might see play occasionally, as a 4 I feel she has too much competition, and the bonus power doesn’t seem to spend well enough – push blocking notwithstanding.

Overall I’m intrigued by Supergiant. Being tied for slowest model in the game is a MASSIVE turn-off but she’s another in a long line of Mystic-focused 3 threats that are a bunch of oddball abilities, and Mysterio, Clea and Mordo have all felt situationally brilliant to me. Who’s to say that she won’t end up the exact same way? Playing her into Wakanda or Web Warriors seems quite enticing, as well as attempting to go toe-to-toe with physical powerhouses like Avengers and Brotherhood. I have conviction that the right player will one day make her shine, in this meta or another. On the bright side, if she ever finds her groove she’s super easy to splash as a 3 threat!