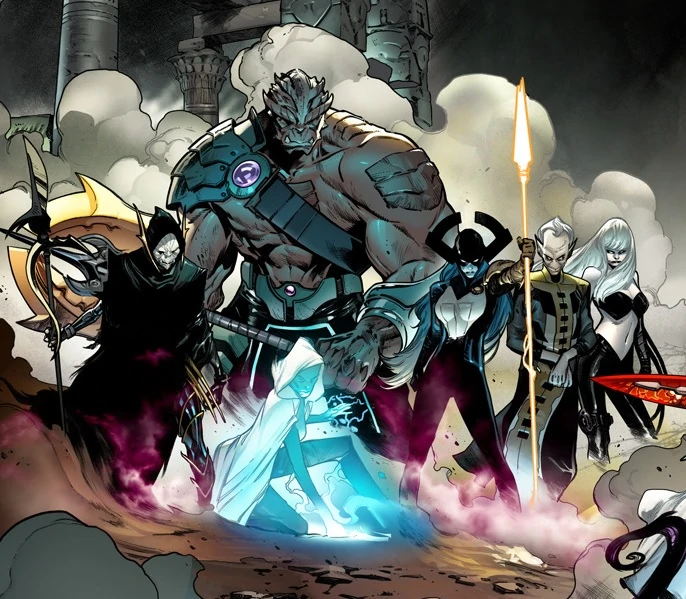 I was playing the Black Order roster that I described in my last article (https://acrossthebifrost.com/2022/05/25/the-diary-of-a-dreadlord-day-1/).

My opponent was running an X-Men roster.

I won priority and chose secures. This is because my opponent had SWORD, which I really did not want to play on at 14 threat. Honestly, all of my opponent’s extracts, except Hammers, were not great for Black Order, since he had very wide extracts, namely Cubes and Spider-Infected, and pay-to-flip secures. I ended up pulling Extremis, and my opponent pulled Cubes. I chose a squad of Reality Corvus Glaive, Power Black Swan, Ebony Maw, and Toad. I did this, since I wanted to use Toad to grab the center cube as safely as possible, since my opponent, using their Toad and Storm’ leadership movement, can safely grab that cube fragment, gaining an extract lead. With 15 points left, I chose to play my three 5-threat characters, which gives me the option of deploying Ebony Maw and Black Swan on opposite sids of the table, enabling me to easily Mothership in Corvus on either side of the table. In hindsight, It might have been better to play Reality Corvus Glaive, Power Black Swan, Proxima Midnight, Bob, and Toad, since Bob and Toad can grab cubes and sit on secures and Proxima Midnight helps deal with X-ceptional healing by bring more attacks during my aggressive priority turns. Another option would be playing Mind and Space Thanos, Reality Corvus Glaive, and a 4-threat. I shied away from this, since I wanted to try out some of Black Order’s new toys. For tactics cards, I took: (1) the new leadership card (First of the Black Order), since I was taking Corvus Glaive and not taking Thanos; (2) my healing card, which is especially good on Cubes; (3) Advanced R&D, to guarantee Black Swan the option of charging and Mothershipping in Corvus Glaive in Round One; (4) Mothership; and (5) Shhh…, since I was taking Ebony Maw.

As previously mentioned, my deployment plan was to have Toad be in the center to grab the center cube fragment, have Ebony Maw and Black Swan on opposite sides of the board, and have Corvus hanging out ready to be Mother shipped in or double walk to a point. My opponent places X-23 and Cassandra Nova on my left side and Storm, Wolverine, and Toad in the center-right. With this placement, my opponent tried to maximize their options for using Storm’s leadership. My opponent can use it to place Toad off of Storm to walk up, grab the center cube with his range 2 interact, and walk back. Alternatively, he can place Wolverine off of Storm and walk up and spender using No Matter the Cost. My opponent also had the option of grabbing their left cube with either X-23 or Cassandra Nova, setting up the other to place off of that cube carrier. My opponent ends up doing none of these, but this illustrates the importance of deployment.

As planned, I started off by having Toad double move to range 2 from the center cube and grab it. In response, my opponent moved up Storm and attacked Toad with her builder, doing three damage. This allowed me to Slippery Toad back onto my point. I passed. He walked his Toad up and grabbed a cube.

My opponent then played To Me my X-men moving up X-23 and Wolverine. Wolverine then uses Storm’s leadership from his Toad and No Matter the Cost to Beserker Barrage Black Swan. This did three damage to Black Swan and throws her into a crate. In response, I Mothershipped in Corvus off of Black Swan. Wolverine with X-ceptional Healing is a tough nut to crack. However, X-23 and Cassandra Nova also can use X-ceptional Healing, so I felt that I was going to have to chew through it eventually and wanted to get Corvus started dealing damage as soon as possible. However, the best-laid plans of mice and men often go awry. Corvus’s first strike does zero damage. His second strike did do three damage, but that left Wolverine with four health and X-ceptional healing. After Corvus’s activation, my opponent has Cassandra Nova walk up, grabbed a cube, and moved close to the center of the board.

At that point, I only had Ebony Maw to activate. Unfortunately, I think that my choices during this activation made the game very difficult for me to win. I should have been thinking about using Advanced R&D on Ebony Maw to give Corvus enough power to strike twice with Glaive’s Edge at the top of round 2 and/or to give Black Swan enough power to double Everything Dies. However, I am still not used to the Advanced R&D change, which is something that needs to be fixed. Another thing that I needed to focus on more was denying my opponent a good response to my priority play with Corvus Glaive. I, generally, think about this when I activate Thanos, but I am not playing him in this game. In order to try and maximize my round one VP advantage, I had Ebony Maw grab the closest cube and walk onto the left secure, putting him in walk strike range of X-23. If X-23 does damage with that attack, this move with Ebony Maw give my opponent the opportunity to try and daze Ebony Maw before he gets to go in round 2, since I am planning on going first with Corvus Glaive to daze Wolverine. Since Ebony Maw has a cube, losing that is probably not worth contesting an Extremis secure. To protect the cube fragment, I probably should have just had Ebony Maw sit on my home secure. Ultimately, my opponent punishes me for my decision to move up Ebony Maw by advancing X-23 onto the point and striking him for three damage, despite him rolling six defense dice. Round 1 ended with me up 4-2.

At the top of round 2, I had the choice of going with Corvus Glaive or Black Swan. Per my comments above on Advanced R&D, neither Corvus Glaive nor Black Swan have enough power to use two powerful attacks. I maybe should have used Black Swan here and used Eye Beam followed by Everything Dies, but I went with Corvus Glaive instead, trusting in his dice consistency. Corvus proceeded to do 1 damage with his first strike and zero with his second strike. My opponent didn’t even have to use X-ceptional Healing. In order to try and get to activate Black Swan, I played Path Up and had Corvus spend three power to heal Black Swan for three.

In response, my opponent went with X-23 and dazed Ebony Maw, picking up the cube that he dropped. I retaliated by having Black Swan Eye Beam and Everything Dies into Wolverine, dazing him and giving Corvus one power using Corvus’s leadership. My opponent then used Storm’s leadership to place Storm off of Cassandra Nova, had Storm move towards my Toad, had Storm throw a car at Toad and daze him, and, finally, moved Storm onto my home secure. My opponent then has his Toad walk up and grab the cube that my Toad dropped and Cassandra Nova move onto his home secure. Round 2 ended with me trailing 6-9

At the top of round 3, I had the same decision as at the top of round 2; I could either try and take down Wolverine with Black Swan or Corvus Glaive. Since my opponent still had X-ceptional healing, I opted for going with Black Swan, because she, likely, could make more attacks than Corvus by using Eye Beam and Everything Dies. Unfortunately, Black Swan only did four damage to Wolverine with these attacks. Wolverine proceeded to use Berserker Barrage into Corvus, dealing five damage and throwing him into Black Swan. This dazed Corvus and did two damage to Black Swan. Wolverine then did a strike into Black Swan, dazing her and dropping her cube. I then activated Ebony Maw and dazed X-23 using his spender. I had him pick up the dropped cube and sit on the secure. My opponent had their Toad run back onto their home secure. In response, I had my Toad move, hop, grab the cube that Black Swan dropped, and move unto the right secure. My opponent then has Cassandra Nova move, Mind Possession my Toad, move my Toad off of the secure, and advance onto the left secure. I had my Toad slippery back onto the secure, which was probably unnecessary. Storm just sat on my home secure. Round 3 finished with my opponent having an insurmountable lead and a score of 9-14.

I made some misplays this game, and was punished for them. Also, my priority-based attack plans often failed. The two dice from Thanos’s Death Decree definitely helps make that more consistent. Towards doing that, I am heavily considering bring in One-Two Punch. Having Proxima also makes those plans more consistent, which is something I really need to consider. It may also be the case that hard alpha-striking with Corvus and Mothership on round one, which is what I default to doing, may not be the best way to play this type of Black Order set up. For instance, it may have been better to Mothership in Ebony Maw to deal with Wolverine using mystic attacks and Ebony Maw’s throw. I will have to do more testing to figure this out. With the delay of Ministravaganza at the time of writing this article and more information on tactics card rotation, I am planning on bringing back in Medpack and Grievous Wounds. During the game, I also saw that Ebony Maw can’t necessarily hold a flank on his own against a strong attacker. This could be helped in certain situations by bringing Blind Obsession, but I do not know if I will go that route. Overall, my opponent played well this game and deserved the win. Hopefully, I can learn from my mistakes and become a better Dreadlord in the future.