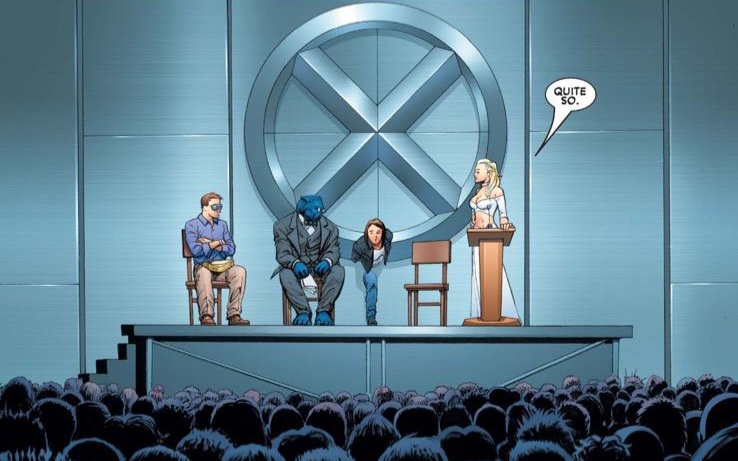 I have been meaning to create this for awhile now. I want to have a single article that makes it really easy to link to the core X-men podcasts. I will do my best to keep this updated as new episodes release. Feel free to message me on discord if there is one that you think I am missing.

This episode goes back to the first year of MCP. Shortly after X-men came out, I joined Jesse on Fury’s Finest and we built a roster from scratch. While this is old, its interesting just how close we were to what eventually became the core strategies for playing X-men Gold.
https://open.spotify.com/episode/7IsGxlCgoVR6hE0bnLn0Jk?si=Pxmzfd2AQJCC-qUrQ2UFgg&utm_source=copy-link

One of the most listened to episodes of Omnus Protocol. This is my recap of all my games at Adepticon. While this roster was before the changes to Standard, all the fundamental X-men play is here.
https://anchor.fm/OmnusProtocol/episodes/X-men-at-Adepticon-e1gn3u9

This is a great Danger Room episode where they bring on Twity to discuss how he had been doing with X-men in the TTS Season.
https://anchor.fm/the-danger-room/episodes/The-X-Factor-e1gm1hq

CoffeyTime guested with me to cover his version of X-men. He tends to play with less splash Characters and more actual X-men.
https://anchor.fm/OmnusProtocol/episodes/The-X-Protocol-e1jbhdv

I joined the Danger Room crew to talk about the unique strategies that make X-men work. This isn’t really about a specific roster and more about the tricks that only Storm’s leadership can pull off.
https://anchor.fm/the-danger-room/episodes/Professor-X-Hair-e1insr6

Ghostdeer had been experimenting with his take on X-men and he joined me for an episode to dive into his unique builds.
https://anchor.fm/OmnusProtocol/episodes/Ghosting-X-men-e1llqft

Simon aka Vodkablitz comes on OP to talk about his roster and his successful run to the season Top Cut.
https://anchor.fm/OmnusProtocol/episodes/Gold-in-Top-Cut-e1mq1ei

Jesse (Fury’s Finest) wins LSO with X-men and this is the episode where we go over the games and the subtle roster choices that he made for this victory.
https://anchor.fm/OmnusProtocol/episodes/Storms-Finest-e1lu9s7

Ghostdeer takes down Second Wind with X-men and recaps the games with me in the Malekith/Avengers Heist Meta.
https://anchor.fm/OmnusProtocol/episodes/Nothing-Stops-the-GhostDeer-e1q0a3e

Ghostdeer also goes into more detail on a few key moments from his Second Wind games here. This episode does have some general info about Second Wind and isn’t all about X-men but in my opinion its one of the best podcasts of the year.
https://strictlytheworst.libsyn.com/raw-maw

https://t.co/hzdcCVHPyRThis episode breaks from the normal build. Simon and I discuss the X-men Red roster which features Red Skull, Master of Hydra, Red Guardian and Colossus as the most important characters. This can be a nice alternative if you want to play X-men different way or you just want a more aggressive version of X-men.
https://anchor.fm/OmnusProtocol/episodes/X-men-Red-e1r2u9d

Jesse at Fury’s Finest recorded a follow-up episode about his journey into X-men Red and I guest hosted this one.
https://t.co/hzdcCVHPyR

Danger Room recorded with Simon for their Christmas Present Initiative and he broke down his favorite Storm roster.
https://spotifyanchor-web.app.link/e/cZiC5YP1Hvb

Across the Bi-Frost has an X-men focused affiliation episode. Pat and TT provide some good insight and it is worth a listen.
https://soundcloud.com/tseung-tsu/across-the-bifrost-ep-125-x-men-re-review

Gamer’s Guild recorded an episode on Storm’s Leadership in their Affiliation Breakdown Format which brings their own unique insight.
https://anchor.fm/thegamersguild/episodes/EP-24–Storms-X-Men-Gold-Affiliation-Breakdown-e1k8e92

I will not be adding episodes about the individual characters or expansion packs but I will continue to update this with more episodes as they come out!
~Omnus