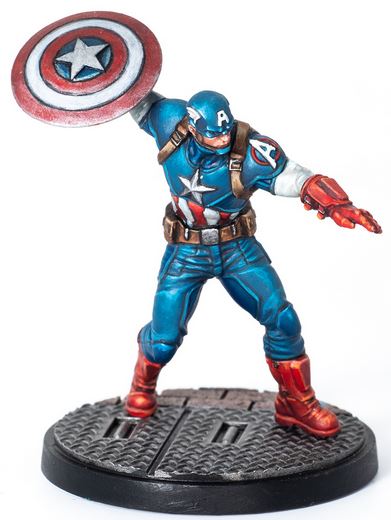 Ah Cap, the natural leader; king of the impromptu speech, always ready with the right words at the right time to get the team fired up and ready for action.

As leader of the Avengers affiliation straight out of the core box what does Cap contribute to your roster? Let’s dive into his character sheet and see what he can do.

STAMINA – At 5 Cap is no slouch in the stamina department.  He should be able to survive a few good hits before becoming dazed.

MOVEMENT – With a medium movement Cap is mobile enough.  He’s no Black Widow or Spiderman, but considering his other abilities he isn’t the guy you will be using to run around the board securing objectives.

THREAT – At 4 threat Cap is a fairly average cost, but I think he more than earns his place on your roster when you take into account his powers and leadership ability.

DEFENCES – Cap is all about the defence, and rolling 4 dice against a physical or energy attack is no bad thing.  He is a little weaker at defending mystic attacks, but that makes sense thematically I suppose.

ATTACKS – Strike is a fairly standard… er… strike, with a range of 2 and a strength of 5, and with no power cost.  As is standard for most of the free strikes you gain power equal to the damage dealt.  A wild roll will let you push short a character who is size 2 or less.  This is a nice touch and rounds out Cap as a defensive character.  Imagine he is defending against a character who can only move short.  If Cap rolls a wild and pushes the defending character short, that is an action lost for this character because he/she will have to move short to get back to where they were.  This is great for a little bit of objective control, or just to shift characters out of range of your allies.

Next up is Shield Throw, an attack with range 4, strength 4 and, again, no power cost; so slightly more range but slightly less power than the standard strike.  The advantage of this strike is that it totally ignores line of sight and the defending character does not get cover.  This attack is more powerful than it may at first seem, imagine you have an enemy character around a corner who is benefitting from cover and who has little health remaining – perhaps they are fleeing from your attacks.  Fire off this attack without having to move into line of sight and then totally negate the benefits they have gained from moving into cover – this attack could be the difference between leaving them on 1 health and finishing them off.  And best of all if you roll a wild you get to activate ricochet which lets you make an additional Shield Throw attack targeting another enemy character within range 3 of the original target character.  If you have a nice cluster of enemy characters near Cap why wouldn’t you try and pull this off, it’s a 2-for-1!

Lastly we have Shield Slam, a range 2, strength 6 attack for a cost of 2 power.  Not only is this quite a powerful attack for quite a low power cost, but if the defending character is size 2 or less you can throw them short after the attack resolves, giving potential for a little extra damage from a collision with terrain or another character, and also useful just for shifting them out of range of attacking your allies.

Cap has some good attacks.  He is potentially not a high damage-dealer, but his attacks seem focused on doing what damage he can and then moving the enemy character where he wants them to be.  This is going to be great for area control and to protect allies.

LEADERSHIP ABILITY – Cap has the Avengers Affiliation called A Day Unlike Any Other which means that each turn you can reduce the power cost of the first superpower used by each allied character by 1, to a minimum of 1.  Remember that each activation of a character is a turn and once all characters are activated that is a round.  As such you could discount your first superpower in an attack made by an affiliated character, then if that character is attacked on your opponents turn you can also discount the cost of any reactive superpower because this would be occurring on a different turn to your attack activation.  The leadership ability clearly states this discount applies per turn not per activation, so fire it off to your hearts content, even on your opponents turns if your superpowers allow you to do so.

SUPERPOWERS – Ah yes, let’s get down to the biscuits.  Cap’s first superpower is Bodyguard, a reactive superpower, and yet another ability that proves what a defender Cap is designed to be.  If an allied character within range 2 is targeted by an attack, in comes Cap to fend off the attack himself regardless of range or line of sight, and for a mere cost of 2 power.

As we discussed earlier, Cap is no slouch in the defence department with a physical and energy defence of 4 and a mystic defence of 3.  If you have some weaker characters on the board get Cap in among them and fire this superpower off to keep them alive for much longer.

Vibranium Shield is the next superpower, again this is reactive, and also has a power cost of 2.  This superpower can be triggered when Cap is targeted by a physical or energy attack, and it allows 2 dice to be added to the defence roll for this attack.  That’s 6 dice in total – a potentially powerful defence!  Imagine this combined with Bodyguard – a weak allied character near to Cap has just been targeted by a physical attack, in jumps Cap to redirect the attack to himself, plus he gets to roll 6 dice to defend it!  An absolute defensive powerhouse if you can afford to pay the required power cost.  Plus, you could potentially discount one of these superpowers with Cap’s leadership ability (if activated), PLUS on Cap’s turn you have the potential to attack the enemy character and push/throw him away!  What a monster!

I recently lost a game because of Cap’s defensive abilities. Spiderman had 3 Cosmic Cubes and I was chasing him around the board with Ultron. Spiderman just parked up next to Cap who just kept on defending for Spiderman so I couldn’t daze him to make him drop his objectives.

INJURED SIDE – Eventually Cap will become dazed and will flip to his injured size.  And what happens then?  He becomes even harder to beat!  His stamina increases by 1 to a total of 6 and he gains the innate superpower I Can Do This All Day.  This superpower is free and allows blanks in Cap’s defence rolls to be added to the total successes in the roll. A-MAZING!  Just when you thought Cap was on the ropes up he pops and becomes an even tougher nut to crack!

SUMMARY – Cap is hard to kill for sure.  Ultimately, as with all things, it will come down to dice rolls – sometimes you will get unlucky and he will potentially have to take some big damage.  The Patch Up team tactics card could come in handy if you are up against some hard-hitting enemy characters, by allowing a nearby ally to spend power to heal him.  Imagine how annoyed your opponent will be when he/she nearly has Cap tabled and then all of a sudden he is back to near full health!

I Can Do This All Day really bolsters Cap’s already great defensive abilities, and he has the potential for being super-annoying by throwing/pushing your characters short when attacking him or trying to get close to an objective/character which he is defending.

Playing him as part of an Avengers line-up so that you can activate his leadership ability is just great value, getting a discount on superpowers every turn will gain you huge benefits over the course of an entire game.

Cap seems to work best when right in amongst it, staving off enemy attacks, protecting his allies and doing a bit of area control.  Leave those far off objectives to the fast movers!

How have you found Cap to be?  What cinematic moments have you had with him?  Comment below!