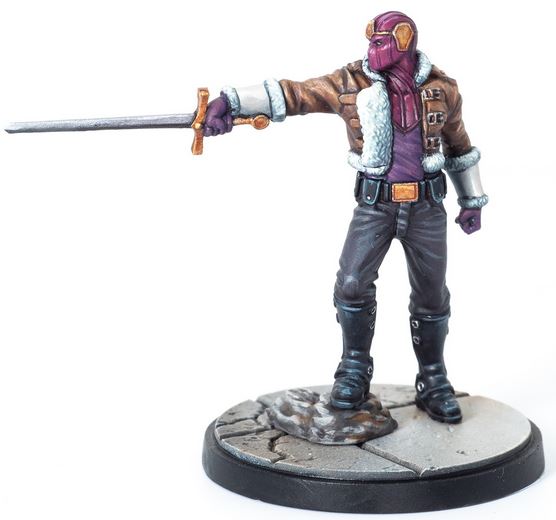 Nothing screams “man” more than a bomber jacket over a pinkish vest and purple polo-neck… right? How does the professional Avenger-botherer work in the game and, more importantly, how does his drink with that balaclava/crown combination? Let’s see.

STAMINA – 5 stamina for Baron Zemo – a decent enough number for a fighter.

MOVEMENT – Long is the movement of Zemo. He can hit up those objectives quickly and get in close for an attack whilst doing it.

SIZE – A standard human size of 2.

THREAT – A little cheaper than you might expect at a threat cost of 3. Should we expect some weaker abilities to reflect this? Read on!

DEFENCES – Zemo has got it going on when it comes to defending mystic attacks, with 4 dice rolled – perhaps the purple balaclava really is useful after all? Physical and energy defences are a little lower at 3 which is fair enough.

ATTACKS – Zemo’s standard zero power cost attack is called Sword Strike and will gain you power equal to the damage dealt. A wild will also allow you to make the defending character bleed (the character suffers 1 damage at the end of each of its activations), either causing extra damage (for which they will not gain power), or robbing them of an action to shake the condition. An extra damage may not seem like much, but we are dealing with characters with low stamina levels to start with, so it could easily add up and every little helps. Either way it is a win for you.

His next attack is Steel Rush, which upon initial inspection may seem to be some kind of 80’s power-rock tribute band, but in fact turns out to be a range 3, strength 6 attack with a power cost of 2. And what do you get for this princely sum of 2 power? After the attack is resolved you can advance Zemo medium. Let me say that again, after this attack is resolved YOU CAN ADVANCE ZEMO MEDIUM! You get 2 actions per activation. If you can pull off 2 of these attacks then for the princely cost of 4 power you have attacked twice and move double-medium. Now that is economy! And on top of all of that roll a wild and once again you get to make the defending character bleed, I almost feel sorry for them. Can you picture how this would play out if the game were real life, Zemo is basically doing a drive-by stabbing and leaving a sea of red in his wake.

That’s it for attacks, let us now talk of powers that are super.

SUPERPOWERS – First up we have the active superpower Charge wherein for 2 power we can make a move action followed by an attack action. Again, we see Zemo’s economy at work. 2-for-1 on actions is never a bad thing.

Next up we have the reactive superpower Counter-Strike. It costs 2 power and will get you a free attack after an attack against Zemo is resolved, as long as the attacker is within range 3. If this condition is met then Zemo gets to roll 4 dice and deal a damage for every wild and critical rolled. Best of all, the enemy character cannot defend against this attack! The best advice for when attacking Zemo would be to stay outside range 3 by using a character with long range attacks, or suffer the consequences!

Master Swordsman is Zemo’s third superpower and again it is reactive. It has a cost of 2 and allows Zemo to reroll any number of attack or defence dice when Zemo attacks or defends a physical attack from a character within range 2. Don’t do melee physical attacks against Zemo people!

Last of all we have the innate superpower Strategic Genius which has no cost (woohoo) and states that whilst within range 2 of Zemo, allied characters may reroll one die in their attack or defence rolls. Wow. Zemo passing on dice manipulation to nearby allied characters, that has the potential to be a strong ability. And don’t forget that characters are always allied to themselves as well so Zemo will get to take advantage of this power.

INJURED SIDE – Nothing changes on Zemo’s stat card when he flips, except for the art wherein he looks a bit tattered. But really, with a healthy side this good who needs anything more on the back?!

SUMMARY – Zemo is absolutely oozing with action economy. If you see him across the table one way to deal with him would be to try to get special conditions stacked onto him, especially stagger to rob him of one of his actions, and stun to keep robbing him of power to spend on his superpowers. Additionally, keep out of his close range so as to avoid his nasty superpower effects. If you have characters with physical or energy attacks use them on him as he is a little weaker at defence, just make sure you do it from a distance or you may regret it!

If you are playing as Zemo you want to be up in people’s faces, maximizing on his economy for as long as you can. Use your standard strike to gain the power you need to stockpile for your Steel Rush and your superpowers and watch your opponent quiver with fear!

A few team tactics cards stand out to me when thinking about Zemo. Dark Reign (if running the Cabal affiliation) will allow you to select an enemy character and then every time that character is attacked this round you reroll attack dice, improving the chances of Zemo’s damage getting through and potentially getting bleed onto the character. Also, Trip Up could be good if Zemo is in a group of allied/enemy characters, as you will be able to get stagger and stun onto the enemy character – especially handy if that enemy is Hulk! Seeing Red is another option, spending 3 power to make a free attack aginst an enemy who just hurt an allied character within range 2 – it is like a small, rectangular Zemo! Lastly I thought One-Two Punch could be a good one to play if you have an allied character within range 2, paying 1 power each to add 2 dice to the attack roll could be just enough to finish a character off.

How have you found Zemo to be?  What cinematic moments have you had with him?  Comment below!

Okoye in 1 min or less

Black Panther in 1 min or less

Painting the No Expectations Mural from Into the Spider-Verse