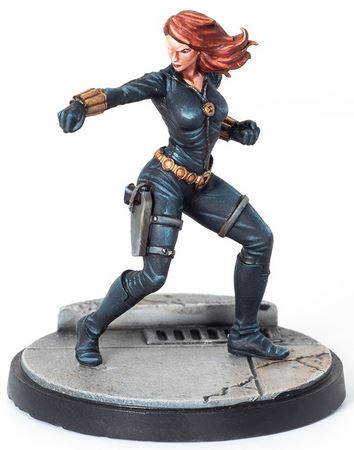 She wears black, and apparently her husband died at some point – she’s Black Widow! She’s a spy, an agent and a vauable member of The Avengers. But how does she work in-game? Read on!

STAMINA – At 4 she is a little weaker than other characters in the core set. But of course, you have to be able to hit someone to do damage to them…

MOVEMENT – Just like Baron Zemo, Nat is a long mover. It is the longest movement in the game and, therefore, the best.

SIZE – Like so many humans before her she is size 2.

THREAT – 2. Yes you read that right – 2! At that cost why not just throw her into a roster as a gap-filler, she will more than earn her place.

DEFENCES – Widow has a physical defence of 3 and an energy defence of 2 – fair enough as she wears no armour. But with a mystic defence of 4 she has the mental fortitude to fend of most average attacks without too much damage – a result of the conditioning received in The Red Room perhaps?

ATTACKS – Nat’s standard zero power cost strike is called… wait for it… Strike and allows her to gain power equal to the damage dealt. It has a range of 2 and a strength of 4. A wild will let you trigger the evocatively titled Widow’s Sting which allows you to rob the attacked character of 1 power after the attack resolves – have that! If you can see someone stockpiling power ready for a big attack maybe consider zooming in with Nat and putting a spanner in the works.

Next up is Pistol, a basic attack of range 3, strength 4 and zero power. Handy if you need to hit someone but aren’t quite in range for her standard Strike.

Her last attack is Mixed Technique and will cost you 2 power. And what do you get for this 2 power? A range 2 attack with a strength of 4 that will allow you to stagger your opponent if you do damage to them with this attack. Plus, roll a wild and trigger Elusive to allow you to advance short. Combine this with a long movement and Black Widow has covered a lot of ground in 1 turn.

Enough with the attacking! What superpowers does this non-superpowered human have?

SUPERPOWERS – Up first is the reactive superpower Counter-Strike. Just as with Zemo you can attack an enemy back and score hits on criticals and wilds if you pay the 2 cost and if the enemy is within range 3. Straightforward enough and very nice when your opponent forgets about this superpower!

Next up is the innate superpower Martial Artist which has no power cost. If Nat is being targeted within range 2 by a physical or energy attack then she gets to add blanks in her defence dice rolls to her total successes, just like a mini-Cap! So, basically, don’t attack Black Widow at close proximity unless you are attacking with a HUGE dice pool.

Last up we have the innate Stealth superpower which states that characters have to be within range 3 to target Blck Widow with attacks. Ouch! No distance attacks from Iron Man then!

So, don’t attack from within range 2 but be within range 3 – that’s your Black Widow attacking sweet spot! Any team tactics cards that allow pushes would be great for protecting Nat – getting the enemy character outside of range 3 and thus making them unable to target her. Failing that keep her moving long and picking ojectives to avoid as many attacks as possible.

INJURED SIDE – No change on the injured side other than ripped pants, face scratches and wilder hair.

SUMMARY – Nat is low threat, and this is going to make her an auto-include in so many rosters until we get more low threat characters. The criteria for hitting her with attacks are tight too so she is going to be tricky to pin down, especially as she will be moving long as well. As Nat is so rapid and tricky to hit she is an obvious candidate for objective grabber. As such Mission Objective would be a good card to have in hand as she will be a clear target to the opposing player who wants those objectives to his/herself. Escort to Safety is another one that springs to mind should you find Black Widow to be in a pinch and you want to try and avoid the damage from an attack. Drop Off is another obvious choice to get Nat to those tasty objectives even quicker (if you have flying characters in your team of course).

What think you of Nat? What cinematic moments have you had with her?  Comment below!