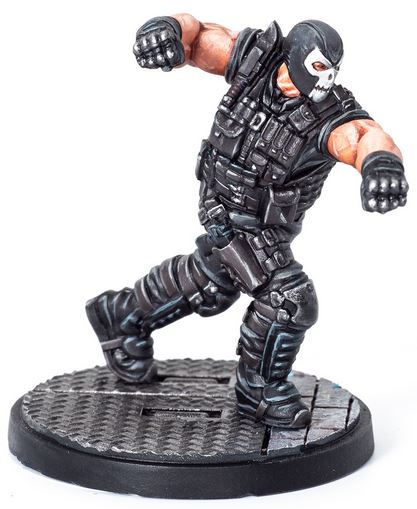 Not to be confused for his younger brother “Angry Muscles”, what does old Brocky bring to the table?

STAMINA – 6. Absolute unit. It will take a few goes or some lucky rolls to brig him down.

MOVEMENT – Oh short, the least long of the movement tools. It may take ‘Boney a while to get where he’s going, but once he arrives your enemies faces will know about it!

DEFENCES – Crossbones is all set up to fend off those physical attacks with a physical defence roll of 4. Come at him with energy or mystic attacks though and he will crumble quicker than a criminals alibi in court, with defensive rolls of only 2 dice respectively.

ATTACKS – Strike will let you roll 5 dice against a target within range 2 for free if conditions are right, and will net you power equal to the damage dealt. Overpower is a bit more interesting, it being a range 3 attack with a strength of 5 and a power cost of 2. After this attack resolves you can place Crossbones within range 1 of the target. Plus, roll a wild and you can trigger Throw which will let you throw the enemy short if the target is size 2 or less. The order on the attack is a bit jumbled on the stat card, but basically you can determine the damage to be dealt, then throw the defending character short, then place yourself within range 1 of the target. A handy way of getting Crossbones that little extra movement he needs to compensate for only being able to advance short.

That’s enough punching, let’s look at his superpowers which primarily revolve around… punching!

SUPERPOWERS – The active superpower Haymaker will cost you 4 power, but for that payment you get to add 3 dice to Crossbones attack pool for the next Strike or Overpower attack he makes this turn. That’s 8 attack dice! Don’t mess with the best! Although, if your rolls are anything like mine in the game I played last night every dice will be a blank or a failure.

Inured (yes, it is a word) to Pain is up next with a whopping cost of 1 power. It is reactive and states that if Crossbones would suffer damage, activate this superpower to reduce the amount of damage suffered by 1. There is no minimum (unlike Iron Man’s ability). A straight up swap of 1 power for 1 healing is fair enough, 1 damage can be the difference between being dazed/KO’d and being healthy, and that could swing a round in your favour (or otherwise).

INJURED SIDE – The main changes seem to be that Crossbones loses the majority of his sleeves, starts emitting smoke from his ams and back, oh, and loses a stamina point by dropping down to 5, making him slightly easier to despatch.

SUMMARY – Crossbones is a damage-dealer, pure and simple. He may take a while to show up on the field, but when he does your enemies better scarper quicksmart. Overpower is such a great attack if you can get everything to trigger, especially when combined with the extra dice from Haymaker, as it will allow that little bit of extra movement that ‘Boney needs to get him where you need him a bit quicker. He is also an obvious candidate for Red Skull’s Master of the Cube superpower which will allow an allied character within range 4 of Red Skull to be placed within range 2 of its current position. If you can get Red skull to place Crossbones in a prime location then fire off Crossbones’ Overpower on the next activation you will definitely be covering some ground.

Team tactics card-wise Gamme Launch springs to mind, if you are running Hulk in the same team as Crossbones. Spending Hulk’s 3 power to launch Crossbones within range 5 of his current position can get him to where he needs to be to start dealing out damage. A.I.M Lackeys also stands out, paying 3 power from M.O.D.O.K to allow Crossbones to do an additional free movement this round. Trip Up could also be good if you are doing some powered-up Crossbones strikes with an ally nearby, allowing you get hit the target character with the stun and stagger conditions. Recalibration Matrix too if you desperately need to reroll a big attack or weak defence, and One-Two Punch if you really want to stack up the dice quantity for an almighty attack.

How have you found Crossbones to be in your rosters? What cinematic moments have you had with him?  Comment below!

Okoye in 1 min or less

Black Panther in 1 min or less

Painting the No Expectations Mural from Into the Spider-Verse