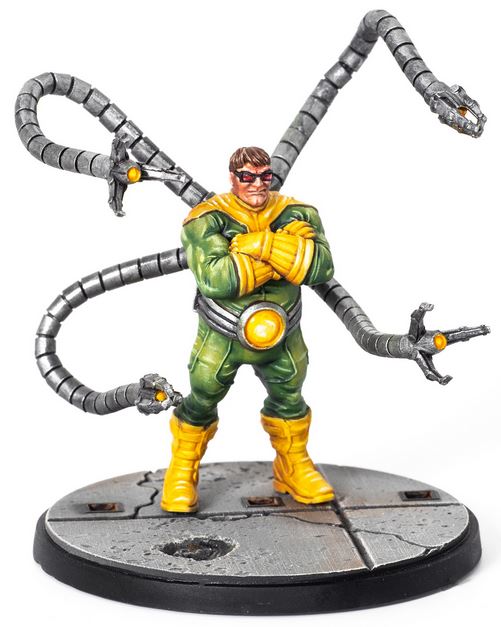 Dr. Otto Octimbianus Ottoticus Octaviana Octopussy Octavius, or Doctor Octopus for short, is our next character to look at. How does the green and yellow tentacled wonder work out in the game? Read on!

STAMINA – With a stamina of 5 Ockles can take a few hits before dropping.

MOVEMENT – Medium – not quite long, not quite short.

SIZE – As is standard for humans in this game, size 2 is the word of the day here.

DEFENCES – Ock has a pretty good spread of defences, with 4 dice for physical, 3 for energy and 4 for mystic. That higher mystic defence is going to mean a lot more as more and more mystic attackers are added to the game (M.O.D.O.K and I assume at some point, Dr. Strange).

ATTACKS – Ock has 2 standard attacks. The first is imaginatively named Strike and for zero power cost will let you roll 4 dice over range 3. As is usual Ock will gain power equal to the damage dealt. A wild will net you a Flurry of Arms which will allow each wild rolled to count as 2 successes rather than the standard 1. If you get lucky and roll multiple wilds you are potentially going to be doing some serious damage.

Second is Arm Lasers, and you will be forgiven if you read that in a Dr. Evil voice whilst doing air quotes. A strength of 6 over range 4 is powerful and a cost of 3 power seem fair. As an added bonus this attack ignores line of ight and the defending character does not benefit from cover. On top of that, a wild roll will net you pierce which will allow you to change one of the defending players criticals, wilds or shields to a blank. Dice manipulation? Yes please. With a good roll this could be a very powerful attack indeed.

SUPERPOWERS – Up first we have the active superpower Ock’s Clutches which will allow you to choose a terrain feature or character of size 2 or less within range 3 and throw it short, all for a cost of 3 power. Range 3 is a good distance, and this superpower will be great for objective control, or just for finishing off a pesky enemy character.

Next up we have 2 innate superpowers – Scientific Hubris which states that whenever Doc Ock rolls dice and after the effects are resolved he gains a power if he rolled at least 1 critical. It is surprising how often this triggers, especially if Ock is being targeted by attacks a lot. Lastly we have Wallcrawler which, at the moment, is the same as flight; namely Ock doesn’t have to move short when climbing over terrain features up to size 5.

INJURED SIDE – Once injured and flipped Ock gets an extra stamina, taking him to a total of 6.

SUMMARY – Doctor Octopus strikes me as somewhat of an all-rounder. Flurry of Arms adds a little flavour by allowing additional damage on wilds, and Pierce allows a little enemy dice manipulation. Scientific Hubris is a nice way of getting some power ramp going on. Ock seems to be someone would add in to fill out a gap not covered by ther characters already. One thing to note is that he does not get the benefit of the Cabal affilition, I am assuming that there will be a spider-verse affiliation at some point in the future but that has yet to be confirmed.

With regards to team tactics cards, as Doc. Ock is such an all-rounder you could use any of them really., it all depends on what other characters you are running.

How have you found Doctor Octopus to be in your rosters? What cinematic moments have you had with him?  Comment below!