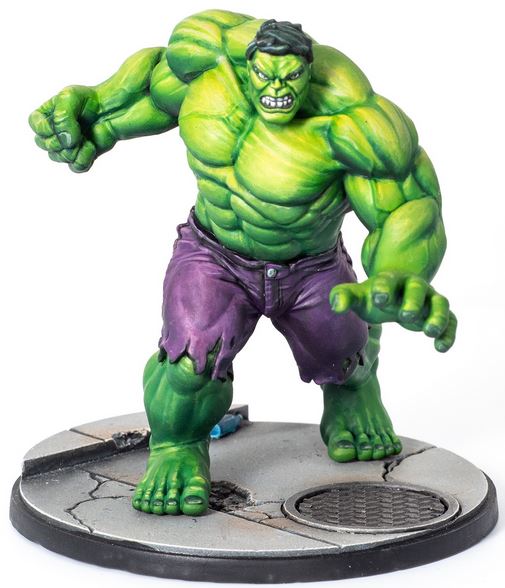 Ah yes, the big green smashing machine. One a 65mm base Hulk, along with M.O.D.O.K, is the largest mini currently in the game. He is a force of destruction, so how well has that been translated into the game? Let’s see.

STAMINA – As somewhat of a beast you would expect Hulk to have a slightly higher stamina value than the other core set characters, so what do you think – 8? 9? Not even close – try 20! Hulk has the highest stamina currently out there and will take some serious attacking before he drops.

MOVEMENT – Surprisingly Hulk can only move short. But given the abilities that we will discuss shortly, if he moved medium or long he would be way too powerful.

THREAT – At 6 Hulk is a higher threat character, but as he is 20 stamina (and also an absolute beast) this is fair enough.

DEFENCES – You would be forgiven for thinking that Hulk would be an absolute defensive monster but think about it, does he ever actually defend damage, really? No, he just keeps taking it until he drops. This has been reflected well in the game, in that Hulk rolls 2 dice for physical and energy attacks, but is slightly stronger at defending mystic attacks, rolling 3 dice against those.

ATTACKS – Hulk has 3 attacks. First up is Strike but hold on, it’s not what you think! First off, this is a range 2 attack, but you get to roll 6 dice and pay no power cost. This is a very short range attack, but strong. Hulk grab, Hulk Smash! Roll a wild and you will get to push the target character away short before dealing damage. Always a nice bonus.

Next up is the energy attack Thunder Clap which is a range 3, strength 5 attack which costs 3 power. This is a beam attack (hit all characters the range tool touches), so it can hit multiple targets which is always nice, and at strength 5 it is no slouch in the damage department. Just wait for all your opponents characters to be nicely lined up and fire this off.

Last up is the physical attack Hulk Smash! This attack is range 2, so quite short, but you get to roll a massive 8 dice! And all for the cost of 4 power. As if all the damage from 8 dice wasn’t enough, roll some wilds and you could be triggering 2 abilities. First, you would get to stagger the enemy character (its first action on its turn must be to shake this condition), then you would get to throw them short. Lovely, rob them of an action them lob them away from you to stew in their own juices!

But what about his superpowers I hear you say?!

SUPERPOWERS – First up we have the active superpower Gamma Leap. This costs 3 power but will allow Hulk to be placed within range 2 of his current location. As Hulk can only move short, if you can afford this superpower then it will net you valuable additional movement which could come in key at the right time.

Next we have the active superpower Strongest One There Is which is basically an ultimate throw. Hulk can choose a terrain feature or enemy character within range 2 that is size 4 or less and throw it medium. That is pretty much everything on the board except for big buildings. If Hulk throws a terrain feature of size 4 then that is 5 damage coming at a character, no small number to have to dodge!

Hulk’s last 3 superpowers are all innate. First is Inner Rage which states that during the power phase Hulk gets 3 power instead of 1. That is enough to afford everything we have discussed so far except Hulk Smash! If you are playing against Hulk then leaving him stunned so he can only gain 1 power at the start of each round is going to be key. Next is You Won’t Like Me When I’m Angry which states that you get to add one die to Hulk’s attack rolls for every 3 damage he has. Also, if Hulk would be flipped to his injured side he is KO’d instead. So let’s calculate – Hulk can take up to 20 damage before getting KO’d, so he will be able to net a maximum of 6 additional dice on his attack rolls. That’s 12 dice on Strike, 11 dice on Thunder Clap and an unbelievable 14 dice on Hulk Smash! Good grief! Good luck defending against that roll! Compared to this Hulk’s last superpower seems underwhelming – Immunity [poison] has no bearing on the game right now, but as poison characters are added to the character pool this will become more relevant.

INJURED SIDE – Nope, doesn’t exist! Read the card before you start complaining about misprints!

SUMMARY – Well, what can we say other than ATTACK! Hulk has multiple push/throw options, a superpower that lets him get a “free” move, a way to generate extra power and a superpower that keeps feeding him dice the more damaged (and angrier) he gets. What’s not to love?! Get him on the board and start getting some damage laid out.

Team tactics cards-wise there are a few Hulk-specific cards. Anger Management allows a non-Hulk character within range 3 of Hulk to pay up to 5 power to put that amount of damage onto Hulk, a quick way of getting Hulk souped-up and doing more damage to your opponents quickly. Gamma Launch allows Hulk to throw an allied character within range 2 a staggering distance of range 5 for a cost of 3 power. This can only be done to an allied character not holding an asset or civilian token, so this is great for early-game advantage. Get your objective-holder straight onto an objective and in good position for moving onto the next objective before your opponent has even got off the starting line.

Seeing Red isn’t Hulk-specific, but considering that Hulk would get an attack if a character within range 2 of him is dazed or KO’d, and the fact that he can attack for so much, this card is a good fit for him. Smash is also a good contender, allowing a terrain feature of size 4 or less to be destroyed and then adding a number of dice equal to the terrain features size to Hulk’s attack rolls this activation (jut in case Hulk’s additional dice aren’t quite enough for you).

There is a delicate balance to be struck between getting Hulk damaged so as to gain access to extra dice, and having so much damage on Hulk that he is easily wiped out. As such Patch Up could be a good card to include as it will allow a litle healing if things are looking bad for Hulk. Also, considering Hulk has the potential for such huge attacks he would be a good target for One-Two Punch, allowing 2 extra dice to be added to his attack pool, just in case. Hulk has short movement, and it may be that you want to get him somewhere on the board but can’t afford his Gamma Leap superpower. As such Avengers Assemble could be a good include, allowing all allied Avengers characters to move short at the cost of 1 power.

For those who see Hulk across the table, staggering and stunning him is going to be a good tactic, robbing him of an action and reducing his power uptake. As such, Second Wind could be a good card to have in hand so that the stun condition can be removed at a critical moment for the cost of 1 power. On that note, if you find yourself playing against Hulk then Trip Up would be a great card to have, aloowing you to hit him with stun and stagger all in one, as long as damage is dealt when you attack Hulk – easily done considering his low defences.

How have you found Hulk to be?  What cinematic moments have you had with him?  Comment below!