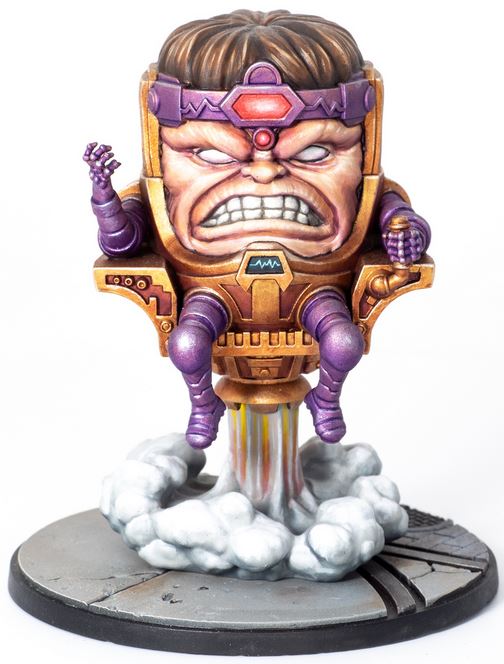 Oh George, what have you become? Yes, it is time to look closer at the head in the flying chair. What does he do? And, more importantly, does he poo?! Let’s see.

STAMINA – M.O.D.O.K (henceforth to be referred to as Mo’) has 10 stamina. That’s half a Hulk, but still a lot more than the core set characters. It will take a significant roll to one-shot him.

MOVEMENT – Just like Hulk Mo’ moves short, which is fair enough when you consider that he is a giant head in a floating chair.

SIZE – Mo’ is size 4 which makes for good visibility over terrain, but also means he can’t be thrown by any of the core set characters.

THREAT – Mo’ is 5 threat, which doesn’t seem overly high for a larger character. We will have to wait until more characters are added to the character pool to see if this is around average or not.

DEFENCES – As Mo’ is a giant fleshy target on his front side he gets to roll a measly 2 dice against any physical attacks. Come at him with energy or mystic attacks though and he is slightly better at defending, with 3 dice rolled respectively.

ATTACKS – Mo’ only has 2 attacks, but what attacks they are! First up is Psionic Blast which is a range 4, strength 6 attack with no power cost. As per standard strikes Mo’ will get to gain power equal to the damage dealt. As of now this is the only mystic attack in the game, and at range 4 and strength 6 it is very powerful, considering Mo’ can do it for free. And on top of that there is a wild ability called Sap Power which states that before damage is dealt the target character loses 1 power for each wild in the attack roll, and Mo’ gains that amount of power. Sheesh. From across the board Mo’ is rolling 6 dice for free and then stealing power on wilds. And he gets to do that twice a round if he doesn’t move. Ouch!

Mo’s next attack is called Doomsday Chair and is also a range 4 attack, but has a strength of 7 and a power cost of 3. On top of such a large dice pool the attack also has an ability called Whirling Blades which states that after the attack resolves Mo’ get to make another Doomsday Chair attack without paying the power cost. The only condition is that this second attack must target another character within range 2 of the original target character. On top of that roll a wild and you get to make the target character bleed. Wow, what an attack. If you see Mo’ across the table keep your allies far away and outside of range 2 of each other!

SUPERPOWERS – First up is the active superpower Bow to the Will of M.O.D.O.K. This has a power cost of 2 and allows Mo’ to choose an enemy character within range 3 and advance it short. What’s the benefit of this? As M.O.D.O.K only moves short why waste an action moving him towards an enemy when you could just grab them and pull them towards you, then fire off 2 attacks. The caveat is that you can only use this superpower on a character once per turn, but you can move as many characters as you like as long as you, like He-Man, have the power, and they are within range 3.

Next up is another active superpower delightfully named Imbecile! All the World is a Weapon to M.O.D.O.K! This costs 2 power and allows Mo’ to throw long a piece of terrain size 3 or less within range 3. Long is no small distance and if everyone is spread out to avoid Mo’s Doomsday Chair attack then the odds of the battlefield being open enough to hit an enemy character far away are good.

Next is a reactive superpower called Pea-Brain! M.O.D.O.K’s Genius is Infinite! This superpower has a power cost of X and states that after Mo’ rolls attack or defence dice he may spend any amount of power. For each 1 power spent Mo’ gets to reroll one of his own attack or defence dice. Dice manipulation in a dice-based game is a very powerful ability, so the chance to pay power to reroll individual dice is going to be extremely powerful, if you can afford to do so.

Last up is an innate ability called Psionic Force Field which allows Mo’ to change wild results in attack rolls against him to blanks, so good luck trying to stack conditions onto Mo’! This is a very powerful ability because there are many times where you will be relying on conditions like stun and stagger to rob opponents of actions, and it’s just not going to happen whilst Mo’ is healthy.

INJURED SIDE – There are some significant changes once Mo’ flips. First up, his stamina drops drastically from 10 to 4, making him much easier to take down. Also, he loses his innate superpower Psionic Force Field meaning he becomes much easier to hit with special conditions.

SUMMARY – What is not to love on Mo’s healthy side. Both his attacks are powerful, and the ability to throw long, drag enemy characters towards him short and blank wilds on attack rolls made against him make him formidable on the battlefield. Once flipped he becomes significantly weaker and easier to take down, but before that he will definitely be doing some damage on the battlefield.

Team tactics cards-wise there are some Mo’specific ones which we should discuss first. First we have A.I.M Lackeys which allows Mo’ to spend 3 power to let an allied character perform a free move action. Also there is Psychic Fortress which lets Mo’ spend 3 power to gain cover, and give allied characters within range 4 the same for the round. This is going to become invaluable once Mo’ flips to his weaker side and needs all the help he can get to stay alive. Recalibration Matrix is also valuable because it will allow that precious reroll when all your dice come up blank.

Considering how weak Mo’ becomes when he flips, playing Patch Up once his damage is stacking up could keep his stronger side in play for longer. Smash will allow nearby terrain to be destroyed to add dice to Mo’s attack pool for the round. Disarm can be played to reduce the amount of attack dice coming in against Mo’ from a specific character, especially if they are souped up with power and looking like a threat. Also, Follow Me could be played by another character to get Mo’ another activation so he can fire off some more attacks. Inspiring Monologue (wahey) will let Mo’ reroll some defence dice which could be what you need at a critical moment. And lastly, if you are running the Cabal affiliation, Cosmic Invigoration will also allow Mo’ a reactivation so that he can continue with his damage spree.

How have you found M.O.D.O.K to be?  What cinematic moments have you had with him?  Comment below!