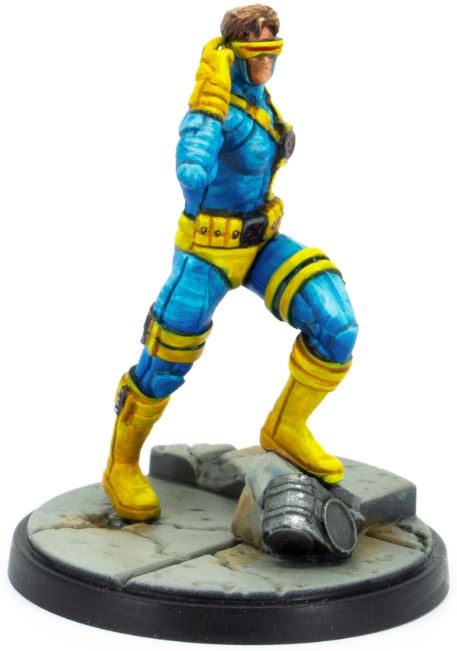 At long last we have made it to the mutants, and where better to start than the mono-ocular target of sibilant alliteration, the X-Men field team leader – Cyclops. What does the great visor’d one have to offer? Let’s see…

STAMINA – With 6 stamina on his healthy side, Scott is no slouch in the health department.

THREAT – Scott is 4 threat, meaning he should be doing a decent bit of work for us when fielded.

DEFENCES – Cyclops has a slight above average 4 physical defence, but 3’s for energy and mystic respectively.

ATTACKS – Scott has 2 attacks, both of which are energy. The first is called Optic Blast and has a range of 4, strength of 5 and power cost of 0. As usual, after the attack is resolved Scott will gain power equal to the damage dealt. And, roll a wild and you can Push the target character away short if it is size 2 or less, before damage is dealt. This is a really nice basic attack – good range and strength, and the wild push before damage dealt is a nice bonus to have. No quibbles here!

Cyclops’ second energy attack is called Optic Devastation, and has a range of B5, strength of 7 and power cost of 4. On a wild roll you can trigger Concussive Force which states that after each attack is resolved the target character loses 1 power. This is a pretty mega attack, a beam attack is always fun to pull off, and having one at range 5 is great (our only other one if I recall correctly is Iron Man’s Unibeam), especially with a strength of 7! Remember, each target character is hit by a separate attack when undertaking a beam attack, so you would need a wild on each attack roll to trigger Concussive Force. Still, I LOVE attacks that let you remove power from the target character (all hail Ghost Rider) – every little helps!

LEADERSHIP ABILITY – Cyclops bears our first mutant affiliation and it is called X-Men Blue and is for the Uncanny X-Men affiliation. This leadership ability states that once per turn, when an allied character declares an attack action but before it chooses an attack to use, any number of allied characters within range 3 of the attacking character may spend 1 power. For each 1 power spent this way, reduce the power cost o the attack character’s attacks by 1, to a minimum of , for this attack action. Which is a long-winded ‘rules-y’ way of saying allied characters can contribute to the power cost of an attack. This is a really interesting leadership ability and I am looking forward to exploring it more. The major restriction is that in order for allied characters to be able to contribute towards the power cost of an attack they must be within range 3 of the attacking character. But, this could be planned around, either by splitting groups of allied characters up across different sides of the board, or by playing specific objectives that cluster your characters together. This has the potential for some early turn big attacks, as well as helping out with shifting power off characters who have a tendency to be sat on power reserves with nothing to spend it on. Imagine using your lower threat characters to fuel Ghost Rider’s Penance Stare, Vision’s Synthezoid Avenger, Hulk’s Hulk Smash! and yes, Cyclops’ Optic Devastation. Finger lickin’ good!

SUPERPOWERS – Cyclops’ first superpower is active, is called Field Leader and costs 3 power to use. Cyclops may use this superpower to choose another allied character within range 4 and advance it short. There are ways to move longer for cheaper using team tactics cards such as Tactical Analysis, but having this superpower does mean that you may not necessarily need to have those cards in your roster anymore, freeing up space for other cards (Battle Lust for example!). his seems pretty costly, but in a pinch it could get you out of hot water. Note that a character can be advanced y the superpower only once per turn, so you can trigger it as many times as you like (or can afford), as long as you only move an allied character once.

Next up is another active superpower, this time called Hit and Run, which costs 2 power. As an action Cyclops may made an attack action followed by a move action once per turn. We have seen this Charge on quite a few characters now, and it is always welcome sight. This will be great for lining up a nice Optic Blast which will hopeflly generate a bit of power for a follow up Optic Devastation.

Last up we have a reactive superpower called Quick Draw which costs 2 power. This superpower states that when Cyclops is targeted by an attacker and the attacker is outside of range 2, instead of rolling dice equal to his defence Cyclops rolls 5 dice. Then, if Cyclops suffers no damage from the attack, after the attack is resolved the attacker suffers 2 damage. Like Hit and Run we have seen this on other character before. I know opinion is divided on these types of abilities in the community, but personally I like them. It is a bit of a gamble but in all honesty I have had it pay off quite a few times, so seeing it here on Cyclops is nice.

INJURED SIDE – No change at all.

SUMMARY – I like what I am seeing on Cyclops’s card. All his abilities are nice and straightforward, and I am looking forward to getting to grips with how he plays on the table. Lining up and firing off that Optic Devastation is going to be glorious!

AFFILIATIONS – Cyclops’ only officially listed affiliation is Uncanny X-Men, which includes his own leadership and that of his teammate Storm (but we haven’t covered that o this blog yet – but basically Storm lets you move allied characters around and grants them cover if certain conditions are met). Obviously Cyclops works in his own affiliation, so I don’t think there is a need to go into any more detail on this.

I think Cyclops would get a good benefit from the superpower discount provided by the Avengers leadership ability, but really I guess you are running Cyclops for his beam attack, so you may as well just run an allied Vision instead. Still, worth a try out I think.

A Cabal affiliation would gain Cyclops some additional power from his Optic Devastation which he could use to fuel more attacks and superpowers. If you are a thematic player this might hurt your soul though so maybe steer clear! Still, you’ve got to consider Cabal when you’re looking at a beam attack.

A Defenders affiliation is good for pretty much everyone, but being able to switch Cyclops’ Optic Devastation to a physical or mystic attack and then dole out the Hex special condition which helps the rest of the team when attacking that character is pretty amazing.

TEAM TACTICS CARDS – As an Uncanny X-Men character Cyclops has access to all the juicy new X-Men cards. First up we have Children of the Atom which any Uncanny X-Men character can play. This card simply states that the character removes all special conditions from itself, and gains 1 power for each special condition removed in this way. This seems like a really great card – so many characters now throw out special conditions. It seems more likely than not that over the course of any game you will be able to play this card. Look at it this way – would you play a team tactics card that just said “immediately gain 1 power? Or 2? 3? I can’t really see myself not ever taking this card in an Uncanny X-Men team.

Next up we have First Class which can be played by an allied Uncanny X-Men character at the start of the Activation Phase. Once played, each allied Uncanny X-Men character does not have to spend power the first time they interact with an objective this round. Again, another really great card, perfect for those turn 1 plays where you don’t have much power but you are within reach of a few objectives. You can wander over to an extract objective, pick it up for free, and then saunter on over to squat on a secure. Lovely stuff! Especially nice for when trying to find that pesky Kree power core. Bear in mind this is restricted to only allied Uncanny X-Men characters, so any allied but unaffiliated characters on your squad won’t be able to make sue of this.

We also have To Me, My X-Men which can only be played by an Uncanny X-Men character with a leadership ability (so currently Cyclops and Storm). This character may spend any number of power to play this card. Then, for each power spent 1 allied Uncanny X-Men character may advance short towards the leader. This is very reminiscent of Avengers Assemble, but is flipped a bit in that only 1 character is paying for everyone to move. Still, very handy to have in a pinch, and could get you some serious points if used to play the objectives.

As for unaffiliated cards, a few spring to mind. All You’ve Got on a powered up Cyclops could be fund – spend an activation doing some damage to build up power, then use the second activation granted by this card to throw out a big Optic Devastation attack and decimate the enemy forces. Ideally Cyclops would be pretty damaged already, then he would just get dazed without too much loss to yourself. This would require some really specific board state conditions to be met, but we can dream can’t we?

Battle Lust could also be fun – move, play the card for 2 power, then do a 9 dice Optic Devastation and (hopefully) push the target character away short. Mmmmmm, delicious. Speaking of adding dice, any of the other dice adding cards like Heavy Firepower and One-Two Punch would work nicely with Cyclops’ attacks.

As Cyclops’ leadership ability revolves around allied characters being within range 3, you might consider a card like Extreme Conditioning which, for 2 power, would let Cyclops move long instead of medium. This means that should your game plan be going awry, you could reposition Cyclops so that (hopefully) you can use his leadership ability a bit more effectively.

Lastly, If you would like an early big beam attack you could consider No Matter the Cost, which would allow you to damage Cyclops for an equivalent reduction in the cost of an attack. Taking 3 damage to pay 1 power for an Optic Devastation sound good to you?

And that’s your lot! If you’re based in the UK and thinking of getting the next lot of releases (which I believe is Angela & Enchantress and She-Hulk) you may want to consider giving Blackgate Games a try. They stock all MCP products at a great discount, but don’t hold it against them that they also sell Star Wars stuff.