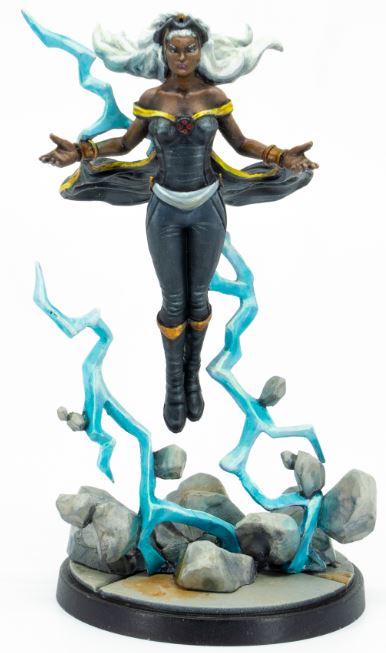 It’s time to take a look at the Uncanny X-Men’s second affiliation leader, and on/off wife of T’Challa, the Black Panther – Storm. What does Ororo bring to the table? Let’s see…

THREAT – 3. I do enjoy a 3 threat affiliation leader you know.

DEFENCES – For a 3 threat character Storm has better than expected defences, with 3 for physical an mystic and 4 for energy. I like that.

ATTACKS – Storms first attack is an energy attack called Lightning Bolt which has a range of 4, strength of 4 and power cost of 0. After the attack resolves Storm gains power equal to the damage dealt, and roll a wild an you get to give the target character the Shock special condition (they remove 1 die from heir attack rolls). Shock definitely does some work when you can get it out, so that is nice to see; still, 4 strength attacks are pretty weak, and the odds of you rolling a wild on 4 dice aren’t great really. Still, range 4 is good and who knows, you may get lucky with you roll.

Next up we have a physical attack called Ice Blizzard which has a range of B3, strength of 4 and power cost of 0. If this attack deals damage, after the attack is resolved the target character gains the Stun special condition (when they would gain power gain only 1 power instead). Now this I like because the Stun is automatically applied and you can hit multiple targets with it. It is still only strength 4, but considering you get to do all this for free I think it is fair enough.

Last up we have a physical attack called Hurricane which has a range of A2, strength of 5 and power cost of 4. Seems expensive, even for an area attack which are rare in this game. But harken, there is more! This attack ignores line of sight, and the defending character does not benefit from cover. So, you can hit them anywhere. After all the attacks are resolved each enemy character with the Flight innate superpower targeted by this attack suffers 1 damage. And, allied characters in range of this attack do not suffer damage from it. The denial of LOS and cover alone makes this a good attack, but adding in the extra hate for flyers (which I imagine most people run at least 1 of) and protection for your allies tips this over the edge. The only downside is that it costs 4 power for a 5 strength attack which, on other characters, you can do for free. Still, there are ways of boosting the amount of attack dice and considering this is an area attack I don’t think we can reasonably expect all of this rules text as well as 6 or 7 dice. It will be interesting to see how useful this attacks ends up being over the course of a few games.

HOLY RESURRECTING CROSSBONES BATMAN! This is undoubtedly a really powerful leadership ability. Out of turn movement, even only once per round, can really help you recover from a bad board state, or improve your position. Even if a game lasts only 3 or 4 rounds, that’s 1.5 to 2 activations worth of movement you have gotten, all for free. This is going to be great for getting slower characters into position quicker.

And as regards to the second part of the ability, there is no doubt that over saves lives, so having free cover when being attacked outside of range 2? Heck yes, i’ll take it.

SUPERPOWERS – Ororo’s first superpower is active and is called Eye of the Storm. This superpower costs 3 power to use and states that during the next attack action made by Storm this turn she gets to add 2 dice to her attack rolls. Talk about making Hurricane even better! 7 power for a 7 dice A2 attack which ignores LOS and cover, does extra damage to flyers and does no damage to allies? Dang! Using this superpower to boost Lightning Bolt to a 6 strength attack will increase your odds of doing damage and getting the wild for Shock, and making Ice Blizzard a B3 6 strength attack with automatic Stun is no slouch either. This is undoubtedly a really useful superpower – I wouldn’t like to be sat across the table from it, especially if it cost less than 3!

Next is another active superpower, this time called Tempest. This superpower costs 3 power to use and states that Storm may choose a terrain feature or enemy character of size 2 or less and within range 3 and throw it short once per turn. This isn’t the greatest throw in the world, but 1 throw is better than 0 throws. Range 3 is a decent enough range, so this throw is certainly usable if you can afford it.

Last of all we have 2 innate superpowers. First, Goddess of Storms states that characters must be within range 3 to target Storm with attacks. Second, Storm has Flight and Immunity [Shock]. Protection from attacks outside of range 3 is pretty bonkers. Hawkeye won’t be able to throw conditions onto Storm without getting close, and Rocket can forget about his long range missiles. Even characters with shorter range like Star-Lord will have to get in closer to do any attacks – fantastic. Flight is great for navigating the board, and being immune to Shock means that Storm’s attack dice won’t be getting reduced anytime soon.

SUMMARY – I mean, wow. For a 3 threat character Storm brings a heck of a lot to the table. She seems quite hardy with her slightly above average defences and protection from attacks outside of range 3. Both aspects of her leadership ability are pretty bonkers, and her attacks are decent, even great with dice added. There is very little here not to like.

AFFILIATIONS – As a listed Uncanny X-Person Storm benefits from her own leadership ability, as well the X-Men Blue ability of Cyclops, and I think both work well with her – Gold allows her to move around the board a bit more as her only movement would be in-activation, and also gives her cover from attacks outside of range 2; and Blue allows other character to contribute power towards her attacks, meaning she can save her power to pay for Eye of the Storm to add dice to those attacks. Both abilities are very nice with Storm.

Storm is also listed as a Wakandan for she was, after all, married to T’Challa. Re-rolls on her attacks will be nice, and will help her defences out a bit too. All fairly straightforward, but nice to have access to.

Beyond a Wakandan or X-filiation it is hard to talk about area and beam attacks without giving Cabal some serious consideration. Especially so in this case as Storm has 1 of each. That’s a lot of potential for additional power generation, which means a lot of additional dice on attacks and a lot more throwing.

I think Storm could help the Black Order out a bit, if you can find a way to fit her in of course. Her attacks have the potential to hit a lot of people and do damage, which he other team members could build upon to get the K.O’s they so very much desire.

Defenders is great on everyone, but tailoring an area/beam attack to the target characters weakest defence is pretty mega, as is giving out the Hex special condition (no exploding criticals), and something worth considering with Storm I think.

As Storm has so much target potential, she could be good in a Guardians of the Galaxy team, as she will have no shortage of opportunities to use the rerolls granted by the Winging It tokens. Heck, she could use them all in a single beam attack if she had enough targets.

TEAM TACTICS CARDS – As an Uncanny X-Men character Storm has access to all the juicy new X-Men cards. First up we have Children of the Atom which any Uncanny X-Men character can play. This card simply states that the character removes all special conditions from itself, and gains 1 power for each special condition removed in this way. This seems like a really great card – so many characters now throw out special conditions. It seems more likely than not that over the course of any game you will be able to play this card. Look at it this way – would you play a team tactics card that just said “immediately gain 1 power? Or 2? 3? I can’t really see myself not ever taking this card in an Uncanny X-Men team.

Next up we have First Class which can be played by an allied Uncanny X-Men character at the start of the Activation Phase. Once played, each allied Uncanny X-Men character does not have to spend power the first time they interact with an objective this round. Again, another really great card, perfect for those turn 1 plays where you don’t have much power but you are within reach of a few objectives. You can wander over to an extract objective, pick it up for free, and then saunter on over to squat on a secure. Lovely stuff! Especially nice for when trying to find that pesky Kree power core. Bear in mind this is restricted to only allied Uncanny X-Men characters, so any allied but unaffiliated characters on your squad won’t be able to make sue of this.

We also have To Me, My X-Men which can only be played by an Uncanny X-Men character with a leadership ability (so currently Storm or Cyclops). This character may spend any number of power to play this card. Then, for each power spent 1 allied Uncanny X-Men character may advance short towards the leader. This is very reminiscent of Avengers Assemble, but is flipped a bit in that only 1 character is paying for everyone to move. Still, very handy to have in a pinch, and could get you some serious points if used to play the objectives.

If you end up running Storm in a Cabal team you may want to consider also running Advanced R&D. As she will likely be a bit of a power bank from all those area and beam attacks, you can use this card to shift some excess power from her and onto your other characters.

All You’ve Got could be a good card too, if you wanted to double down on activations with Storm and then daze her, or K.O her if you want to engage blaze of glory mode. 2 activations is a lot of attacks.

We have to consider the perennial favourite of Inspiring Monologue – Battle Lust. You know what it does by now – move Storm, pay 2 power, add 2 dice to her next attack, deal damage, push the target character away short.

Lastly, as mentioned before, adding dice to Storm’s area and beam attacks will be very tasty indeed, so card like One-Two Punch and Heavy Firepower are well worthy of consideration.

And that’s your it! If you’re based in the UK and thinking of getting the next lot of releases (which I believe is Angela & Enchantress and She-Hulk) you may want to consider giving Blackgate Games a try. They stock all MCP products at a great discount, but don’t hold it against them that they also sell Star Wars stuff.

A Glossary of MCP Slang

The Big Conversation: the Meta and You

I’m playing X-Men, but not always…