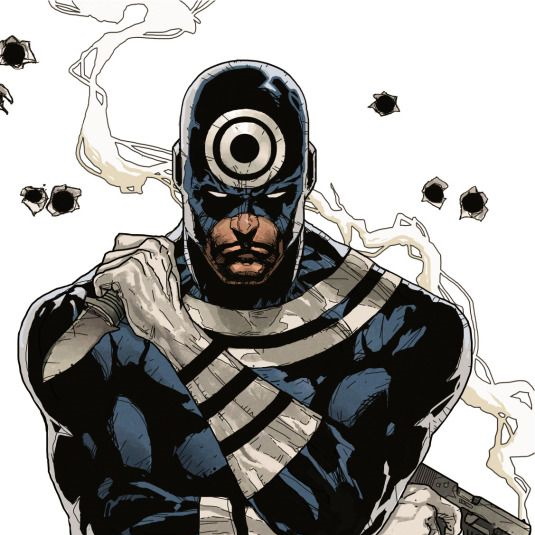 Welcome to a new article initiative we’re trying out on Thursdays here: Rehabilitation Clinic. Each week we will take an underutilized and under-loved character or tactic or crisis, explore what makes them so lackluster, and how to rehabilitate them to make them really shine. In our recent Tier List series, Bullseye has been drawing a lot of hate as evidenced by his F ranking in Cabal and D ranking in Criminal Syndicate. So, it only seems fitting that he be the inaugural character to visit us here at the Rehabilitation Clinic!

Benjamin Pointdexter to the undiscerning eye looks like an inoffensive 3 threat character at his core. 10 stamina across both sides, medium move, size 2, 3s across the board for defenses. So good so far, right? Well, then we get into his attacks.

First off his builder is terrible (for those of you new to MCP, builder is common slang for your 0 cost attack that builds up your power, either with damage/power or giving you a flat 1 power every time you attack). If I was in charge of MCP’s design it would be literally illegal to make a 4 dice attack that generates power equal to damage dealt. So many of Bullseye’s problems would be fixed by making Throwing Knife a 5 dice attack or generating a flat 1 power. But as it stands he rarely ever does damage and as a result never has power for his superpowers or big spender attack. And even if for the sake of argument he spikes on his basic attack, what can he do when flush with power?

Hit and Run is nice to consistently hold a back-line objective while being relevant, and Parting Shot makes it hard for melee focused characters to run him down and take him out, but Hawkeye arguably does both those things but with a better builder attack. I Never Miss costing power AND not counting as the attack doing the damage creates an amount of anti-synergy that takes him out of consideration as a Cabal piece. And finally, we come to Pin Cushion, his spender. For 4 power you get the same amount of output as Mystique’s builder if she was holding a Hammer, or alongside Lockjaw. Sure it gives out bleed but I’d rather the 2 bonus power Mystique would generate (and not spending 4 power on the attack in the first place!).

All in all Bullseye is a reverse jack-of-all-trades, somehow average to below average at damage, utility, tankiness, and mobility. If you want a back objective holder who can poke, Hawkeye probably does the same job better. So with all those condemnations, how do we make poor Benjamin work?

The obvious next step is to look at where he’s affiliated. Currently, that’s Cabal and Criminal Syndicate. He doesn’t do well in Cabal because Cabal is already backline heavy with Red Skull and M.O.D.O.K. in addition to being incredibly bad at taking advantage of their leadership (if I Never Miss worked with Cabal Leadership he would definitely see play). So, we have to look at Criminal Syndicate. Syndicate is arguably the best turd polisher affiliation in the game because they turn anyone into a scenario monster, counting as double while healthy.

That means a backline objective holder needs to be met with 2 of your opponents characters to nullify, 3 to outscore a point if they can’t push/daze them. And standing on a back point where nobody has to rely on your damage output is a place where Bullseye can shine. Criminal Syndicate is mostly frontline beaters, with Kingpin, Crossbones, and Taskmaster leading the charge. That leaves an opening for someone to stay home and guard the fort. A lot of time CS will play an E/C force – some combination of Gamma, Demons Downtown, Witnesses, and Terrigen cloud, and that usually means M.O.D.O.K. is your prime back objective holder, and you wouldn’t need a second. But its also possible to play to D/B, or just want coverage into those as M.O.D.O.K. doesn’t like those secure shapes.

So, what does a Bullseye team look like? Let’s say for simplicity’s sake you’re playing 17 threat, so Riots Spark Over Extremis 3.0 with Fear Grips World as “Worthy” Terrorize Cities

You’re going to start with Kingpin and Taskmaster as your juicy affiliated picks because in this version you’re skipping M.O.D.O.K. We add Bullseye and then here’s where things get interesting. We have 7 threat left to fill and we’ve fully obligated our affiliation requirements as long as we aren’t playing 6 wide. That opens up the ENTIRE GAME of combinations – Black Dwarf + Valkyrie, Strange + Okoye, Corvus + Proxima are all exciting pairs you can slot in. From there you can easily play a 2-1-2 split where Kingpin/Taskmaster take one flank, your 7 threat of whatever takes the other flank, and Bullseye gets to sit on the home objective scoring you 2 VP every round assuming he got the hammer (and he can actually kinda do damage finally if you did). He’ll never be the shiniest piece, but he has a job that he can do reasonably well, and pave the way for whatever unaffiliated stars you want to fit in there.

That’s going to wrap us up for the inaugural episode of Rehabilitation Clinic! Let me know in the comments wherever you see this posted who you want to see next!