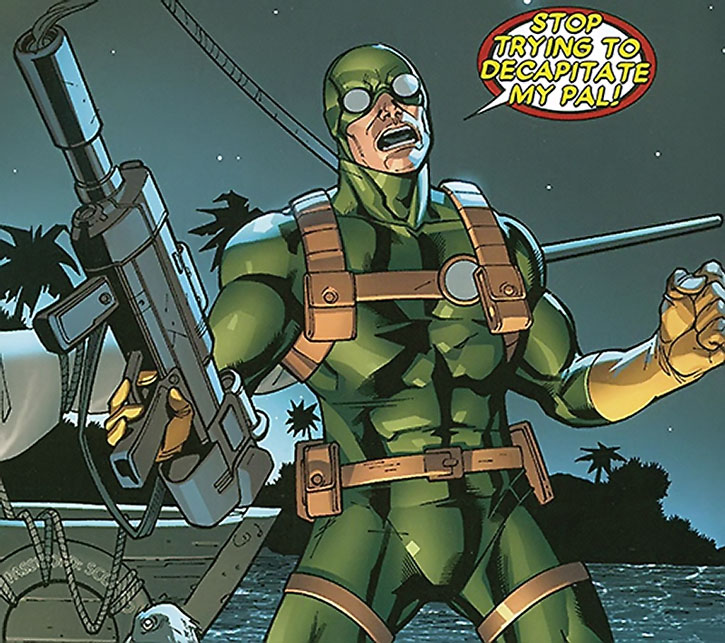 We already knew Hydra Bob was going to be a doozy from the panel 2 play previews they put out but man! This is just something else.

Starting at the top of the card, we have some pretty below average stats, but not out of the realm of reasonable with his 2 threat. Three stamina, medium move, size 2, and 2s all around for defenses. That puts him in a very precarious position much like Rocket. But does his attacks and superpowers match up?

First we have the unexciting hydra pistol, an inoffensively acceptable basic attack on a 2 threat character, roughly on par with dedicated support characters attacks like Wong and Lockjaw, but with better range. Nothing to write home about, but then we get to the big kahuna – Excessive Violence. Let me just say, wow. 9 dice physical at range 4, 2 flat damage to everyone nearby, and it literally can’t NOT kill Hydra Bob. This entire card is an exercise in “how much of a character’s power budget can we put into a single attack?” and I love it.

Pairing him with Shuri or a source of rerolls is going to result in a lot of characters getting one shot, essentially trading Bob’s healthy side for theirs. And if they’re 3 or 4 threat that’s going to be an absolute steal. Bonus points if you pull this off on an E shape secure and really get to make the most of the splash damage effect.

But, as cool as the attack is, we should go over the rest of his card quickly. His first superpower is one he shares with the Winter Soldier, Hydra Tactics. Not the most important superpower as he’s a bazooka on a stick, but if it helps you reposition to double tap with your Pistol or just get back onto a point after yeeting yourself off by shooting the bazooka, it seems half decent.

Next is the dream factory, “Make it Spicy Bro” – for 8 power you get to shoot the bazooka AGAIN. The downside is you are very probably only pulling this off once a game, you’ll be lucky to do it twice if it goes long, and if you manage to record a game where you get it off 3 times I will paypal the first person to do so (without obvious collusion with your opponent) 20 bucks. I am confident that by the time someone pulls this off they will have forgotten about my bounty because its just that hard to do.

Muy Caliente doesn’t deserve much discussion as it just sets you up to start strong with the Bazooka, but there is a much more interesting passive on his backside. But HOW!? makes it so Hydra Bob can never die as long as he hasn’t activated before going down. No matter how many times you beat him down on his injured side he’ll ALWAYS get up (with some proper activation order). To mitigate how broken this effect is, there are two caveats: a) you lose 3 power each time you “resurrect” this way meaning you can’t farm damage for power, and b) if he’s ever the last person left on his injured side, you automatically lose as you’ve functionally been tabled.

So where does this leave Bob? Personally I’m thinking Cabal. Bonus power from attacks if you’re lucky enough to damage means more bazooka-ing (yes, this is now a word), access to Zemo rerolls, and Red Skull loves someone he can Hail Hydra infinitely. The other likely candidate to me is surprisingly A-Force. Put a bunch of big beefy ladies like She-Hulk, Angela, and Okoye on the midline while Bob lurks in the back, and if any of the frontline characters are attacked, funnel the power into Bob for more Bazooka shenanigans. Inhumans is a distant third place home for Bob here, with Blackagar Boltagon (seriously who came up with this name?) and company feeding bob a power each turn to get him back to Bazooka time regardless of whether your opponent hits your team or not.

If you’re interested in talking the tactics cards that come in the box, I already covered them in my Deadpool First Impressions here:

None of them are Bob-Specific (unless you count Deadpool stealing his Loaded tokens) so there aren’t really any specific synergies to cover with the tactics cards.

All in all I’m pretty whelmed by Hydra Bob. It’s unclear to me whether he’ll be top tier competitive as dazing yourself is a bit of a no-no unless you can guarantee dazing someone in return. Perhaps theres a use-case to the aggressive frontloading of power, one shotting a Hired Muscle Loki sounds very attractive, though I’ll have to wait to see what Xavier Protocols says on the math. And whether he’s good or not he is an incredibly fascinating piece people will be looking to break for months to come.

Finally, if you’re looking to pick up this dynamic addition to the game may I recommend our fine sponsors: