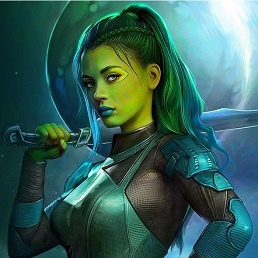 Welcome back to the Rehabilitation Clinic! Here, we rehabilitate unloved and underutilized characters, and try and give them a new lease on life. This week we’re covering the Cosmic Assassin herself, Gamora.

How is Gamora in MCP, you might ask? The answer is not great. While she has one of the higher damage outputs in the game for her threat level, she’s struggled due to her low defensive stats and poor power generation. In essence she’s a glass cannon – to players who are not experienced in triage she’s a weed whacker, to people who know how to prioritize targets she’s a gnat on their windshield. Combine with Guardians’ tendency to not have priority and it paints a pretty clear picture on how Gamora gets left behind a lot. But fear not, for here at the Rehabilitation Clinic we specialize in making characters shine!

Next we move on to her offensive capabilities. God Slayer is a builder worthy of a 5 threat character, especially with Deadliest Woman in the Galaxy. Cosmic Assassin is an absolute awful beating to lay down when you wake up from being dazed with a bunch of goons on your secure. Assassin Leap is a key mobility tool that can also help stretch her damage output – both by collision damage, and by allowing you to attack twice when otherwise you’d only attack once. BUT, getting power is trickier than you’d expect. Or at least, getting power before she gets dazed is. Here’s some facts to consider about her damage output:

If we put these lists of problems together, it paints the picture of a character that really wants you to invest power into them (specifically early), maybe support them with mobility / rerolls so you can have a flashy alpha strike followed by a final blaze of glory when your opponent gets their revenge. She likes priority as well to ensure that when she’s injured she gets to open a can of whupass. To me, there’s one very obvious place to do this: A-Force.

Defenders of Arcadia, the A-Force leadership allows you to funnel power into characters, even as early as round 1. Especially if you Special Delivery Angela and She-Hulk into the middle of the board, your opponent is likely to try something to deal with them. Once Gamora gets her second power she can either threaten past the midline with a pounce, or double move to an enemy secure with Martial Prowess.

A-Force comes with three great affiliated cards, two of which can help make Gamora tougher and limit push/throws to keep her at arms length.

And if that wasn’t enough, the affiliation has two bodyguards – She-Hulk and Okoye, one or both of which are played in most A-Force games.

As for the crisis we’re going to look for here? Gamma Wave Sweeps Across Midwest

While Gamora’s mobility can be put to good use on D/B maps, threatening to pounce and long move from point to point after she’s cleared things out, an E map creates a vertical column and also punishes opponents from straying too far from it, creating a perfect killbox for Gamora to get up close and personal (and makes it more likely Martial Prowess comes into play). It’s also traditionally the stomping grounds of the most aggressive strategies in the game which fits well with her aggressive style. For the hypothetical, let’s say your opponent responds with the classic Fear Grips World as “Worthy” Terrorize Cities.

To make her shine, the team will be as follows (at 15, assuming you had priority and chose the threat yourself):

With the following tactics:

With this setup you have the nasty opener of a Special Delivery putting She-Hulk and Crystal on the middle, with She-Hulk threatening their home shelter if they do not respond sufficiently. Crystal and Okoye can spend round 2 switching places on home/middle, or Crystal can move out of the center to grab a side hammer if things are stable in the middle.

Gamora can flank for a hammer if she desires, promising to return to the action round 2 with some extra power for a pounce. Or, alternatively, if fighting an attrition heavy team that could feasibly fight you for the center round 1, hold her to the middle to threaten a pounce + attack if anyone hits Crystal or She-Hulk. Once you establish control of the center with She-Hulk bodyguarding for Gamora and funneling her power, Gamora can go early in rounds with priority to pounce+strike+strike someone down while She-Hulk goes late to throw someone too hard to daze off a shelter. If you have a cluster of She-Hulk, Crystal, and Gamora in the middle you can play A-Force Assemble round 2 to buff all their defenses by two dice as well, making Martial Prowess an even tougher nut to crack. Or finally, if you want to get fancy, you can hold Gamora to threaten to double move and pounce onto their shelter late in the round which might catch players off guard when doing secure math.

Of course I’m going to preface this with there’s a lot of more impactful 4s I could see in the same role, but I think this is a pretty good setup if you want to make Gamora shine. She has relevance round 1 that she normally doesn’t. The tactics and abundance of bodyguards do a good job of keeping her alive, and the leadership will ensure she has enough power in the midgame to go all out. If you want to jam Gamora on the table and make her feel as impactful as possible, you could do a fair bit worse than this setup.

That’s going to wrap us up for this episode of Rehabilitation Clinic! Let me know in the comments wherever you see this posted who you want to see next!