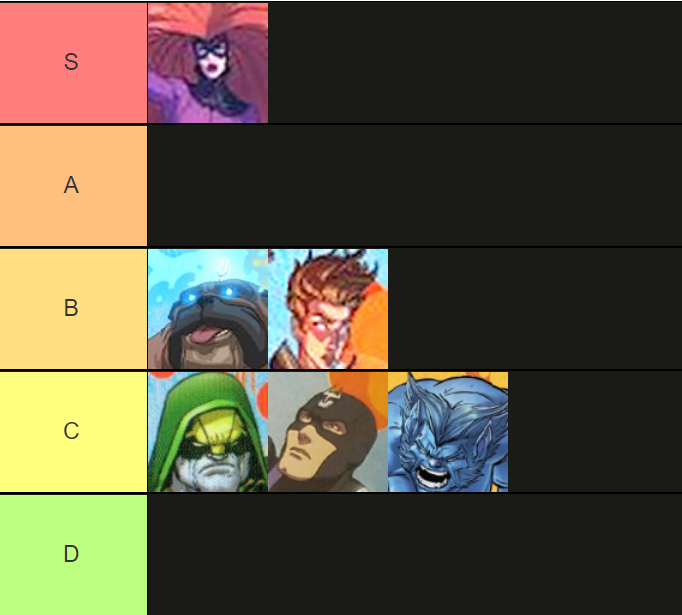 Another Tuesday, another tier list. This week we’re covering everyone’s favorite totally-not-mutants: Inhumans! I’ve played as and against them a few times in the past weeks and boy are they a fascinating bunch. A giant teleporting dog, some lady with a bad hair day, a glorified mime and the avatar

alongside the interesting inclusions of Beast and Ronan to round things out. For those of you new to this tier list series here are the ranking criteria:

– All rankings are based on playing these characters in the given affiliation. They might shine elsewhere but we’re focusing on in the context of Inhumans rosters here (although splash options for roster building will be taken into account)
– Leadership abilities are not factored in to a leader’s evaluation unless a faction has multiple leaders
– Gems won’t be ranked on their own merits they’ll be folded into their affiliated user’s ranking (obviously excluding Black Order).

Medusa – S – The rules text on Medusalith Amaquelin-Boltagon is almost as ridiculously long as her name, and virtually all of it is incredibly good. Her builder is in the conversation for best builder in the game, she has a character throw, and Royal Decree has been used to deadly effect in TTS League Season 4 top cut. In fact, one of the finalists won their semi-final match by playing a point down so they could play Medusa/Lockjaw in their Wakanda team. I cannot recommend her highly enough. She’s going to be a meta splash in the same big way that Enchantress has been, making the competition tougher in the 4 cost slot for Wakanda, Web Warriors, Criminal Syndicate, and any control oriented teams. She’s even in A-Force (alongside Crystal) to help bridge you to a dual affiliation, but be careful as I forsee both affiliations wanting to bring multiple tactics cards. Expect her to be the absolute star of the show in any Inhumans rosters you put together.

Lockjaw – B – I know what people are going to say, “But Roster Doctor, you said Travis played a point down for Medusa and Lockjaw!”. Yes, but that is with the asterisk that Lockjaw is a situational all star. If you follow the MCP podsphere (and if you’re on this site, you probably do) you know there are wildly varying opinions on Lockjaw. Is he broken? Is he worthless after ~round 2? Depends on the crisis combination and the matchup. I’ve seen Lockjaw look like an absolute house on D and B secures where he helps keep Medusa or another ally stick to your opponents side of the board while still holding a point (and some interdimensional bloodhounds and throws for good measure). In some of the more attrition focused E matchups I’ve seen him give some impressive center threat round 1, but after that he doesn’t shine unless your opponent manages to let him go last and teleport some buddies onto the enemy gamma shelter in a pinch. He can do some amazing things but make sure he’s the right tool for the job otherwise you’ll be left underwhelmed.

Crystal – B – Another situational star, I’ve managed to be WAY more wowed with her the more I see her on the table. Being a long mover gives a lot of opening mobility, and while her attacks are kinda lackluster on their face her rerolls can pack a surprising punch (especially if she starts by applying incinerate). I also LOVE the synergy of her kit with the Inhumans leadership, with some help from allies she can always afford an extra attack between the power/round, power from 2 attacks, and the leadership. The downside is she can definitely feel pillowfisted when put up against characters with above average defenses, so pick her matchups clearly. Also to talk up the A-force splash opportunity I think she’s an amazing Special Delivery enabler, able to sub in for Angela in a pinch if she’s warming the bench or if you want to split your heavy hitters up.

Ronan – C – I want to like Ronan more than I do here. He’s a really cool tanky ball of “Don’t ever talk to me or my son ever again” with Judgment and The Accuser. I’ve just found that with or without the gem he’s just kinda… okay. I’m happy upgrading Crystal into him if I’m playing 16, or tacking him on as a 5th at 19. But a lot of the time on D/B secures I find him parked on a point either doing nothing or occasionally plinking people in his vicinity. On more compact E or Split C boards where there’s likely to be a good scrum he definitely gets closer to my expectations but not quite there. Power Gem Ronan often feels overcosted but I wonder if round 1 Terrigenesis is a strong enough counter to Dashgard Loki openers to merit seeing it more. As for his Guardians status, I don’t feel like he’s a helpful lynchpin when he’s only conditionally good in both affiliations.

Black Bolt – C – I’m just going to come out and say it – Blackagar Boltagon is the stupidest name in comics. Somebody got PAID to come up with a name that bad, and thats not ok.

But, for the sake of this article, I’m going to put aside my personal feelings about his name when rating him. Which, unfortunately still means he can’t get past a C. The more I’ve seen of him on the table the less I’ve been wowed. His power economy is surprisingly bad early, especially when it feels like he’s often the sacrificial lamb power-wise when giving out power with the leadership in early rounds to get Medusa going. He also feels a bit pillow fisted if he has to move->attack, which means he often needs Medusa/Lockjaw placements to get him going which due to needing to activate him later makes his big plays incredibly telegraphed. That said, if you can deliver him to your opponents he can do some really nasty damage which can balance out Lockjaw’s low contribution and Crystal’s pillow-fistedness. I just wish he was a bit more self sufficient on more spread scenarios I guess.

Beast – C – Personally I hate Beast. To me, its unconscionable to have a builder with a mandatory place effect on a random wild trigger. And outside of throws and some solid defenses he doesn’t bring much to the table. His ability to generate power from skulls in rolls makes him a nice power battery for the Leadership, as after a point he really doesn’t value power with an (in my opinion) poor ultimate. Beast does draw you into X-Men, which to me feels like a strange splash. Perhaps Lockjaw plus Wolverine is an exciting enough combination on either side of the X-Men/Inhumans mash-up to encourage slotting Beast in but still chalk me up as a Beast hater.

That’s going to be it for this week’s tier list! Let me know in the comments what pieces you think I overrated or which pieces I’m sleeping on. If you want to make your own Inhumans tier list you can make it here: