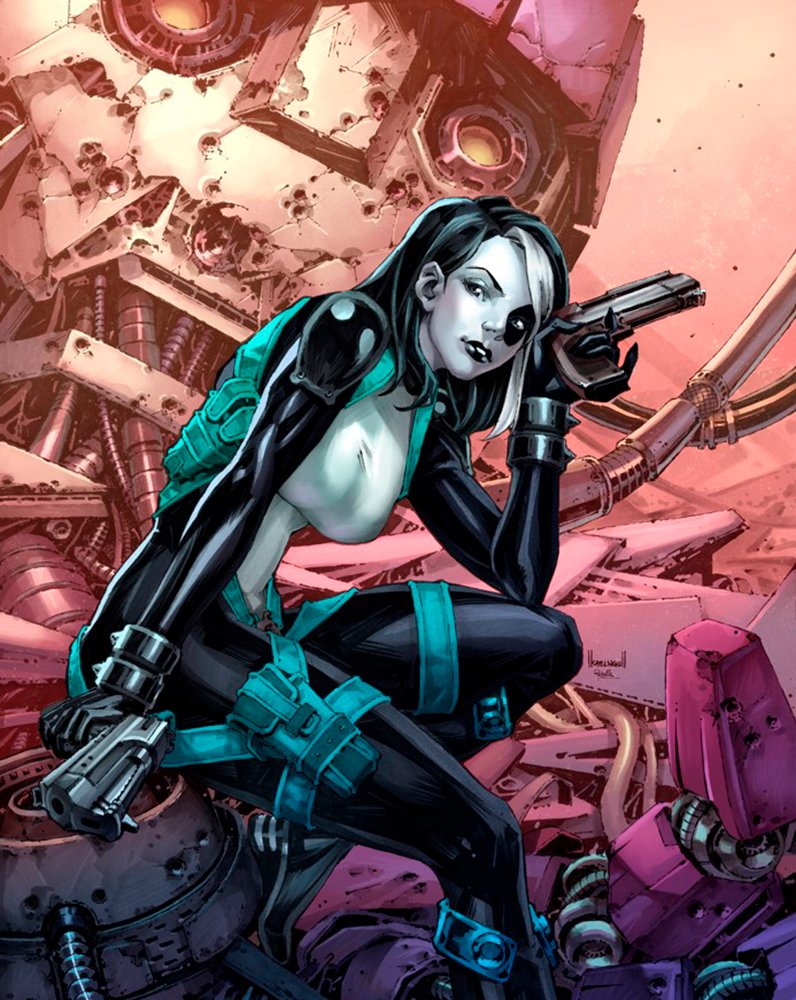 As if to taunt me over the post limit I forgot about for the official FB group (sorry mods I was half asleep, it won’t happen again!), Domino gets spoiled on tier list Tuesday. Without any further ado let’s break her down!

Starting off we have the “standard array” of 3 cost stats – 10 stamina w/ 5 on each side, medium move, size 2, and 3s across the board for defenses. Nothing special to write about here but we’ll get into more of the spicy sauce in her kit further down the line.

Her builder is the standard rapid fire attack we’ve seen on a few models now, and interestingly similar to her X-Force Alum Deadpool’s Bang attack. Since X-Force (and apparently Domino) are ALL about handing out incinerate like candy, stretching the utility of the debuff across a higher volume of attacks is always welcome. Also she’s very consistently going to generate 2 power when spending an action for this attack, which will help consistently fuel the other cool parts of her card.

Oh man, guaranteed incinerate? LOS ignoring? Explosive? Sign me up! One power is a small price to pay for a potent enabler. This also pairs incredibly well with Deadpools Yoink! card which allows him to make an out-of-activation grenade bounce while near Domino, allowing her to go full automatic with 4 Automatic Pistols attacks into a poor incinerated target. This also helps ensure that even on a split map you are reliably incinerating key targets without Cable’s assistance, which allows you to focus on characters banking on applying the status. Heck, Crystal might be an attractive inclusion to prevent people from shaking incinerate if the X-Force is soo good at handing it out.

Her ultimate, while solid, I don’t expect to be used except when Domino is swimming in power, unless the combination of power denial and stun is attractive enough. 3 power is a lot to spend on a single attack when she has such an insane power sink (more on that next).

This. This right here is where all the power you’d spend on Lucky Shot goes. For the small small price of a bunch of power, she can turn any and all skulls she rolls into crits BEFORE they explode! It’s essentially a better Reality Gem except for the part where it costs. Your worst rolls now turn into some of your best. And rerolls make her even deadlier now turning blanks / blocks on attacks into potential hits. As long as you can pay, 1/4 of all dice results are now functionally crits on both offense and defense. Do note that exploded/rerolled skulls can’t count as crits unless you overpay at the resolve criticals step, but still I think people are going to be caught off guard by how hard she can spike.

Finally, and not nearly as splashy as Probability Manipulation is Things Tend to Go My Way. Not only are you prone to spiking on your attacks/defences/dodges, but your opponent is going to be hard pressed to spike when hitting her, or taking hits from her. This will be a constant thorn in the side of anyone who is put near Domino, and will carry a surprising amount of weight by the time the game is over.

All in all I am pretty happy with Domino as an addition to the X-Force team. A clear picture of an attrition focused mid-range team that functions well on B/D is coming together the more I look at them. Whether they will be as strong as other offerings is up in the air until we see all the tactics in the Cable/Domino box but I’m cautiously optimistic.

As for out of affiliation I very much want to try her in a Cabal Rapid Fire list – more power means more Probability Manipulation means more damage means more power… you get the idea.

Finally, if you’re looking to pick up this dynamic addition to the game may I recommend our fine sponsors: