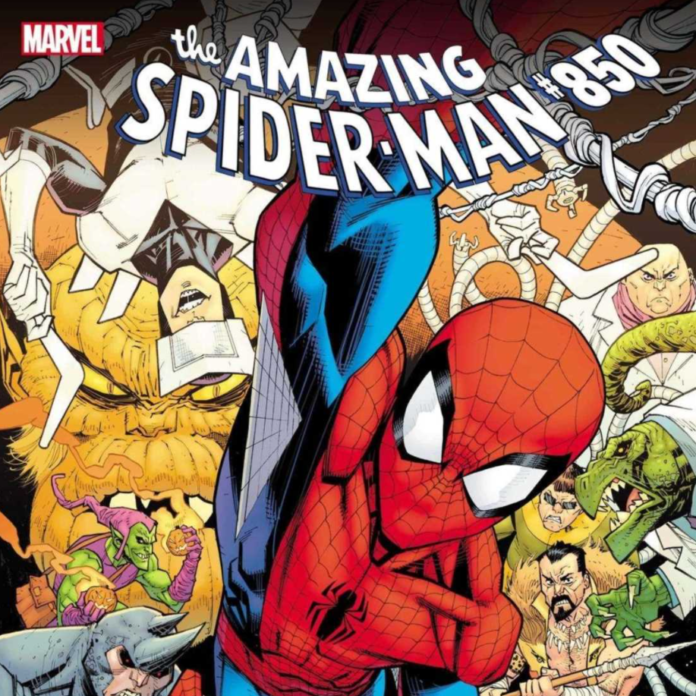 HOO BOY. For those of you who haven’t been paying attention to this week’s ministravaganza that AMG is putting on across both Twitter and Twitch, you might have missed a TON of spoilers, including a bunch of Web Warriors and Spider-Foes characters. We’ll be covering them on here over the next few days. To start things off I figured I’d go for the most exciting first: the Amazing Spider-Man.

Since the beginning, there have been a lot of players underwhelmed by the Spider-Man in the core box. The designers pushed back with “this Spider-Man represents Peter starting out, before he knows the ropes”. Well, this is Spider-Man at his peak, and boy does he deliver. Without any further ado, let’s get into the breakdown!

Normally I only include the stats in the first segment, but I want to take a moment to point out a key detail some might miss – Peter Parker is his alias. This means he’s the ONLY Peter Parker you can put in a roster if you put him in. Probably not a big deal as most people aren’t taking core Spider-Man all that often already, but something to keep in mind when building Web Warriors rosters.

Another identity issue comes in the form of Uneasy Allies.

I’ve been a fan of this card ever since Miles came out, because he is Spider-Man for the purposes of the card. The question stands, though, whether Amazing Spider-Man counts as Spider-Man, i.e. whether a sub-chunk of a name counts for name checks on special rules. From a thematic/fluff perspective I’m guessing yes, which means this card’s stock will continue to rise for fighty Web Warriors teams (which this new Spider-Man is amazing at).

Moving on to the ACTUAL stats, 12 stamina with 6 across each side is slightly low for a 5 threat – most have 14 across both their sides. That said, he has above average defenses, and a long mover which more than make up for the 2 missing stamina. He’s also a very standard size 2, which is to be expected.

But let’s talk about Peter’s bread and butter, his attack suite. Spider Strike is an upgraded version of Miles’ Webline Kick, in more ways than one (more on that later). In return for a more difficult trigger (crit in addition to wild, nearby enemy), Peter gets a potentially MUCH more powerful effect. He zooms to his target’s buddy and “pounces” into them while avoiding collision damage himself. In addition to another attack, a Momentum trigger will be the last nail in the coffin for most 2 or 3 threats unless your opponent has Brace For Impact up. This will be a brutal play on flanks to ensure dominance on split D scenarios.

Whatever a Spider Can manages to outshine Spider Strike as appropriate for an ultimate. Reminiscent of Beast’s and Baron Zemo’s ultimate, it allows for hit & run play (as long as you can get close) while still hitting like a truck with 8 dice. And, if you get a wild you get to top it off with a free throw. A small trick that might catch people off guard is you can order the move and the throw so you can run away to grab a piece of terrain from your further back position, and the “throw” goes through regardless of range or LOS. One thing’s for sure, this Spider-Man is going to have a flashy highlight reel.

Next we get to his Leadership ability (he’s a Web Warrior leader of course) which is just a GIANT wall of text. Basically, if you get up close and personal you can pay one power once on each of your character’s activations to either slow them, or if already slowed you can displace them by r1. This is VERY fiddly. You probably don’t care about the slow on them if you’re already within r2 unless you’re planning on running away. What I’m more interested in is the displacement. Being able to yoink someone off a point without an action is arguably one of the most powerful effects in the game. You just need to look at the likes of Wakanda Forever, Enchantress, and character throws dominating the meta to see that. The real question to me is whether r1 is consistently enough to work, and how easily you can apply slow to get it. The power cost is also mildly concerning considering Web Warriors massive round 1-2 power economy issues. Only time on the table will tell, but I’m excited to see all the strange angles this gets used on.

Edit: /u/Apprehensive-Drive60 on Reddit pointed out something that I completely skipped over. In conjunction with All Webbed Up this allows ANY web warrior on the table to spend 1 power to turn on the bonus attack dice. That’s absolutely filthy, and will make the big All Webbed Up turns even more powerful.

Moving to his first superpower we get Web Swing which TBH there isn’t a ton to say here that hasn’t already been said about Miles’ ability of the same name. It takes his builder from pillow-fisted to beefy, makes him consistently able to be relevant while holding isolated secures, and gives him a shocking amount of mobility in conjunction with his long move. Expect to be using this a LOT, and seriously consider taking Advanced R&D to use this round 1.

For his reactive superpower, Witty Banter is one heck of a reactive defensive tool. Rerolling attackers dice isn’t something we’ve played with in MCP yet but I think this is going to be incredibly strong. Rerolling a wild almost always (87.5%) turns off wild triggers, rerolling successes in general is a 50-50 to take one less damage. And most importantly, at the point where you choose to do this there’s no windows for your opponents to manipulate the dice after you, so you know exactly the potential impact of your reroll. In combination with his passive (more on that next) I expect Peter to be an absolutely obnoxious tank that people will tear their hair out over when they try to remove him.

Spider-Sense dialed up to 11 is the cherry on top of his 4/4/3 defense spread and Witty Banter. Being able to reroll ANY rather than UP TO TWO and covering mystic as well is a huuuuuge upgrade. He will consistently get ~2 blocks on each attack before applying Witty Banter, so as long as he has power I wouldn’t expect characters that aren’t dedicated beaters to be able to do more than a couple to him.

And to wrap things up is Wall Crawler which while pretty straightforward pairs pretty well with his extreme mobility both with his L move and M advance on his ultimate.

In conclusion, I think this Spider-Man is going to be a welcome inclusion to Web Warriors rosters as a piece particularly resilient to Mystic relative to his peers. His leadership is a bit of a question mark to me as to whether you’d prefer it over some nifty defensive rerolls (I often see you running both Peter and Miles in a lot of teams regardless of which leader you go for), but if you can set it up right the place effect could potentially be another feather in the Web Warriors’ control cap and the All Webbed Up plays are even bigger than before. I am more dubious of his place outside of Web Warriors, he has a solid control suite and is very mobile AND tanky, but compared to Angela, M.O.D.O.K. or Thor, he feels way less plug-and-play.

Edit: A further clarification has come up. Despite initially believing he’s on a 35mm base, Amazing Spider-Man supposedly will be on a 50mm base. Which means that Amazing Spider-Man is essentially a more tanky Angela for early scenario play. Assuming this is the case, I could see Spider-Man replace Angela splashes in a lot of rosters that want to skirmish and not fight.

That will wrap us up for this First Impressions article here on acrossthebifrost.com – let us know in the comments if you like this article format or if there’s something you’d like to see to improve on it! Expect more First Impressions to be coming out over this weekend and next week for the revealed releases.