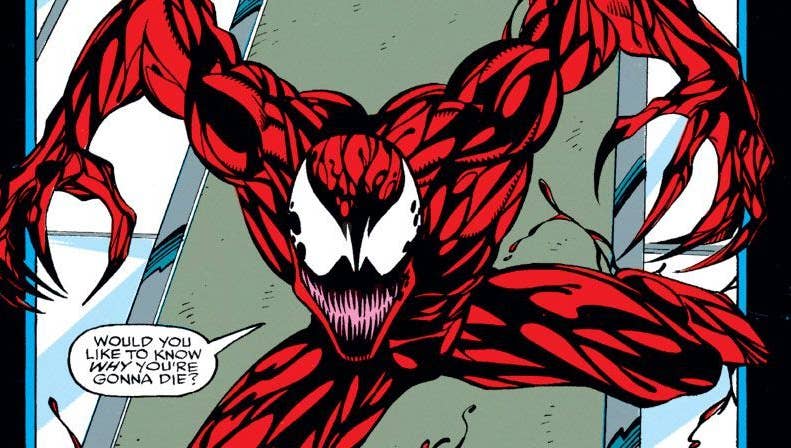 If you missed the First Impressions on Spider-Man from yesterday:

I promised a First Impression each day to cover all the goodies we’ve been given by AMG this weekend. After covering a hero, it’s only fitting to move on to a villain. And what a villain he is!

Cletus Kasady aka Carnage, is a staple villain for any fans of Spider-Man or 90s comics. A mad serial killer who bonds with the offspring of the Venom symbiote, Carnage is a being of pure madness and violence. And with even just a quick perusal of the card you can tell that AMG knocked this one out of the park from a flavor perspective. But, without any further ado lets start breaking him down!

Wow. Just, wow. I never thought I’d see a 5/1/1 defensive spread in this game. Physical defense is by far the most valuable defense type in the game, with energy being a semi-distant second. There are certain matchups where Carnage is nigh indestructible (Brotherhood’s only non-physical attack is Toad’s spender for example), and certain matchups that will cut through him like butter. That said, to compensate for the extreme weaknesses he does have 7 stamina on both sides for 14 total – comparable to a 5 threat character while being on a 4 threat body. Also remember that your dice pool can never be reduced below 1, so he’s partially immune to effects like Incinerate and Bitter Rivals, at least if they’re hitting him with energy/mystic.

Moving onto the attacks we start with Symbiote Tendrils, which is identical to Venom’s attack of the same name (though don’t let Carnage hear you say that). It’s a solid builder with r3 and bleed application but nothing to write home about on its own (more on that later).

Maximum Carnage, as befitting the callback to Carnage’s most famous run in the comics, is an absolute show stopper. If you can get him in range of enough enemies on compact boards like an E like Gamma or split C like Mayor Fisk, you can almost daze people through them blocking everything thanks to the rampage trigger on wild+hit. I would liken this to a throw trigger on attack as throwing a character on an attack adds an extra damage plus potential extra collision damage. However unlike a throw its ALWAYS 1 on everyone so no upside there and it doesn’t displace them, but it hits every enemy in range and bypasses collision immunity and damage reduction effects that aren’t Thanos/Xbones/Kingpin (watch out for those 3!). That said, the power of this attack hinges on what I said above – if you can get him in range to pop off. It’s not going to happen every game, or maybe not every other game, but when you do get that juicy Maximum Carnage off you’ll be glad you took him.

For the first superpower on his card we get Sadistic Glee, which is MASSIVE. A 5 dice Symbiote tendrils is ok but prone to randomly doing no damage in my time with Venom. Making it 7 dice for the low cost of 2 power and MAYBE 1 damage on a 7 stamina character is well worth the cost and a great opener round 2.

Additionally, notice that the bonus applies to the next “attack action” not “attack”. That means it effects every attack in a Maximum Carnage action. I can’t wait to see someone rush down my Carnage only for him to wake up, walk into 3 enemies, and do a Sadistic Glee empowered Maximum Carnage to daze all 3. Do make sure to take 1 damage for each attack in the sequence that rolls a skull and not just 1 damage though!

Next we get Paint the Town Red, which… wow. For one more power than Angelic Assassin (which is already incredible), Carnage heals to full. Between his wonky defenses and Sadistic Glee, the healing is going to be massively relevant, and considering how much he’ll be using his builder over his spender, if he takes someone out he’ll almost always have the power to do this.

Also weird trick to consider, you can use this mid-Maximum Carnage to alter who gets hit by the rampage trigger of Maximum Carnage. Obviously it doesn’t change the attacks you get, but if you want to shimmy to catch a support piece with some free damage after yeeting someone into oblivion.

In more of a flavor element than an important element, Cletus is the Arch Nemesis of Eddie Brock. Being able to reroll skulls and getting reroll any is well worth being forced to attack Eddie Brock if able (especially if you juice it with some Sadistic Glee – more dice to reroll and less likely to have skulls).

Finally we come to his last two passives. Wall Crawler is Wall Crawler, not much to say there except the extra mobility is quite welcome, especially for allowing Paint the Town Red to advance him onto buildings in certain cases. Symbiotic Serial Killer on the other hand is his equivalent of Venom’s symbiotic instincts. I think no dice modification for the defender > no crits, though perhaps that changes with the advent of Domino?

While we’re done with his card, though, AMG was also kind enough to gift us spoilers of his tactics cards. I can’t find box information so I don’t know what the exact names of these cards unfortunately.

First up we have an AOE Root application that scales cost with the number of people you decide to hit. Personally I think Root is an undervalued status currently due to the fact that AFAIK Groot is the only source of it in the game right now. However, people HATE dealing with Loki’s aura, and Root is in a lot of ways similar. I’m not sure its worth a Team Tactics card to hand out a status, but if Carnage tends to go deep it might have some legs.

For a measly 4 power, you get to move your opponent (probably off a point and out of range of your attacks) and make a free attack against them, which with any luck will refund you some of the power you spent. Unless Carnage has fundamental power generation issues which I seriously doubt, this is going to be a big draw for putting Carnage in teams, displacement plus damage is always in high demand.

All in all I am VERY happy about Carnage. I’m holding off judgment on Spider-Foes as a whole for now because I want to see Kraven, Lizardman, and more tactics cards for the affiliation/characters, but Carnage is a good start towards revitalizing the much maligned malignants. His low amounts of displacement might relegate him to pure attrition teams but Carnage plus GET OVER HERE is a solid fighty package that MIGHT get put in other affiliations but only time will tell. I’m expecting him to have some legs in teams that can bodyguard him against problematic attack types with pieces like Okoye, or buff his defenses to absurd levels with Cable or Doctor Strange or the like. All in all I can’t wait to see him on the table both on my side and against me, so I can experience Maximum Carnage personally!

That will wrap us up for this First Impressions article here on acrossthebifrost.com – let us know in the comments if you like this article format or if there’s something you’d like to see to improve on it! Expect more First Impressions to be coming out over this weekend and next week for the revealed releases.