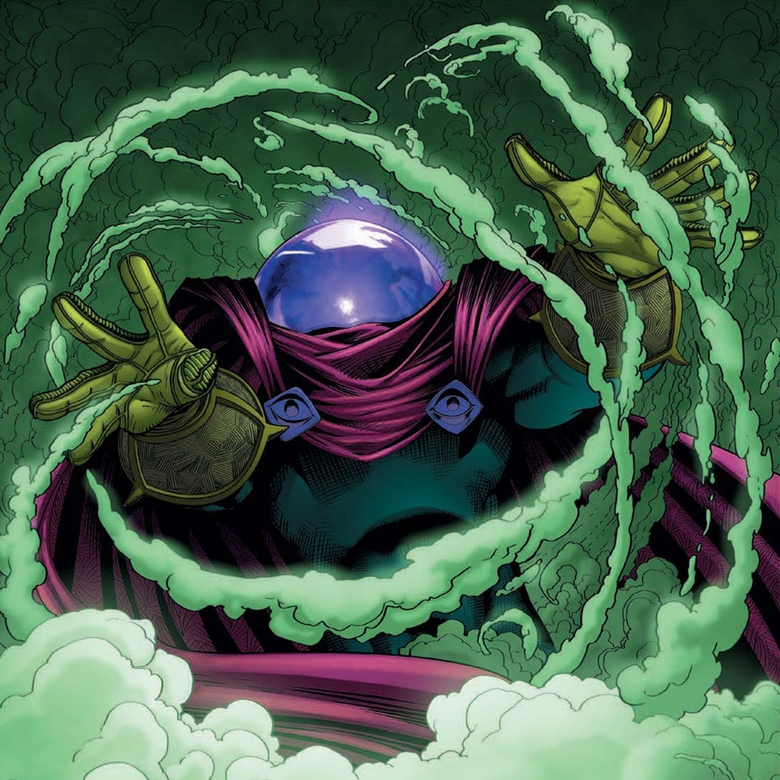 As I promised on the First Impressions for Spider-Man on Saturday:

I am here to complete the last First Impressions for the final character released at the ministravaganza – Mysterio.

Quentin Beck is Mysterio, one of Spider-Man’s oldest villains. A master of deception and subterfuge, he creates illusions in conjunction with deadly traps for his foes. Ever since Spider-Man: Far From Home I think a lot of people have realized exactly how cool Mysterio can be and have been excited for his release in Marvel Crisis Protocol. And with a quick glance at the card I think they hit the mark. But without any further ado, let’s break him down!

I find it WONDERFUL that they put Mysterio and Carnage together – 1/1/5 and 5/1/1 is a neat little connection to tie these Spider-Foes together. Barring his defensive tech (more on that later) Carnage obviously got the better half of the deal as the majority of attacks are physical and you need good physical to dodge. 11 stamina with 6 on the front is slightly above average for a 3 threat which is normally around 10. He is a short mover so just as slow as Crossbones which is a bit concerning.

Starting off with some razzle dazzle, Mysterio is afaik the only low threat character with a Mystic builder. Unfortunately, it’s only 4 power which means he’ll struggle to punch through even across the standard 3/3/3 array. Hypnosis Gas does have a really neat on damage trigger with advancing the target, and I want to take this moment to shout out the Spider-Foes leadership.

There’s been a fair bit of criticism for Oscorp Weapons, paying to reroll the defender’s dice has limited utility on the existing Spider-Foes. However, a mild attack with a GREAT on damage trigger is the perfect use case. If you’re doing exactly 0 damage and just need to spend a power to ensure your damage trigger goes off, Oscorp Weapons becomes a very welcome tool. 5/8 of the time you get the trigger off and get your power back for your trouble.

Curtain Call I’m a little less wowed on. This kind of big spender will basically only be used when someone like Thor charges in and dazes him, you can pop back up, throw the threat away and stagger them to keep yourself safe. But I highly doubt this attack will be used proactively often.

An upgrade of Rocket Raccoon’s booby traps, this reactive superpower is totally recontextualized by a character that excels at moving enemies. Both of his attacks move enemies, and if you have 3 power after the attack you can sneak in an extra ~damage with some upside. If Mysterio spikes like crazy this’ll be a huge help, and sometimes it’ll come in clutch when you leave a key target at 1 stamina. And god help you if you’re trying to charge into a Mysterio sitting on 3 power. It does seem a bit expensive, though the next ability DOES help with that.

This passive is so important to Mysterio’s functionality. Bountiful power generation and nigh-immunity to collision damage are both things that a squishy guy with a bad builder wants desperately. Do notice that this is whenever he rolls dice, not just for attacking, dodging, or defending. So, interact rolls on Secures/Extracts like Alien Ship or Origin Bombs will potentially be refunded (though don’t roll for Origin Bombs with him unless you’re desperate!).

The next layer of improving Mysterio’s defensive capability, a reskin of Enchantress’ Enchanting, makes Mysterio nigh indestructible round 1, and surprisingly tanky in future rounds unless your opponent is swimming in power. Bonus points if you pair him with Ghost-Spider to yoink him back after your opponent pays, or Okoye to bodyguard.

The final piece of his defensive suite is Stealth. I feel like a lot of characters fight at mostly r3 or shorter right now so it won’t come up a TON, but with X-Force leveraging a lot of R4+ attacks, M.O.D.O.K., and Web Warriors potentially all being a thing in the hypothetical meta in which Mysterio potentially releases in, it’ll still be a welcome and fluffy addition. Flight as well doesn’t do much as he’s already a short mover but it DOES allow advance effects to move him up terrain which is a mixed bag.

Overall I see a tanky controlling character who lives to hold a point 1v1 against another 3 threat character. But if your opponent is willing to spend the time and energy to deal with him, he will fold like a piece of paper – appropriate for how Spider-Man deals with Mysterio in his encounters. We do not know what his Team Tactics card(s?) do yet, which might totally recontextualize him. He’s affiliated to both Criminal Syndicate and Spider-Foes, further encouraging a CS/SF combo roster in which he’d be a neat bridge between the two. Personally I’m more excited to see him in CS for B/D secures where he can sit on his own and triage versus another 3 threat while he counts as 2 bodies for holding the point. It’s hard to tell what the “standard” spider-foes team looks like right now as we still haven’t seen Kraven and the Lizard but Mysterio will almost assuredly be a welcome addition if for nothing else than to give you access to mystic in a team that will be exclusively physical/energy otherwise.