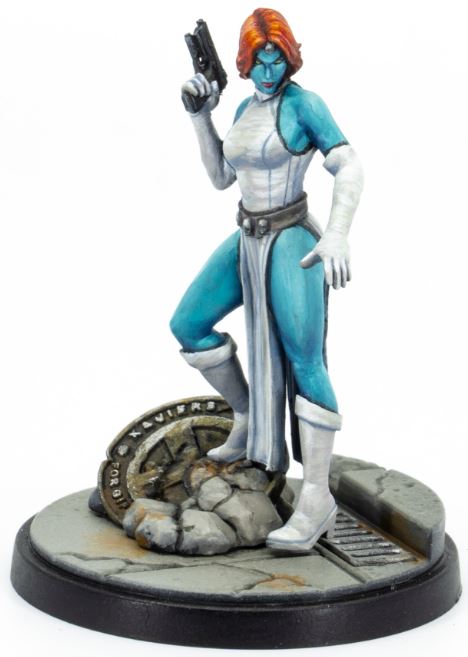 Mystique has the potential to be a tricky one design-wise. After all, how on earth do you design a character who can be anyone? Let’s see if AMG managed it…

STAMINA – Mystique has a respectable 5 stamina.

ATTACKS – Raven has 2 attacks, the first of which is physical and is called Pistol. This attack has a range of 3, strength of 4 and power cost of 0. After this attack resolves Mystique gains 1 power, and roll a hit and you can trigger Rapid Fire. This lets you make an additional Pistol attack that must target the original target character. I’m normally pretty down on attacks with a strength of 4, but given that you get to do 2 back to back if you roll a hit and that hits are pretty common I am on board with this, the only downside being quite poor power generation.

Next is another physical attack, this time called Espionage. This attack has a range of 2, strength of 6 and power cost of 3. Before damage is dealt the target character gains the Stun special condition (when a character would gain power it only gains 1 power). It is a nice change to see a simple, straightforward big attack on a character. Automatic Stun is nice to have, and the strength is decent enough.

LEADERSHIP ABILITY – Mystique bears the second of our Brotherhood of Mutants leadership abilities, and hers is called Freedom Force. Once per turn after an allied character interacts with an extract objective token, after all effects are resolved, the allied character gains 1 power. This is a nice way of getting some extra power onto Mystique’s allies which all helps out in the long run. But hark, there is more! Allied characters also have access to an ability called Interact (Secure Objective Token) which can be triggered when an allied character interacts with a secure objective. This ability states that you can place a token on the secure objective token. While this token is in play you are securing the objective. Remove the token if an enemy character contests this objective token. You may only have 1 token in play at a time as a result of this ability. I LOVE THIS! So many times in games I have a character just sat at the back scoring points and not doing a great deal else unless an enemy character comes near. With this ability you can keep a back objective secured and move off to do something else. This opens up so many options – keeping your back gamma shelter whilst your forces push forward, or holding as many origin bombs as you possibly can!

SUPERPOWERS – Mystique’s first superpower is active and is called Expert Sabotage. This superpower costs 3 power to use and an action. Mystique gets to choose an interactive terrain feature of size 3 or less within range 4. Enemy characters within range 1 of the terrain feature suffer 2 damage. The terrain feature is destroyed and removed from the battlefield. This superpower can only be used once per turn. I like this, it has that Green Goblin/Punisher kind of ability where terrain can be used to damage characters, and this would feed nicely into Magneto’s leadership ability which generates power from terrain being destroyed. Plus, it’s always fun to set some charges and then wait for the right time to hit the button…

Next is an innate superpower called Martial Artist. This superpower states that when Mystique is defending against a physical or energy attack targeting her from within range 2 she can add blanks in her defence roll to her total successes. This kind of ability is always fun to see, but then I am a fan of any free abilities that help you out with your defences.

Next is another innate ability, this time called Shapeshifter. This superpower states that during Mystique’s activation enemy characters cannot use reactive superpowers or reactive team tactics cards. This is just a crazy ability – mystique can just totally shut down an enemies reactions for her whole activation – that means no Bodyguard, no Counterstrike, no Martial Prowess, no Trickster and so on! I particularly like this against Ronan’s The Accuser reactive superpower which would normally let him move and make a free attack – not today Ronan! And the amount of team tactics cards this just negates is crazy! It’s a good job Mystique doesn’t have a heavy-hitting big attack. The flavour on this is glorious as well, she s walking freely amongst enemy characters because she is in disguise. Delicious!

Last up is the Stealth innate superpower. This states that characters must be within range 3 of Mystique to target her with attacks. I like this, you have to be in the sweet spot between range 2 and 3 to get the most from your attacks against Mystique.

SUMMARY – Mystique seems like a fun Black-Widow’ish character, with the added bonus of being able to blow up buildings and shut down enemy reactions. I’m very much looking forward to getting to grips with her more.

AFFILIATIONS – Mystique fits nicely in with Magneto’s Brotherhood of Mutants, with some nice synergy between the leadership ability and her Expert Sabotage superpower. This nicely helps to build up power reserves across the team.

Cabal would also be great with Mystique if you are looking to use her Pistol attack often. You could fire off this attack, gain a power from the Cabal leadership ability for doing damage, gain a power from the attack, then trigger Rapid Fire to do it all over again. If you get a hit each time that’s 4 total power earned from 2 free attack! Not bad.

If running Mystique in a Magneto Brotherhood team then you could consider Magnetic Refraction which costs Magneto 2 power to play. Magneto gains cover this round, and allied characters gain cover whilst within range 3 of Magneto this round. And, if you are using the Brotherhood of Mutants affiliation, you can return this card to your available team tactics cards during the cleanup phase, it can be played again this game. So, our first recyclable team tactics card – nice. Cover is something which I am too prone to overlook in this game, but cover saves lives. Having this card in hand is no bad thing in my eyes.

Onto the more general Brotherhood of Mutants affiliation cards now – Asteroid M is active and requires 2 Brotherhood of mutants characters to spend 2 power each. Once paid for you get to place one of the two characters not holding an objective within range 1 of the other character. A nifty way of shifting Mystique’s location a little, or teleporting right across the board if you find that she is away from the action a bit. Great for getting her in position to stick a token on an objective for securing. This reminds me of the Black Order’s Mothership card – very powerful indeed.

The next Brotherhood of Mutants card is called The Books of Truth and is reactive. It states that when an allied Brotherhood of Mutants character is attacking or defending, at the end of the modify dice step of the attack, before the calculate success or failure step, it may spend 2 power. This character rerolls all of their attack of defence dice, including failures (skulls). I really like this – you can see the results of both rolls, and then decide to redo yours. One caveat however, you won’t get to explode criticals from the new roll or modify your dice in any way, because that step has passed – what you roll is what you’r stuck with. Still, if you’re about to lose a critical character and you whiff the defence roll it is a good card to have.

As Mystique is also Cabal affiliated we should consider some of the Cabal cards. Cosmic Invigoration could give Mystique an additional activation if she is close enough to Red Skull to trigger the card. And Dark Reign will allow you to focus rerolls when attacking a specific enemy character – very handy if there is a big threat that you desperately need to take out.

As for more general team tactics cards which you could use on Mystique one in particular comes to mind. Face Me could be good if you can set it up alright. If you can get Mystique into a position where she can advance an enemy character its speed towards her but end its movement outside of range 2, then hopefully the free attack they get won’t be much use against Mystique, and you’ll have gotten and enemy character out of the way for a little while.

Before I sign off I just want to mention Black Gate games who are based in the UK. They have MCP – you want it, they want to sell it, and they’ll give you a great discount. Check them out if you are in the market for some more plastic goodness.

That’s it for now. See you next time!

Venom in 1 min or less