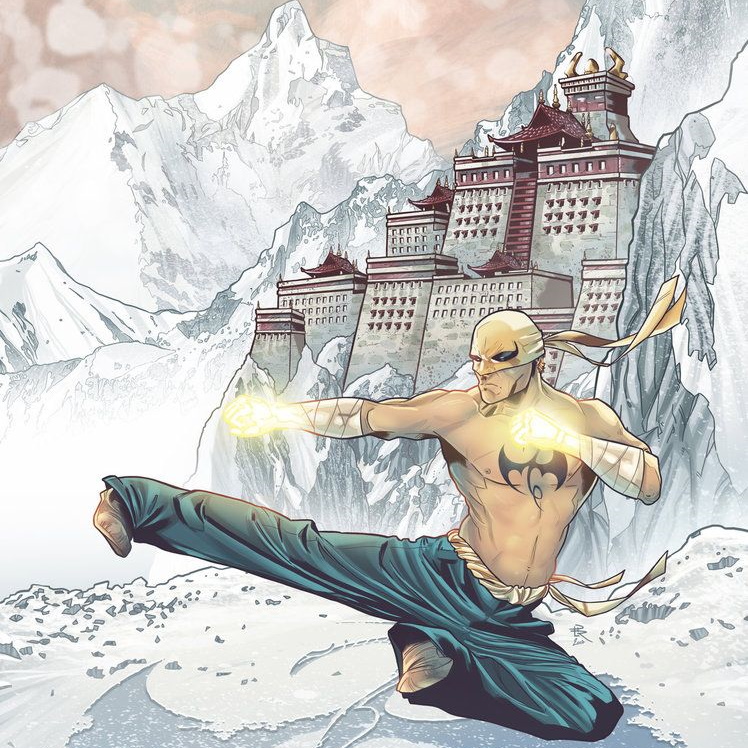 It wouldn’t be a monday morning without YET ANOTHER CARD REVEAL!

People were expecting the Iron Fist spoiler to be imminent with Luke Cage off on Friday, and AMG didn’t disappoint. Is Danny Rand, the Immortal Iron Fist and defender of K’un-Lun good enough to keep up with Power Man, though? Let’s find out.

First things first we start off with a somewhat less impressive stat block than Cage. Same threat but 1 less physical defense and 1 less stamina on the front side. In conjunction with his Master Martial Artist (more on that later) he might actually be tankier than Cage though (at least against not-mystic). I was kinda hoping he’d be a long mover as a lot of our more acrobatic characters seem to be, but I think he has more than enough mobility in other parts of his kit (more on that next).

Talking about builders, Iron Fist has an impressive pair! An energy strike builder with a wild stun trigger is very nice. A lot of defensive tech covers energy as well as physical, sure, but not all, and energy defenses tend to be slightly lower on average across the board. The chi strike might not be much more than a french vanilla on the standard strike, but all the little bits add up.

More importantly, we need to talk about Flying Kick. At first this might seem like a lame option with its 4 power but with r3 and flat power generation it would already be a welcome addition. Adding a r1 place onto it completely changes things up though. This means on basically every activation outside of round 1, Danny should be making at minimum 1 attack but realistically 2. Someone throw you off the point short? Flying kick back to them and slap them around with a chi strike. Wakanda Wave-d into oblivion? Move -> Flying Kick onto someone to cover an obnoxious amount of ground. Hell, in the right circumstances you can chain flying kick into flying kick to make it an impressively long way across the board in a pinch. The flat power generation and place is extra important for his spender as well.

Talk about a spender! Just… wow. AOE damage to enemies, a stagger/throw trigger that gets upgraded to applying an activated token (no throw) if they haven’t activated yet. Combined with his excellent power generation from being an Immortal Weapon and his solid pair of builders, and literally no other way on his card to spend power, I’m guessing you’re going to see the Iron Fist slap people silly more often than you’d expect. It’s not guaranteed (or even more likely than not) for round 2, but I can see a world where you advance into a flying kick on round 1, starting round 2 with 5 power and chi strike someone for the last 3 and unleash a can of whupass on them. With No Matter the Cost you can force the issue at the low, low, cost of some health and a tactics card as well. And if you do that with priority its basically a guaranteed “daze” before they can go because you either yeet them into oblivion or they get an activated token. Win-win (as long as you don’t care about losing priority)!

I’m also super interested in how this ultimate will make interesting decisions for Danny. Do you wait out a particular character so when you give them the ol’ Iron Fist they get thrown for extra damage and staggered for the next round? Or do you turn off a key model for a round knowing that it might cost you priority? And on the flip-side for your opponent, do they attack you to try and daze you knowing if they fail the inevitable consequences is you getting the power to throw another Iron Fist? There’s a lot of really cool decision making baked into here and I can’t wait to see what people do with this on the table.

Finally we come to Danny’s passives. First we have the Immortal Weapon passive which grants him an extra power much like an Asgardian. As already mentioned above it really helps him consistently get out a round 2/3 Iron Fist attack to change the course of the game. It also makes him an excellent facilitator for paying for tactics, but I would be concerned about his lack of utility/control on the board if you expend his power on tactics rather than some good ol’ fashioned Iron Fist to the face.

And to wrap up his card we see that he is a Master Martial Artist. Somewhere between the standard Martial Artist and Daredevil’s Radar Sense, upgrading the buff from r2 to r3 makes a world of difference. The meta is currently dominated by excellent r3 attackers like Medusa and Enchantress right now, so always counting blanks against the current ideal fighting range is excellent. In the case of Medusa in particular it’ll make it real hard for her to push you around, forcing her to Hair Flip you if she wants you reliably displaced.

All in all I’m curious to see how the Iron Fist will work out on tables. That spender is absolutely absurd and I really like how reliably he attacks for both actions in an activation, but the lack of utility/control elements is always a bit of a hard sell in this control focused meta the game is currently in. That said, if you’re just playing brutal attrition matches at the store with friends I expect the Iron Fist to be incredibly effective at bringing the pain to your enemies. His frontline survivability alongside Cage might allow for a Defenders team that plays more front to back attrition fighting like Cabal than their current emphasis on portal shenanigans. Though perhaps portal shenanigans are still in his future as doing a flying kick out of a portal gives you a large area you can threaten to Iron Fist. Only table time will tell though.

Finally, if you’re looking to play some Netflix Defenders and haven’t preordered this box yet may I point you in the direction of our incredible sponsors: