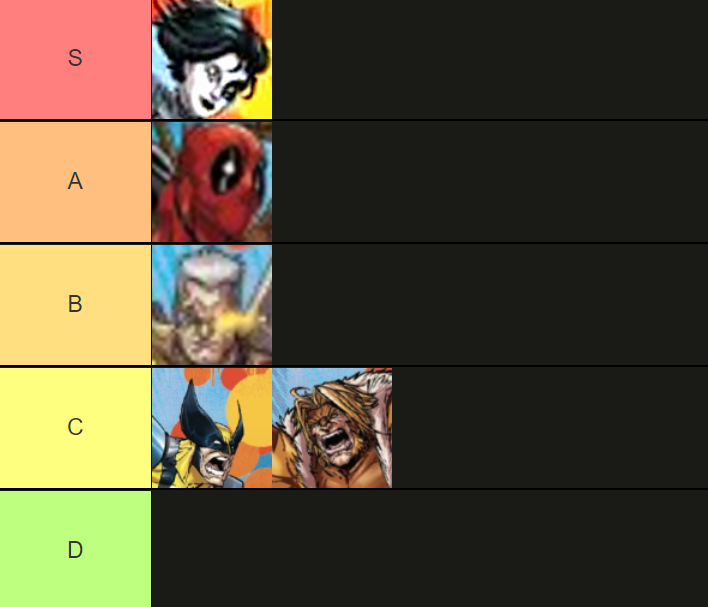 Another Tuesday, another tier list! This time, we’re skipping past the Web Warriors for now (as Amazing Spider-Man is on the horizon) and going straight to the X-Force.

X-Force have received decidedly… mixed reviews with people dojoing them for their upcoming release. They can put out an impressive amount of pain from a surprisingly long distance, but they live and die on a strong opener. Personally through dojoing them I found a love for the X-Men, and have been just taking Cable and Domino in a “better” affiliation. But, that’s besides the point. You’re here to see tiers so lets get to tiers!

– All rankings are based on playing these characters in the given affiliation. They might shine elsewhere but we’re focusing on in the context of X-Force rosters here (although splash options for roster building will be taken into account)
– Leadership abilities are not factored in to a leader’s evaluation unless a faction has multiple leaders (so leadership WILL be factored in here)
– Gems won’t be ranked on their own merits they’ll be folded into their affiliated user’s ranking (obviously excluding Black Order).

As an additional explanation here is the rough ranking of the tiers as I see them:

A – All-star. You’re going to be playing these characters a LOT as part of your core team, and might be important to playing other affiliations in your roster.

B – Generally Solid. They synergize well with the affiliation and you’re happy to play them.

C – Okay. They’re not bad per se, but they don’t have the strongest synergies with what the affiliation is trying to do.

D and below – Somethings wrong here. The character probably isn’t worth its points, has zero synergy with the affiliation, or sometimes both.

And with those details out of the way, lets get to the rankings!

Domino – S – Anyone who has put her on the table knows just how deadly Domino can be. In the X-Men Tier List I rated her as an A but I think I’m starting to trend up on that evaluation. She does an absolutely painful amount of work with basically 0 support, multiplies dice better than pretty much anyone else, and has built in support with her guaranteed incinerate attack. Just… wow. In general she’s an absolute monster in a meta that puts such a heavy emphasis on r3 because she punches so high above her weight class at r3 – especially into Medusa who will struggle to damage her reliably which means if she doesn’t get power to throw she’s about to be lit up. She might not have any cool control or support abilities but in return for not having those you get the most efficient midrange fighting 3 threat character in the game.

She is, of course, also X-Men. In fact, I expect X-Force rosters to pretty much always also be X-Men rosters due to 3 of the characters you’re probably going to take the most being both X-Men and X-Force, so its not necessarily an upside moreso than a fact of the affiliation. But the way that she revitalizes X-Men is a BIG selling point. We talked about Medusa struggling to hurt Domino reliably in X-Force, it’s basically impossible for Medusa to hurt Domino under Storm’s Leadership. But more importantly, she means you can build off of a 9 threat core of Storm, Domino, Beast without resorting to Taskmaster. I already talked this up in the aforementioned X-Men tier list and I think I’ll leave it there but just know that Domino is the main draw of most X-Force teams.

Deadpool – A – This is the kind of 3 that you don’t mind taking as an out of affiliation character, and he is surprisingly synergistic with the leadership and tactics. Bang is way more likely to be followed up by a Bang Bang with a second reroll, and attack spam loves effects like Incinerate/Hammers which X-Force are definitely focused on. He’s also very tanky for a 3 (outside of randomly getting dropped out of nowhere on his healthy side due to 4 stamina), with rerolls and Healing Factor adding up to a deceptively large amount. Merc with a Mouth is quite plainly obnoxious in attrition battles (though if you’re all in on a Banging spree Deadpool can be kinda power poor), turning off key charges and throws that stretch the team’s efficacy just a little bit further. Pair that with always counting as healthy for contesting and an always on PSD and he is a very attractive scenario focused piece.

Wade isn’t only an X-Force member though, he joins Cable and Wolverine in the Avengers who can make good use of the discount to squeeze out more Merc With A Mouth uses. And even if he’s not got other affiliations he’s situationally splashable in secure-focused teams like Criminal Syndicate (and perhaps Sin Cabal?) so he can help make some of the less compatible affiliations make a case for an X-Force splash.

Cable – B – I’m sticking by the same rating Cable had in X-Men, he’s a solid anchor on D/B secures, especially with the revelation of Cat and Mouse.

Now, Cable can stand on a midline C/D/E/F point and still double tap. Double tapping rather than single tapping is a huge boost to Cable’s effectiveness – a huge part of how good he feels depends on how much damage he does round 1 to a target, and a bonus attack (hopefully with the benefit of incinerate) is a big help. Park him on a key point from the start and good to go! Do damage on the first shot? Perhaps you grab the midline extract you came for and retreat. Eat your heart out Angela!

Of course, he’s also X-Men, and not to belabor the Storm’s Leadership > Cable’s Leadership point but I think his value in X-Men being less than Domino’s is a decent chunk of the rating difference between the two. He’s a situational guy who will be amazing in some situations, and somewhat underwhelming in others compared to the raw power of high end 5s like M.O.D.O.K.

I would be remiss to not discuss the admittedly quite intriguing option of Avengers Cable. Personally I haven’t put enough time with it on the table, but being able to grab extracts and retreat like a budget Angela is quite intriguing, and he has weirdly long threats out of nowhere with Avengers Assemble into Body Slide (which he’s guaranteed to have power for with Avengers discount). Perhaps there’s legs to an Avengers/X-Force combo with 3 overlapping characters. Or if you want to get really spicy, Avengers/X-Force/X-Men. The ceiling’s the limit!

Wolverine – C – I’m conflicted on Wolverine here. Thanks to Cat and Mouse he can kinda do a discount Portal Barrage opening play (less the second attack follow-up) and a man who puts so many of his eggs in the wild trigger basket LOVES rerolls. But from playing him in proper X-Force teams he often feels… clunky. You aren’t really fixing his inherent power issues, or his lack of mobility without power (well I guess you’re half fixing that with Cat and Mouse? But then you aren’t doing more exciting things with it with Cable or Domino). If you get into the mix fast and get power to Barrage -> Slash or show what it is that he’s the best at doing, then you’ll feel his value but it’s just as easy to have a game where he just won’t carry water.

He does have all the same affiliations as Cable, so it’s likely that however you mix X-Force into your Avengers or X-Men Wolverine will follow. And when you need to bump things up by a point its not awful to turn Deadpool into Logan in a pinch. If you want Wolverine at his best try him in Defenders, but he’s an okay role player here.

Sabretooth – C – This is a bit of a speculative rating as I had not dojoed with Sabretooth in X-Men. That said, he makes an intriguing case for “Healing Factor Tribal” between Wolverine and Deadpool. Taking him is an interesting option to alleviate pressure against using Weapon X Program or X-Ceptional Healing. X-Force as I’ve played it has been mostly more mid-long range leaning on Deadpool and Domino but Wolverine/Sabretooth makes for an interesting core on Ds where one takes each side with Cable holding the home point. That said my experience with Sabretooth in Brotherhood testing at least has been very inconsistent (much like Wolverine) so YMMV.

His Brotherhood connection is a bit interesting as Cable excels on Bs just like Magneto. And his Cabal connection has a similar draw for Cable who can slot in for M.O.D.O.K. when you’re forced onto D (though why not just play X-Force instead of Cabal on D). It’s not the best direction to go compared to the relatively smooth transitions for X-Men and Avengers, but if you want to get weird with it he’s here for it.

That’s going to be it for this week’s tier list! Let me know in the comments what pieces you think I overrated or which pieces I’m sleeping on. If you want to make your own X-Force tier list you can make it here:

Across the Bifrost Ep114 Dormammu