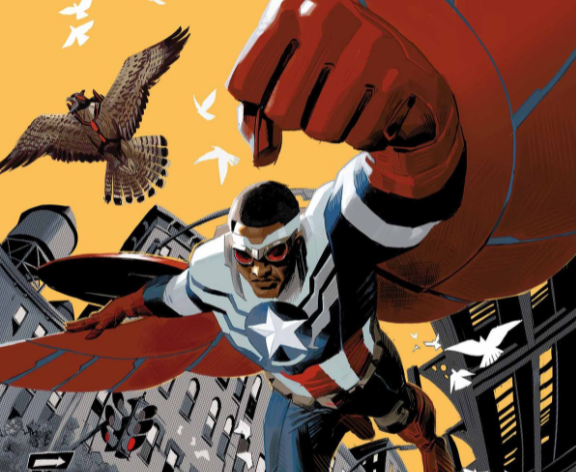 Another day, another First Impressions! This time we’re covering the All New, All Different Captain America – Sam Wilson!

Falcon / Captain America has been hyped up for the game since release as people have been eagerly awaiting the ability to play out the Captain America: Civil War airport fight since the beginning. And with this box we get both the remaining missing characters with Falcon Cap and Warmachine. But do the rules live up to the hype? Lets dive in!

A standard array of stats with the added bonus of a Long move. Pretty much expected for a character whose main defining trait is “air support”. Nothing to complain about, nothing to rave about.

Speaking of raving, I am here for this builder! Flat power generation with a bonus attack wild trigger AND a push on damage trigger if size 2 or smaller. In the current meta it feels like there’s very few Size 3+ characters – Venom, M.O.D.O.K. She-Hulk and Thanos seem like the most probable culprits but besides that it’s Size 2 city at the moment. The bigger problem is actually doing damage on 4 dice without any special reroll tech or somesuch but with the Ricochet in play I have a feeling there is going to be a lot of angle shotting into backline support pieces to push them off of points which will trip people up a LOT.

And if you want a bit more oomph look no further than his spender. 6 dice and a throw (assuming the target isn’t size 4) at r3 PLUS a r2 place is a great deal for a supportive 3 threat character for 4 power. Much like his builder this has a LOT of scenario potential. My main complaint is that the mobility effect of the spender doesn’t synergize with Air Lift (more on that later) which would have been a nice little top end play to pull off but I’ll settle for what we’ve got here.

Hoo boy, this is probably the reason you’re excited about Sam Wilson. For those of you who are Warmachine veterans, this probably gives you a lot of Vyros2 vibes. Unlike Warmachine though you don’t get 10+ characters who can benefit from the effect. A standard game sees you playing 5 wide. From some time in the dojo vs Falcon teams, you want to be aggressively pushing for 6/7 wide. Which in and of itself makes Falcon teams a novelty in a meta where playing outside of 3-5 wide is kiiiinda trolling. But his leadership is PERFECT for playing swarms, giving you scenario presence (free moves), power, and healing for your army of 2 and 3 threat zerglings going pop. This is definitely a “build around me” leadership and I expect Falcon players winrates will be in line with how well they build to take advantage of an incredibly powerful (and even moreso specialized) leadership.

I love more action economy on Falcon. Being able to move into double shield throw is going to be a welcome pattern for the All New, All Different Captain America. Turns out, a long move plus a range 4 attack covers a LOT of ground. Double tapping with shield throw AT MINIMUM gets you the power for your charge back, potentially 4 power for your troubles with a bit of wild luck. In addition it can open up Air Lift plays when flush on power to help allies position a bit better.

Solid positioning tool. I’ve griped already about how it doesn’t work with Redwing Assault but thats just a flavor / top end performance issue thats minor in the scheme of things. This is a great tool to use after your opponents whole flank / team has gone, moving one of your squishier characters like Nebula or Hawkeye up into range to set up a full output activation from them without retaliation. It can also be used early in the round to pull someone back to safety before the enemy hunting them can go, or even pull characters back onto a secure they stepped off of for reasons. It’s just some nice glue that will squeeze more efficiency out of Falcon when you have power to spare.

Captain America would be remis without some Vibranium powers to keep him alive. Rather than counting blanks, Falcon can spend 2 for +2 defense dice on physical/energy. If he gets focused by your enemies this power will be worth its weight in gold. If ignored, well you can dump your power into Charges and Air Lifts and sneak in some Redwing Assaults.

Overall I’m intrigued by the latest addition. Alongside his “second leader wave” classmate Sin I like that they are introducing leadership abilities that encourage going 6+ wide, and I like even more how unique the two leaderships feel from each other. Will he cut muster in competitive events? I’m not 100% sure yet. Will he bring a unique playstyle that will keep everyone on their toes regardless of meta relevance? You betcha.

Finally a shout-out to our not new, not different partners who always have the best deals on MCP online: