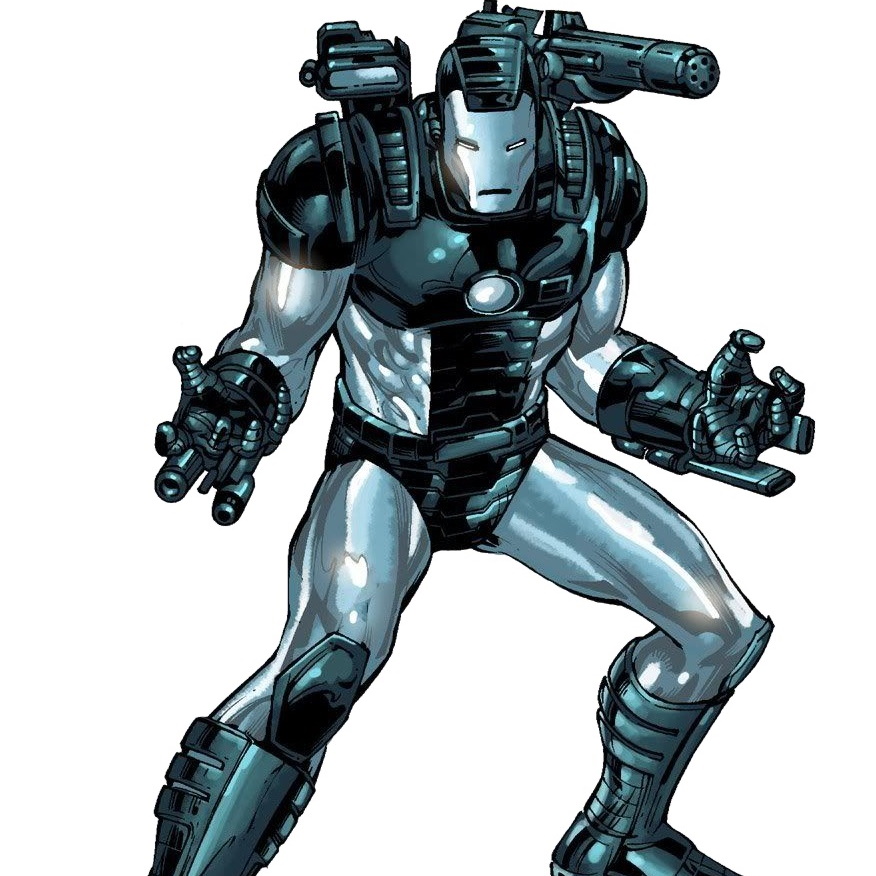 Wait, wrong warmachine that Schick and Pagani worked on? Whoops.

James “Rhodey” Rhodes (does anyone else feel weirdly compelled to spell it Jhames or is it just me?) is War Machine, former body double for Iron Man and the Bucky to Tony’s Cap. When I was a kid I always thought War Machine was a bit cooler than Iron Man because black & silver > red & gold, and who DOESN’T want an extra gatling gun? But lets dive in and see if he lives up to my childhood memories.

Oh baby, now we’re talking! An extra physical defense on top of the standard array of 3 threat stats, which pairs incredibly well with his titanium armor plating (more on that later). Admittedly these are the exact same “tank stats” as core box Iron Man who sees almost literally no competitive play, but I think as we get into the rest of Rhodey’s kit he’ll emerge as a slightly more attractive option.

Rhodey’s bread and butter, Metal Storm is going to be BY FAR the most common action he takes on the board. Beam 3, 5 dice, power per damage and wild bleed is a brick to the face, putting him up in the upper tier of 3 threat damage output alongside (though realistically behind) Domino. Sure it has less range and no push (and physical is arguably a worse attack type than energy) if comparing directly to Iron Man’s repulsor blasts, but the beam, bleed, and extra attack die more than make up for what it gave up.

If Metal Storm maps to Iron Man’s Repulsor Blasts, this is an analog to Tony’s Homing Rockets. Again range is sacrificed (and so is damage) this time for a potentially more attractive prize – a bonus attack. LOS/Cover ignoring an an auto-point to nearby enemies is a big price but this is also free when Tony’s Homing Rockets cost 2 power. You’ll probably be mostly using this on targets that dance outside of your r3 threat range. And between this and Metal Storm get Hammers / Kraven / Lockjaw stat to dial up the bonus stacking on his high volume of attacks.

This… might be the best damage output spender on a 3 threat in the game? The only one that could possibly compete in my mind is Dragon Fang on Valkyrie with the flurry. But… wow. This is going to melt faces (and Rhodey’s as well if you pop too many crits). With his 0 power sinks outside of this he’s either going to be dishing out some murder-suicide real fast or will make a solid tactic bot. Probably some combination of both? The threat of double moving him round one into a Metal Storm for 2 power to Empty the Clip on someone round 2 is going to be a rude awakening for some people. If they didn’t allocate enough characters to one side, this kind of opener can collapse a flank out of nowhere. MUCH better than the Unibeam in my opinion. Also pair this with rerolls to save you from too many crits if you don’t want him to go pop alongside his target.

Between the AoE nature of his free attacks (NOT Builders, as Rocket Pods doesn’t generate power) and his innate tankiness, Rhodes is excellent at fighting while outnumbered, requiring your opponent to spend a disproportionate amount of resources to out-fight him on a flank. Push him away? He’ll move back, then angle to catch multiple people in his Metal Storm, giving him two attacks in an activation anyways. Leave him alone and he’ll double tap into you however he sees fit. Sure he’s not a control piece like Shuri, and sure he doesn’t have a character throw like Valkyrie but he’s a decently efficient 3 threat Avenger who would go great in a team led by Sam Wilson which emphasizes going wide (which by necessity needs good affiliated 2s and 3s).