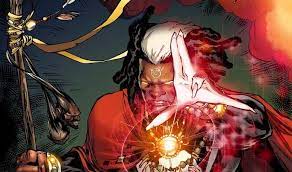 Another Tuesday, another First Impressions! After a couple jam packed weeks of releases the hits keep on rolling. This time, Doctor Voodoo:

With the aid of his dead brother, Doctor Voodoo is a mystical powerhouse who has been at points the sorcerer supreme. But does the voodoo that he do do be what you want in MCP? Let’s dig in!

2/2/4 with 12 stamina across both sides seems like a pretty lackluster statline but without going too deep into the rest of his card just now, he starts at a much more impressive 4/4/6 (on dodge too) so its not as bad as it seems at first blush. Admittedly if you ever turn off his tools and are standing around at 2/2/4 you kinda deserve to go pop at a moment’s notice but definitely something to think about with your 4 threat character – thats a lot of investment to lose.

I love this. After seeing a few 5s with a range 4, 5 dice wild sap mystic builder its nice to see a 4 threat with a budget version at range 3. Punches just as hard but without the nice extra bit of range. Admittedly I have to keep saying that between the Convocation and Midnight Sons releases Mystic is becoming a less and less attractive attack type but this still is a great builder in my book.

This spender I’m a little less wowed on than others. Unlike some of the other pieces we’ve seen recently, Doctor Voodoo isn’t particularly mobile which means unless someone gets up in your face you probably won’t be using this as I’d pretty much always double tap with his builder than move->attack with his spender. There’s also no inbuilt rerolls in Jericho’s kit so in addition to being awkward to use it requires outside assistance to truly pop off with the Power Burn wild trigger. That said, do keep this attack in your mind for the cases where somebody gets up in your face because it does still pack a whallop.

Technically this is one of the last parts of his card but its important so I’m going to go over it first. At the bottom there’s a beast-esque passive giving power per skull rolled which helps as he’s going to be VERY power hungry. But more importantly it explains his core mechanic – a token representing his dead brother. It moves around from character to character based on stuff we’ll talk about next, and gives him +2 defense/dodge dice when Brother Daniel is on him rather than someone else. It also makes him immune to enemy Doctor Voodoo shenanigans which is neat. Make sure you understand EXACTLY how this works before running him because its key to his whole kit.

I’ll give you guys a bit to read this paragraph as it took me a couple takes to fully get. Pay X equal to threat to force someone to drop extracts at range 3 would already be a solid ability. But in addition it bans that character from interacting, holding or contesting either. If Voodoo is good at getting power (which having a sap builder implies) this is bonkers. Going late in the round and stealing extracts, making people worthless on the points they hold is going to be an absolute pain. Especially as outside of Black Order / Dormammu shells virtually everyone is swarming 2 and 3 threats right now meaning there are multiple targets to cycle this through. Imagine on SWORD Base you put his on someone round 1, so on round 2 during their activation they can’t flip any of the sword bases, then after they go you switch it to someone else, denying 2 characters the ability to help on scenario. Or you steal an extract with this then in the power phase you pull Brother Daniel back to you so you’re tanky enough to deal with the hate thats inevitably coming his way. This is absolutely a feast or famine superpower when it comes to power economy but its bonkers good if he gets loaded with power, and might even be enough to deter people from hitting him lest they fuel even more possession plays.

Relatively simple throw with some confusing wording layered on top. If you have Brother Daniel on you, you can throw size 3 terrain, but you can only ever throw size 2 characters. This is expensive and situational but if you’re flush with power after a daze I could totally see walking up to max 2, possessing to steal a token, throwing them away, then walking away to be an Enchantress-esque pop-off. A nice to have but not necessarily an everyday tool until your power economy is working right.

And last but not least for reactive superpowers we have Recall Spirit which I find very reminiscent of Vision’s phase shift ability. But instead of there having to choose a defense to boost, Doctor Voodoo just recalls his spirit for +2 across the board. Do note like Vision he can’t react to a throw with this either so players CAN get around this if sufficiently motivated and clever. Obviously there will be some tough decision points if Brother Daniel is possessing someone on a key point but usually the right call is to recall whenever you fear he might go down.

Finally, flight and two status immunities that are increasingly common with the last few waves. Nothing to write home about but nice to have all around.

Overall I’m pretty intrigued by this new addition. In some ways hes reminiscent of Enchantress/Miles, in others he looks like a reasonably tanky beater. My biggest question is how good is his power economy between the builder and the power/skull roll passive? Does he need more assistance or is that enough to fuel his possession shenanigans? If he’s self sufficient he’s a fun and interesting splash in a ton of places where you want a tankier extract thief in your Enchantress slot. If he needs help thats a trickier story altogether. I don’t think he’s particularly good at playing with Dormammu (or against for that matter, though his defenses at least make him a good tank into Daddy D?) or Brotherhood which are the two hottest power generation affiliations right now but perhaps he will make a spot in A-Force / Red Skull Cabal if people are feeling frisky. But like with every character we talk about here, the final verdict will be on the tabletop and I’m excited to give him a whirl!

Finally a shout-out to our partners who always have the most devilish deals on MCP online:

That will wrap us up for this First Impressions article here on acrossthebifrost.com, make sure to check out the Roster Doctor on Facebook, Youtube and Twitch!