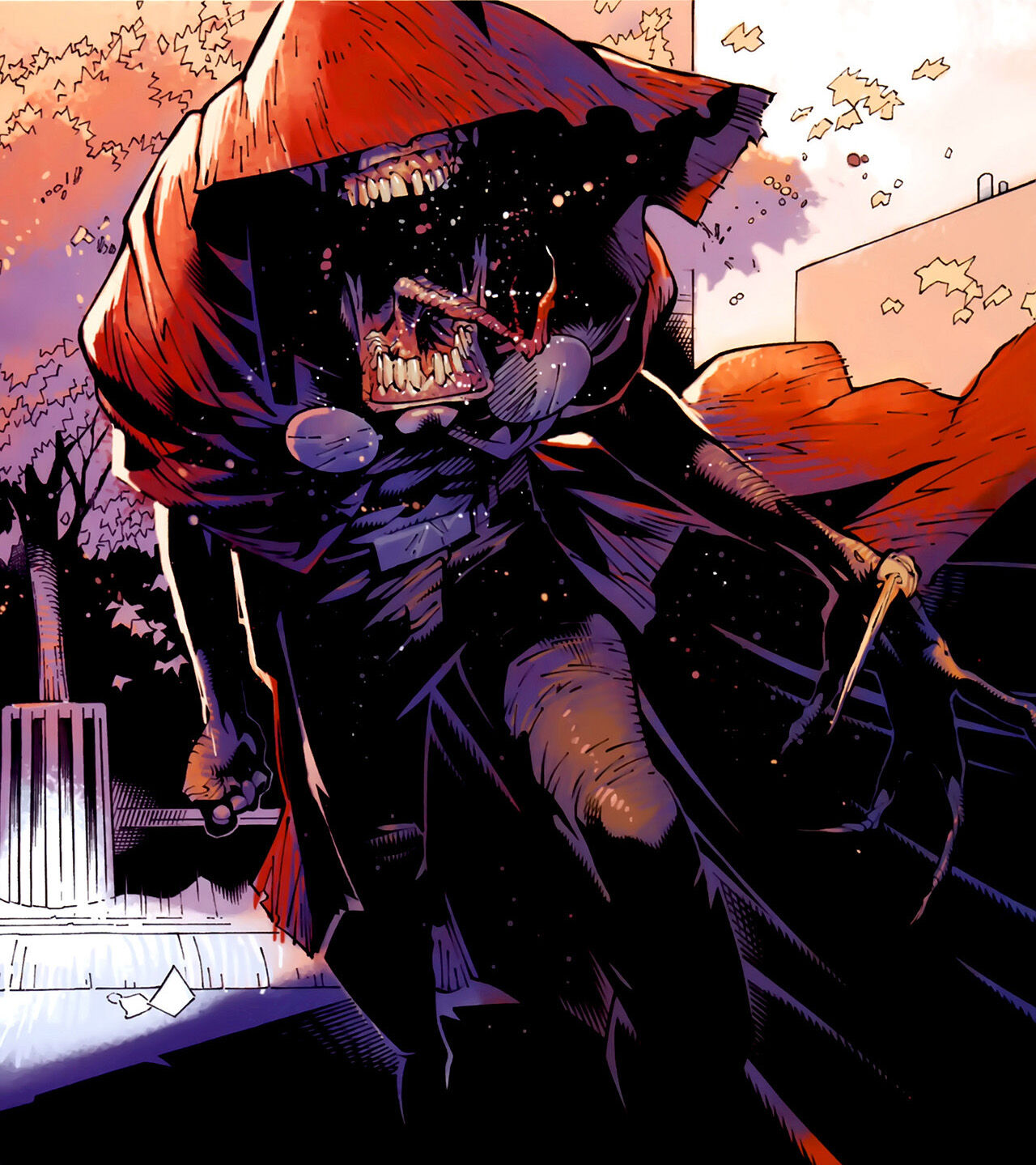 Another Tuesday, another First Impressions! This time: Hood!

A common street thug with magical vestments powered by Dormammu, Parker Robbins can transform into a Demon to fulfill all his poorly thought out schemes. And in a MCP first he has not one but TWO character cards! But do his cards impress? Lets dig in!

Starting with his normal card, the weird stats keep rolling and I’m here for it. 2/2/3 with otherwise standard stats for a 3 threat is not an ideal place to be, but it makes sense along the rest of his card and transform dichotomy so I’m more than fine to give it a pass. Be fully prepared for him to go pop randomly if you can’t pay to boost his defenses, though.

Oof. Mystic rapid fire? Sign me up! We’ve been talking about how much of a wildcard mystic attacks will be between all of these releases skewing heavily towards mystic defenses but this alone makes Hood AT THE MINIMUM a niche pick. Lets say you’re playing a rapid fire list into your opponents Sam Spam. Slot in this bad boy and cut right through Iron Fist and his buddies. That said always be wary with the “worse” rapid fires that require a hit to actually rapid fire because you can definitely low roll on him, especially with no attack roll manipulation.

This is the kind of spender I wanted to see on Storm. A simple no frills medium range spender with a chain lightning passive. I wish the arced characters got shocked too but even spreading the love a bit is nice in and of itself. Admittedly Parker seems pretty power hungry so I am unsure of how often you’ll be throwing this out but if you ever want to get your Palpatine impression on here’s your chance.

Heal 3 for 3 power and a bleed on the target seems like a super sweet deal, especially if you’re immune to Bleed or already bleeding for other reasons. That only costs one more than Medpack, a restricted card, and you can do this multiple times per game (or turn, the once per round limit is per character effected. Admittedly 3 power is a lot but I could easily see a consistent pattern of move->hex shot-> rapid fire (hopefully) -> Black Arts if you have a seriously hurt ally, hold for Invisibility Cloak if everyone is relatively healthful. This is especially funny in Asgard who can use Thor’s leadership to pay a power to get rid of the downside. Also as a final side note this has some cute synergy with Blade if you can set it up on an ally who will be near where Blade ends his activation, allowing you to recoup some of the energy cost onto an ally (and maybe even some extra healing!).

A inversion of Mysterio’s passive with a bit of an upside, Invisibility Cloak ensures that Hood is tanky as long as you have power. In addition to being able to use his better (slightly) dice pool vs physical, energy, and dodge rolls it also lets him count blanks against any damage roll in the game which means if power isn’t a consideration he’s one of the harder 3 threat characters to push damage through on.

Upon taking damage from an enemy effect, Parker transforms into his demonic form which we’ll be covering here in a second. Do note that its enemy effect only so you can’t No Matter the Cost or clip him with your own beam to catalyze this transformation (edit it seems you can but only if it’d daze him). But enough about the transformation passive lets dig into the transformed card itself!

An identical statline doesn’t exactly spell confidence about his tankiness but let me assure you now that the kit holistically takes that into account.

Now we’re talking! 6 dice builder is in the realm of 5 threat characters. The bleed is a nice little cherry on top. If you can trick your opponent into waking up his Demon form he’s going to cause a LOT of hurt.

Same as before but with some important tweaks. 2 bonus dice, double the arc damage, and it forces you back into your normal form upon completion. There are a LOT of upsides to being in Demon form but the healing utility of his Normal form means sometimes you want to force yourself back to humanity for better ranged/support options and this attack SLAPS regardless so I wouldn’t be surprised to see Empowered Dark Lightning going off 1-2 times a game regularly.

This is HUGE to making this kit come together. Switching from a dedicated range 3 fighter to a range 2 fighter with transform necessitates some kind of gap closer, and it turns out when you transform its because of damage which means in most cases you’ll have the power to immediately charge in and accept your new role in this form. Pair it with a strong for threat builder in this form and you become a nasty little wrecking ball.

Wowza, TWO flat damage reduction? Okay, that totally makes up for the 2/2/3 statline on this side. Basically only ever taking one damage because its incredibly hard for most low-medium threat characters being played right now to push through 4 damage on a normal target. Admittedly there will be the occasional spike but this form’s stamina bar will go a LOT longer than you think.

This is AFAIK the first purely negative passive on a character in the game? Downgrades your defenses on Mystic attacks and transforms you into the (arguably) less desirable form on damage. Some matchups he might as well not have this passive, other matchups you’ll struggle to ever keep him in his Demonic form as the Convocation / Midnight Sons flip him back and forth like a bored 5 year old with a light switch. An obviously fun/thematic ability but I am unsure of its implications for his strength but leaning towards this being a problem. Hood is consistently tankier and better at damage dealing in this form, and pretty much only wants to go back to normal to heal allies / when being a r3 attacker standing on a point is attractive. The players who will really make Hood shine will be very good at controlling the opponent’s ability to trigger this, that’s for sure.

All in all I am unsure of what to make of Hood’s two cards. Across both of them there’s a smattering of VERY powerful effects that will be useful in certain circumstances but the bigger question to me is WHO has control over when Hood transforms. If its the player with Hood consistently controlling when and how he changes forms I expect him to be a solid utility 3 threat who knows how to change gears into a blender. If the opponent is constantly toggling him on and off I expect him to come off as some kind of Cronenbergian joke. Is he attractive to splash? Sure, if you need a supportive 3 with healing tools. But otherwise I think he’s going to live as an affiliated role-player.

Finally a shout-out to our partners who always have the most demonic deals on MCP online:

That will wrap us up for this First Impressions article here on acrossthebifrost.com, make sure to check out the Roster Doctor on Facebook, Youtube and Twitch!