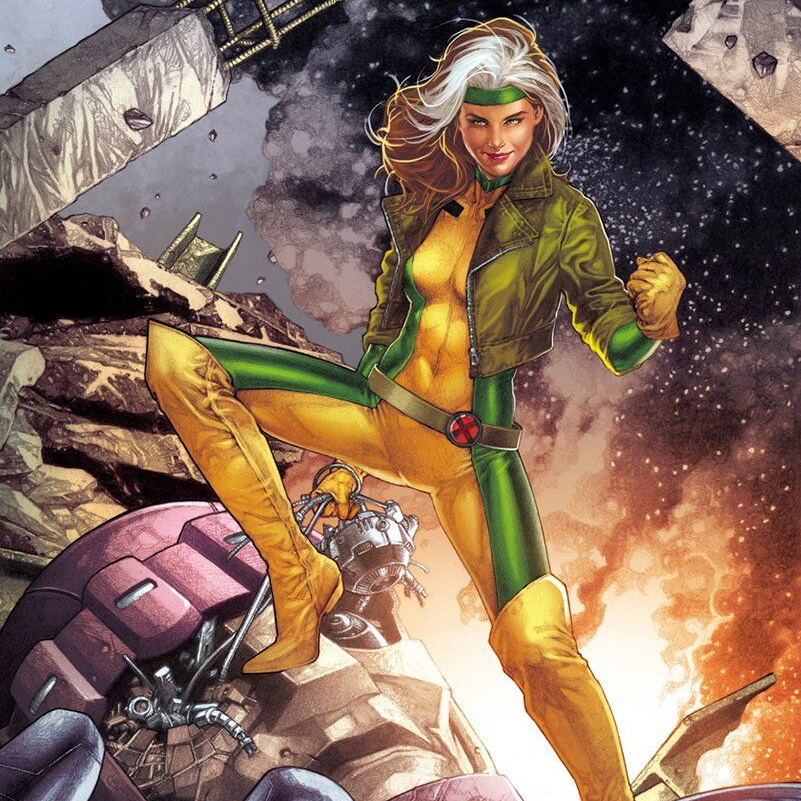 Another Saturday, another First Impressions! This time: Rogue!

If you missed any of our previous Ministravaganza coverage you can check out Ms. Marvel, Magik, and Hulkbuster at their respective links.

Fan favorite X-Men character, Rogue actually started out with the Brotherhood of Mutants. After a change of heart (and sides) she decided to use her power absorption for good rather than evil. And lets just get this straight off the bat – Rogue is GOOD. We don’t know what affiliations she will land in but she is an incredible 4 threat. But exactly how good of a 4 is she? Lets dive in!

4/3/3 spread and 6 stamina on both sides is a great place to be, especially for a 4 threat. She has other defensive tech on her card that takes this from solid to above average. Only the luckiest / most dedicated killers will actually burn her down in one activation, and if they fall short she has a ton of great ways to spend that power.

Is this the first short range Sap Power attack? Regardless, I’m here for it. Choosing between physical and energy at r2 rarely matters when most defensive tech that works on one defense works on both. But when it matters you’ll be glad to have it. And with a little luck you’ll be able to farm some non-tank enemies to fuel the rest of your kit (as appropriate Rogue is QUITE power hungry).

This pales a bit in comparison to 4 threat peer Kingpin’s spender Hail to the King, missing a stagger trigger and worse timing on the throw but to be quite honest Rogue is not Kingpin. Kingpin has massive issues with mobility and power economy, Rogue has neither of those issues. You’ll be making this attack a LOT more than Kingpin does his, unless your opponent is blindly obsessed with Kingpin and attacks him repeatedly to the point he’s full on power and doesn’t have to move to hit people. But I expect players to be throwing this out every turn or two with Rogue to devastating effect, causing tons of damage and displacing enemies off of points.

The glue that makes her kit all work. I’m sure when you read her attacks you were a little sus. Pure range 2? That means wack action economy, unless…

Charge is a tried and true staple and it works here as well as most other places. TBH thanks to her in-built sap on her builder Rogue is one of the most reliable charge characters from round 2 on. Sure she has to give up the “reliable charge” award to Valkyrie but its hard competing against an Asgardian in a “have 2 power at a moments notice” challenge. Expect to use this on her every round unless your opponent fails to displace her, and maybe even take Advanced R&D to fuel this out round 1. Move -> charge onto a point fishing for some Mutant Absorption or Marvelous Strength sounds like a dream.

Speaking of Marvelous Strength, how about a Size 4 terrain throw? Rogue isn’t quite doing an Angela impression here as she can’t teleport around her poor attack target grabbing the nastiest terrain elements around them, but with some smart positioning you’ll be able to do a reasonable approximation. Something I don’t think a lot of people respect with throws is its often worth treating like an “attack” and spending an action on moving into pickup range to throw a big piece. For reference, against most targets a size 4 piece of terrain will very reliably do 3+ damage. How many attacks do you do that RELIABLY do 3+ damage? Admittedly thats a bit of a hard sell when for an action and 3 power you can just do your spender which PROBABLY achieves a similar result? But don’t be afraid of going for the move -> throw if you’re outside of r2 of a key target and can’t charge / don’t want to gamble on generating power when a throw will almost guaranteed daze.

Oh man, the FLAVOR! One thing that AMG does head and shoulders above every other mini company out there is imbuing their rules with flavor. Each characters design is about enabling the fantasy of playing with that character and bringing them to life. If you gave this superpower by itself to someone as a spoiler before the ministravaganza, people would IMMEDIATELY say it was Rogue. That said, is it good?

I think the answer is yes. On average it’s a shorter range (but cheaper) Merc with a Mouth. But it can easily spike like crazy. And it does absolutely filthy things to a character with no power. In fact, I kinda want to run Rogue with Deadpool just to try and take away everyone’s power. Joking aside in terms of priority on spending power, I think it goes Southern Hospitality -> Marvelous Strength -> Mutant Absorption most of the time. But do realize that they each have their own unique situations where they’ll outshine the other two, so always be on the lookout for when a good Mutant Absorption would make you happier than throwing a big chunk of terrain or slapping your foes with a spender.

Flat damage reduction is such a house on this card. Between her solid defense dice and her reasonable stamina most 3s cant one round her no matter how much power they’re on. Most 4s struggle too. Sure Medusa can probably push you super far away but she’ll barely be doing a point every time. Its not been 24 hours since her release and I’ve seen multiple games of Rogue being obnoxiously tanky to the point of causing problems. Respect the Kree-Mutant Physiology! Oh and flight and poison immunity are nice bits too.

But thats not all we have to cover today, AMG was kind enough to show us a Rogue specific card from her upcoming box. I present: Pardon Me, Sugah:

I’m of two minds on this card. On one hand, I love the flavor. It’s full of texture and storytelling, about Rogue, her friends, her enemies, and how she uses her mutant abilities. It’s also a neat swiss army knife of cool effects. Its also free. But cutting the other way its short range – you have to be within two of your “victim”. It seems hard to use on your enemies models and questionable value to use on your allies. I think the most practical use of this is to get the dice boost from storm before charging off, while occasionally healing off of Wolverine (do note she only gets Healing Factor for the turn which means you’d be hard pressed to use X-Ceptional Healing on her with this) or getting up in an enemy Magneto’s face and draining him to deter any retaliation. Do note you can play this on dazed characters, ally or enemy.

All in all I think I’m in love. Personally I’ve been in a bit of a MCP rut where it feels like you’re trolling if you take anything other than Medusa/Enchantress as your 4 threat characters. But Rogue seems like an attractive alternative. I’m not saying she’s incredibly overtuned like the current deadly duo, but I think she is at a level where if I get to play her in-affiliation I don’t feel like I miss Medusa/Enchantress all that much. And going by her Mutant origins I’m guessing she will be at the forefront of an X-men renaissance. Aggressive, forward focused and tanky she will be a boon to any affiliation that she calls home, and might even be splashable in power boosting affiliations like A-Force and the Dark Dimension.