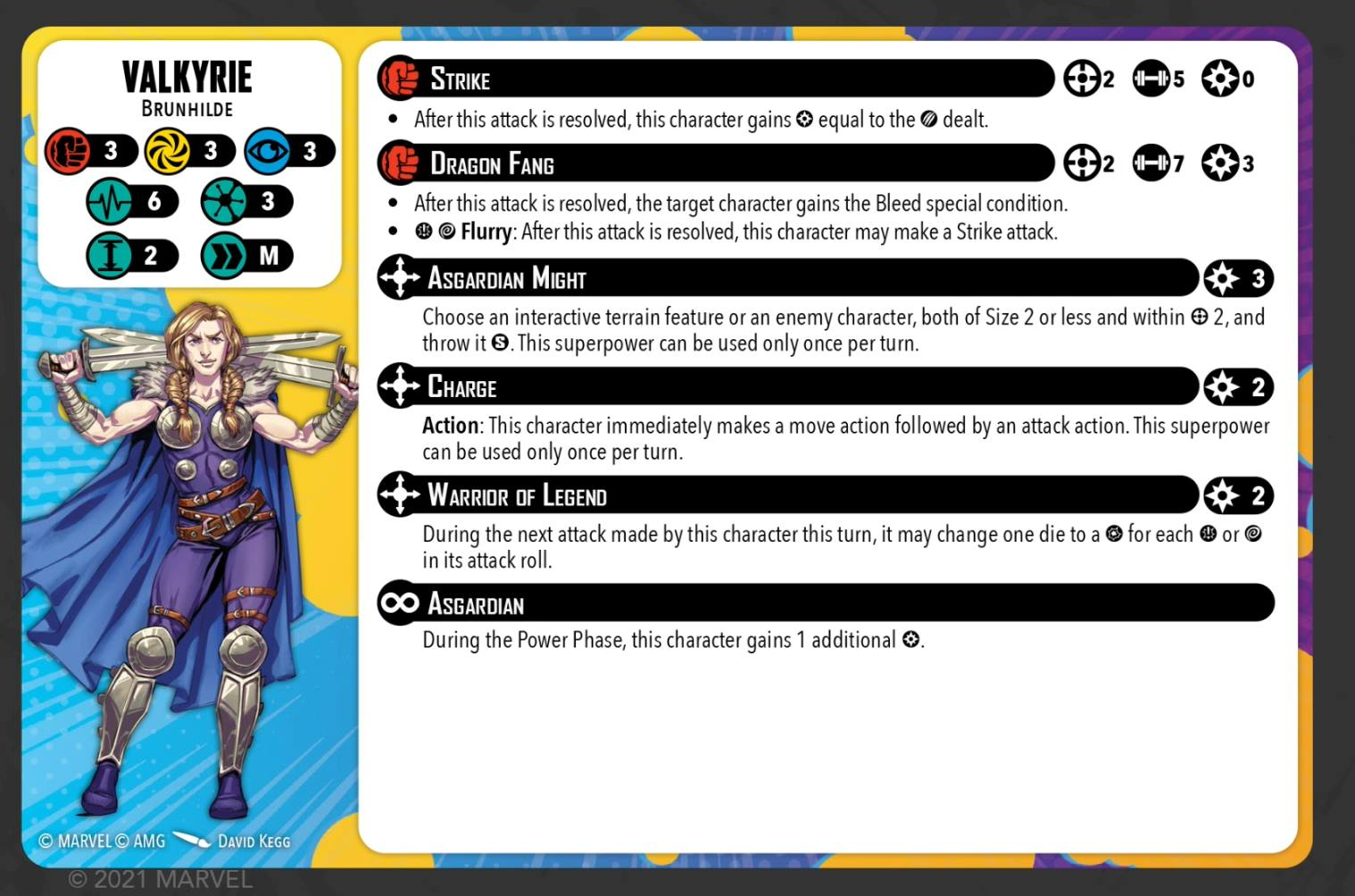 And just when I thought we were done with spoilers for the week! AMG was kind enough to give us an extra taste of whats to come with reworked Valkyrire, Enchantress, and Medusa. Those three ladies have been perennial out-of-affiliation top picks since their inception and they were some of the first characters that came to anyone’s mind when a balance pass was announced. Without further ado, lets dive into Valkyrie!

Valkyrie has been the go-to three threat since her inception due to excellent power economy, a character throw / charge package to go with that power economy, and Dragon Fang to facilitate some really nasty pop-off turns after getting loaded up on power. So, what nerfs are in store? Dragon Fang’s flurry trigger gets harder, and her throw costs 3 where once it cost 2. The Dragon Fang nerf is a nice touch but the big news here is the throw. No longer can she double move throw without outside power from a tactic or leadership ability, which was one of her most powerful openings. It also reduces her output on a high power turn a surprisingly large amount thanks to her desire to spend down for Warrior of Legend and Charge, sometimes that 1 power adds up. This is going to be a huge nerf to her splashability, but I still expect her to carry her weight in affiliated options like Asgard and A-Force. But as the title says, Brunhilde isn’t the only Asgardian who got a rework – next up, Enchantress.

Man did Enchantress piss off someone at AMG. Siren’s Call getting fixed to once per turn was expected after M.O.D.O.K. but they went in a bit extra and made Amora’s Kiss an action. All I can say is: THANK YOU. My only loss in season 6 stems from Enchantress move -> move -> Amora’s Kiss a hammer round one, it is so painful to deal with. In general if she can steal an extract, advance a couple potential attackers away and run for dear life she gives the Enchantress player a HUGE leg up. Both of these changes massively decrease Enchantress’ frankly ridiculous round 1 play patterns which will potentially knock her out of unaffiliated splash contention. If she can’t be so impactful early, her poor defenses once enemies start being able to afford to hit her will start to balance out the rest of her kit. Still a terrifying All You’ve Got option regardless though. And speaking of All You’ve Got abusers in the 4 threat slot our next card to discuss is (you guessed it) Medusa!

Medusa in the right hands has been an absolute nightmare thanks to the interactions between the push and flurry triggers in her Braid Bash builder. And to nobody’s surprise, they took a hatchet to it. Locking the push behind a wild trigger rather than damage is more of a sidegrade than an upgrade in terms of odds but the change to BEFORE damage is dealt on the push trigger makes it so you can no longer push buffer. Fans of not being pushed back into your own deployment zone after you activated round 1 unite! Flurry has also been given a worse trigger but crit+wild is probably less bad than it looks on paper. Still they managed to keep her concept intact without allowing her to ruin the game in the right hands, her control suite and Royal Decree will ensure that she’ll be exciting in A-Force and probably Inhumans still. Three for three, and TBH AMG has been hitting consistently so far.

One last tidbit from the chat for any Bullseye fans out there:

Overall I am super pleased with all the discussed reworks. Hulk IMO might be a BIT too strong, but every other change up or down that we’ve seen so far has hit the mark. The fact that AMG is taking the time to do such an extensive pass that is in line with the community’s experience is quite frankly a breath of fresh air compared to other game companies out there (cough cough). As frustrating as the All You’ve Got meta has become its been really comforting to see big and needed changes coming to meta problems and unloved characters alike.

A bit of news / bookkepping before I go, I’ll be attending the SoCal Open this weekend in sunny San Diego, California. If you’re attending make sure to say hi, and if you’re not expect a tournament report early next week. Until next time!