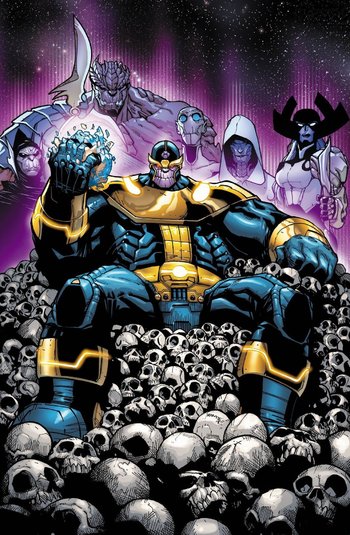 Another Tuesday, another First Impressions! This time we have a very special topic to cover: the Black Order rework!

Black Order have had an… interesting journey in the history of the game to say the least. First we only had Corvus Glaive and Proxima Midnight, only with the Time Gem so not exactly the power couple we know today. Then we got Black Dwarf and Ebony Maw along with the Space Gem, and while Mothership was a powerful card the conclusion was still that Black Order wasn’t up to snuff yet. Then, finally after a couple months of waiting we get Thanos alongside ALL the gems. All of a sudden people see the blender opportunity with Corvus + Reality, and husband + wife start seeing play all over the place (mostly Cabal). Pure Black Order takes a bit to coalesce as Thanos himself is a bit of an odd duck. Not quite the ranged turret of M.O.D.O.K. it’s hard to conceptualize a place for this tanky control 7+ threat, but eventually people get it. Mind Gem Thanos occasionally alongside Soul or Power comes into vogue alongside Reality Corvus + Proxima as a 15 threat core to build off of. At this point 14 threat is just a theoretical concept to most people and isn’t even considered for coverage. Then, everything changed with the Time Gem.

At 2 threat for a bonus action, the Time Gem was maligned for the longest time. According to lore gathered from those who remember, Time Reality Thanos was first attempted in a 100 dollar draft game where a meme started to look like the real deal (credit to Matt for being a madlad). It then first hit my radar after Lexa White did a Morlocks Episode on Time Gem Thanos. Admittedly I didn’t think much of it at the time as the episode was focused on an attrition gameplan revolving around Deaths Decree and using the Time Gem as a really expensive way to get in some extra attacks from Thanos. But I still think of that episode when I see Time Thanos again in the hands of Ulysses, Fingerguns, and UtilityCookie who went on to write The Thanos Thesis, arguably the most important piece of Black Order strategy writing in the history of the game. In it they outline how the extra MOVE action unlocks ways to break Panic Grips City as Evacuation Efforts Continue ala Hired Muscle. Which went on to show with deep runs at Nashcon but never taking the title.

Now where is the Black Order? Currently none are in the cut of the Season 6 league but that seems to be more of a “new shiny toy” thing as Cookie is in the cut this season playing Convocation and Ulysses took the season off. But for preparing for the cut myself / with numerous other people who ACTUALLY made the cut in my stead, there was a lot of fear of Black Order being a problem to solve in the top 16. Obnoxious scenario lines, 2 turn team to beat out all the 4-5 wide All You’ve Got teams to holding priority, and arguably the most annoying control suite of any affiliation right now just from Thanos with the Mind Gem by himself, they could have been a force to be reckoned with in the cut.

Looking to the future the Black Order has been in a bit of an interesting limbo state thanks to announced systemic changes. Namely gems no longer take up roster slots but your characters have to decide what gems, if any, they are holding at roster construction. While it reduces the flexibility of Black Order in some ways, it has been seen as potentially problematic without nerfs to Corvus/Thanos as it now means you can take the “perfect” Black Order trio in just 3 character slots and splash the goon squad wherever you want.

And that leads us all to today, where we finally see the full extent of the changes. First up: Corvus Glaive and Proxima Midnight:

The Death Blow Flurry nerf was somewhat expected after seeing the treatment Valkyrie and Medusa got, but the nerf to Husband of Proxima Midnight / Wife of Corvus Glaive is BIG. No longer free further taxes his ability to throw out Death Blows and Glaive’s Edge attacks, but even bigger is the range reduction. At range 3, you can no longer run Proxima to the midline round 1 and follow up with Corvus. Throws and pushes can also separate them to make their activations even more annoying. But enough about the nerfs we knew HAD to be coming lets talk about buffs, first with everyone’s favorite sassy Endgame villain, Ebony Maw:

Builder stronger? Check. Defensive tool changed from Magneto style to Enchantress style? Check. Better energy defenses? Check. Extra stamina on the injured side? Check. Cassandra Nova’s collision blocking superpower? Didn’t expect it, but check. Maw got improved across basically every conceivable angle and it shows. For those of you who don’t remember the early days when OG Maw got revealed people threw literal TANTRUMS on Facebook and Discord saying that he invalidated M.O.D.O.K.. Now with these buffs (and the M.O.D.O.K. nerfs) it might not be true still but Ebony Maw is finally a compelling choice. Another compelling choice with Ebony Maw? The Space Stone:

Space Gem goes from 2 threat to 1 threat. Space has largely been seen as the “joke” gem due to its high cost without a comparable payoff to the Time Gem. Now I feel that there are legitimate arguments for taking the Space Gem with both Ebony Maw and Loki. Do note you can move yourself with the Space Gem so it helps Maw attack twice consistently with his r4 builder no matter how much your enemies try to push you away / hide. Loki can now reposition displaced allies which can reduce reliance on Charge/For Asgard/Blades of Ichor. And perhaps even Thanos will find a use case for it eventually, placing an ally r2 twice for 2 power sounds potentially backbreaking. But to be honest, the Space Gem changes pale in comparison to the Time Gem’s complete rework:

No longer a bonus action, the Time Gem gets brought in line with the other gems at 1 threat and allows you to pay 2 for essentially Recalibration Matrix or the Eye of Agamotto. I am a HUGE fan. Less breakable but still compelling to add consistency to characters. Admittedly the 2 power cost is a bit daunting for non-Thanos characters but I think there might be a world where Time+Reality Thanos is an oppressive tank/beatstick combo thanks to stacking insane amounts of dice quality. But even if that happens, thats a massive step up from the old Time Gem which had a nasty tendency to break Extracts in a non-interactive way.

Where does this all leave Black Order? Obviously too early to tell as the changes were announced ~30 minutes ago as of writing this. But I have a few predictions:

And to be quite honest, I’m here for all these changes, less the splashability of Black Order. I’m really hoping it bears out in test that including the 3 character splash isn’t worth it. Black Order along with Gem changes is the number 1 thing I’m worried about going forwards into “new MCU” – thankfully the most problematic things got hit but I do NOT want to play a guessing game of whether my Sam Spam opponent will be playing Avengers or Black Order every game. But as with all the predictions in these First Impressions articles, only time will tell how these changes bear out. Personally I’m excited to hit the tables and see what new Ebony Maw is made of. Until next time!