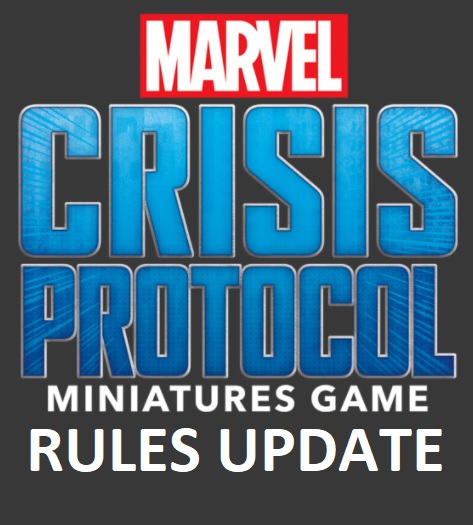 The long wait is over! The updates to the core rules, characters, and a few Team Tactic cards have finally arrived. Here are the changes, big and small, to help you get up to speed.

Updated Rosters: The alter ego rule has been modified. Previously, characters with the same alter ego could not be placed in the same roster. Now they can! Feel free to include both Peter Parkers in your rosters, but remember only one of them can be in your squad on the battlefield. Choose wisely. Note that each character can be in a roster only once—multiple Thanos’s (Thanii?) with different Infinity Gems are still not allowed.

Speaking of Infinity Gems, they no longer consume a roster slot! Players will now assign them to characters during roster creation and must use the assigned Infinity Gem(s) when adding the character to a squad. Finally, the number of Team Tactic cards that can be included in a roster has increased from 8 to 10.

Building a Mission: There are two changes here. First, the crisis selection process of draw two and pick one is gone. Now players will simply draw one of the three at random. The player without priority will then select the maximum threat value.

Character Cards: This section has been updated with the new formats of the character cards. If you have questions about the old versions of these cards, check out Appendix F.

Game mechanics: Step 3 of each phase has been rewritten to include all non-player effects including crisis effects and special conditions. The priority player will still select the order in which each effect will resolve and suffer the benefits and penalties of each effect first.

The big change to this section is regarding the timing of the Activated token’s placement. Instead of gaining it after the activating character has performed its second action, the Activated token will be gained at the end of the activation, at which point the player’s turn also ends. This will usually prevent a player from using a special rule to remove an Activated token from the character that just activated with cards like Difficult to Please or Cosmic Invigoration.

Beam and Area Attacks: These types of attacks received one small change. The word “other” was added to the beginning of one sentence. Previously these attacks, as written, would deal damage to the attacker because it is in contact with the template. I don’t know if any players ever saw this—though a few questions got close to it. I’m happy to see it fixed.

Knockouts: This is a small, but important, addition to clarify one aspect of KO resolution. When a character is KO’d, all effects on it expire before the character is removed from the battlefield. This includes special conditions and the effects of Team Tactic cards like Blind Obsession. Cards like Dark Restoration and The Age of Ultron should be easier to resolve now.

Appendix A: A new set of rules were added to the beginning of this section to clarify how to resolve simultaneous effects between players. Previously, effects that did not have explicit timing would resolve in priority player order whenever they happened. Now there are three ways this can resolve depending on when the conflicting effects occur; this might look more complicated, but it is more intuitive in the uncommon scenarios where these rules are relevant.

Remember, these new rules apply only when there is a question of timing that is not covered by the existing rules.

That covers all the major changes in the core rules. Astute readers may find other changes that are minor clarifications intended to make the rules easier to understand, not to change the game.

You can find the new core rulebook HERE.

The updated character cards, including Okoye and Winter Soldier, are HERE. Note that Hulk and Ultron changed after being previewed earlier.

Finally, a few Team Tactic cards have been changed to make them more appealing and a few others have had their power level reduced which may eliminate some first turn plays. They can be found HERE.