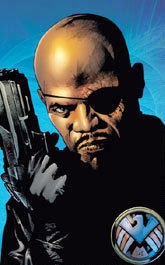 Another Monday, another First Impressions, this time: Nick Fury Jr!

Nicholas Fury Jr AKA “Sam Jackson Fury” as people loved to call him in the early days has been a fan favorite since his mind blowing reveal at the end of Iron Man 1 opening up the entire MCU. He assembled the Avengers, stopped Hydra’s takeover of SHIELD, and is currently vacationing in space with the Skrulls presumably setting up SWORD for another MCU jaunt. As a fellow Jr (technically the II but going by naming rules I should have been a Jr), this holds a special place in my heart. But enough about me lets first dig in with his basic stats:

Quite frankly he’s a lot tankier than I expected. 4/3/4 and 11 stamina for a regular human whose superpower is logistics and human resources is a hell of a deal. Sure he’s no Lizard but he’ll take hits a fair sight better than you expect.

For his builder we get an interesting puzzle. 5 dice range 3 pierce SLAPS but flat power generation isn’t necessarily what we want on an attack that hits so hard. At least it guarantees power when contributing from a point?

Next up we have his OTHER builder which hits just as hard but gains wild bleed and power per damage at the cost of 3 inches of range. Your Fury Special will always be your go to but if your opponents let you get up close and personal you absolutely won’t mind whipping out your bowie.

And finally we come to his spender. A bit hard to talk about without talking about the SHIELD Agents so I’ll leave their Pistol attack here for consideration:

So you’re getting a 7 die followed by a 4 die, and a reposition on your SHIELD Agents for 3 power. With all of Fury’s power generation seems like a pretty solid deal, especially if you can use it to get your agents out of danger – a free move is a free move. But attacks do not a leader make. Bring on the leadership!

Holy moly. VPs if you’re behind, aggressive for a power when not is a hell of a combo. This is especially scary going from the logic of the livestream where they were hinting at how grunts worked and implied Thanos’ VP for KO works on them, opponents should be very careful hitting SHIELD agents.

Personally I LOVE this as a crisis focused team leadership. Try and get a tied / slightly behind stance early to make your opponent nervous about dazing you and engineer an overtake around round 3 and ride it out with aggressive to stick to the secures you need. Thematic, game-changing AND powerful!

Consummately focused on the big picture, SHIELD agents are here to grab extracts and not much else. Poor combat stats and being unable to contest secures narrow their focus but with Buy You Time you’re guaranteed to be happy with the agents picking up extracts for you.

And finally a cool passive to help the SHIELD agents feel like an extension of Fury, rerolls when close and Fury gets power when his subordinates are hurt by the enemy team. All in all just a bit of a grease for the Nick Fury shaped wheel to get rolling.

Overall I am quite pleased with Fury. His leadership and grunts alone bring a heretofore unique playstyle to the table. According to his product listing he comes with TEN FREAKING TACTICS CARDS so I’m holding judgment on his meta relevance until we see those as affiliated tactics are often more impactful than a leadership in building an affiliation. But even without the full support of the rest of his box Fury is making one hell of an impression.

As we don’t have the list of SHIELD affiliated characters yet I’m going to hold off on supposing who will be in or not (except of course Black Widow Agent of S.H.I.E.L.D. who LITERALLY has it in the name), and focus on where Fury could see play splashed. Admittedly the 4 threat splash slot is highly contested against options like Doctor Voodoo, Vision, Black Panther, and Rogue right now but the extract focus intrigues me. Depending on how grunts work with Cable’s X-Force Leadership, a grunt double pistol activation into a Fury Special into a Lead From the Front could dish out a LOT of damage from a surprisingly long way away. But with all first impressions I eagerly await some table time to get a handle on the latest and greatest of Marvel: Crisis Protocol.