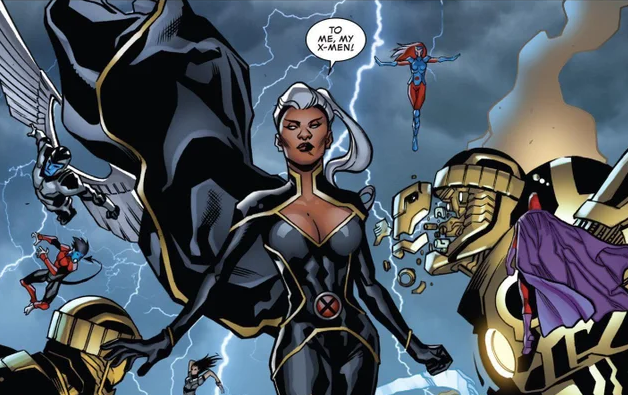 The more that I play X-men, the more I love both building teams for them and how they play on the table. There is really subtle decision making every step of the way. Which is what has led me to starting this article series. My goal is to catalog my journey through experimenting with X-men rosters and share it all with the community.

I was excited about X-men as soon as I read Storm’s leadership. My primary opponent was immediately in love with Magneto so I was ready to jump into the uncanny. I recorded two games with X-men the day after they were released. I have also argued they have always been better than they have been credited with. I think it is fair to say that I have always liked them but as content creator I endeavor to try every affiliation so I can speak from a place of experience. Now I am hearing the call. Every game I am enjoying them more and more. It really feels like they have an intriguing mix of tools and I think I am hooked. It’s time to answer…To me, my Xmen.

I think the most important question when picking an affiliation to focus on is the why. For some people they may just love the characters. And deep down, this may be the reason. I watched the cartoons as a kid and they have a special place in my heart. But I also love most of the Marvel characters and could easily enjoy most of the affiliations. This tends to mean that the play style and options within any given affiliation are deal breakers for me. This leaves me with the question…What is the unique appeal of X-men?

The first thing that caught my eye about X-men was that the initial four characters all had a way to displace opponents. They don’t have web-line or strongest avenger but any displacement is welcome. It isn’t enough to form an entire plan around or answer my core question. I just wanted to state it because it is important.

I will admit that I was disappointed when I looked through the tactics cards for X-men. I really thought they would get something like Wakanda Forever. Obviously that did not happen. But the more I play X-men, the more I am finding First class to be their best card.

The first and easiest use for this card is that playing it means you can pick up objectives for free with your X-men. That may not seem like much, but Rogue being able to grab a Hammer for free and have 2 power for Charge starting Round Two is quite strong. This also applies to beast having 2 for his throw or Domino still have power to manipulate probabilities.

If you play on something like Extremis Console and Researcher, you might bring the card and save it for a key round where lots of X-men want to interact for a heal but this may also be a time you leave the card on the bench.

The most significant use is with the “Pay to Flip” secures. Deadly Meteors, Spider Portals, SWORD Base and Mutant Madman. If you aren’t familiar with these Crisis Cards, they require interaction and a defense roll to take control of them. When playing in these situations, you can leverage an X-men advantage by getting the free interacts on the secures and leading to your opponents struggling with power economics while you have exactly what you need.

I wanted to test them even before Rogue, Gambit, and the rest of the new releases hit the shelves. I threw together a roster and went to Mox Boarding House in Bellevue to get in some games. One of my common teams ended up being…Storm (3), Domino (3), Jean (5), Lizard (3) and Ms. Marvel (3) at 17 threat. I played this on Deadly Meteors and I was surprised how strong it felt. And I am not even sure I want Deadly Meteors in my roster.

This was the game that made me feel like there was potential to explore. I had 3 characters with 4 energy defense combined with lots of ways to move my opponent off the secures. I also had a nice variety of attack types to keep my opponent in check.

While I enjoyed the team, I still had concerns about Storm’s survivability in the middle of the table and how useful would Jean be across a variety of Match-ups. She did get use Mental Domination to make Deadpool KO his own Leader, Captain America.

This definitely put Jean back on my radar and I hit the dojo like it was the Danger Room. From there I let myself start building teams with X-23, Honey Badger, Rogue and Gambit to see what they would bring to my plans.

In the next article I will start going over what I am playing now, what I am finding critical to my rosters and how they games are going. So until next time…The most OP thing you can do is to Daze Magneto with Storm’s throw and then her spender to guarantee the 2 damage you need.