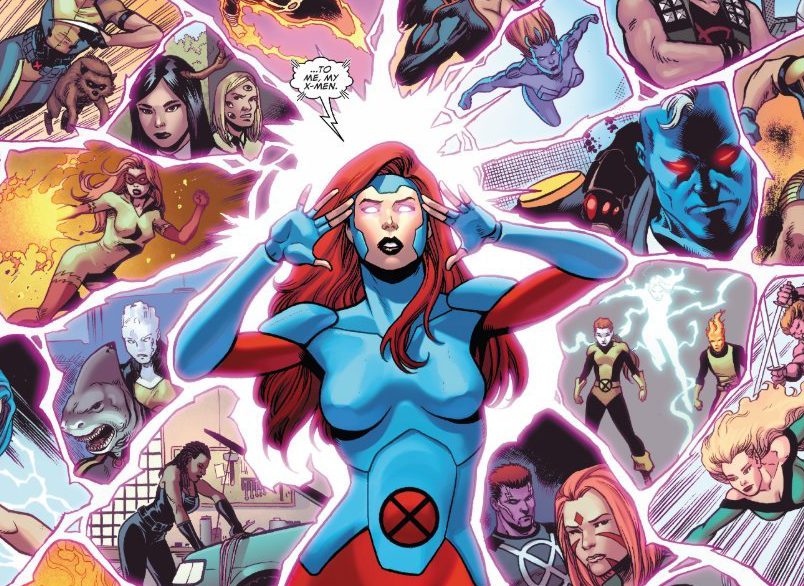 Welcome Back for another episode of Mutant Mayhem. As I said in the first article, I am just really enjoying the affiliation and I felt like it would be helpful to share my experiments with the community.

In this entry I will be focusing on the building blocks for the roster that I am using most. Specifically I want to talk about the key characters and my most commonly used cards. There are spots that are still wide open for me, but I will get to those in Part 3.

Storm, Domino and Rogue are the key players for me. They see the most play and I am generally very happy when the team starts with these 3. Sometimes the math says otherwise but that is just MCP Life. If you are looking to get the most out of X-men, I would practice with these three characters until you get a strong grasp of when they excel and when there may be better options.

Storm: She is obviously a lynch pin because of how much we get from the leadership. But do not sleep on her kit. She has a range 3 throw, the ability to shock enemies and can spend her power very effectively if your opponent tries to take her out…which they will. She is fairly fragile, especially to up close and personal attacks. There is value in working in another affiliation for when Storm’s lack of resilience hurts too much. Unfortunately Cyclops doesn’t bring a good leadership, so when I play X-men it is always under Storm. Scott does occasionally make my rosters because I like his kit, but I can’t stress enough that Storm leads the X-men.

Domino: I was not initially on this train. Merzain praised her to me time and time again. I finally really focused on getting her into teams and she has been an absolute work horse. Her probability manipulation allows her to survive situations that you wouldn’t expect her to and take down threats that seem beyond her ability. It also lets you spend power before Sap Power resolves, so you can deny power to you opponent. She is only 3 threat which allows for a lot of team flexibility. She isn’t so expensive you hate having her hold a point but she is threatening enough that most characters do not want to just run up to her.

Rogue: She is possibly the best reason to play X-men beyond the leadership. Rogue is very durable and has a crazy suite of attacks and powers. Mutant Absorption can be used offensively for damage or defensively to remove their power. Her spender can throw size 4 characters and she has a builder that can be multiple damage types. Rogue is straight up amazing. There are times that I am activating Rogue and it just seems like her turn never ends.

Dr. Strange: There really isn’t a better unaffiliated character for X-men. His 50mm base has a ton of synergy with the leadership’s place effect, which can also allow him to cross the table round one if needed or double attack and still be on secures. The cover from Storm allows him to modify a die to a block which means that he gets a power whenever he is attacked. Strange also bring additional defensive tech to a team that wants to keep it’s characters up as long as possible. He has consistent damage output but also brings displacement that can go any direction. He really plays into a versatile X-men strategy. I could go on, but just play Dr. Strange.

Black Panther: One thing that X-men lack is a long mover and Panther fits this role like the king that he is. The leadership helps him against his Mystic Weakness. He is also a very consistent character which is really something any team is happy to have. Panther can rotate between extract carrier, running to flip secures or using mantle to take down characters. He just performs so many tasks that he keeps your options open every round.

Doctor Voodoo: This character is one of, if not the best characters in the game right now. He loves the leadership as it helps him get off two attacks or at least waste less actions on movement. He is another 50mm base which the team loves. He also rounds out the attack types for the team. Possession is great if not incredible. Having a way to force people to drop extracts, or deny securing points is huge. He even has a throw to top it all off. But saying Voodoo is worth including shouldn’t surprise anyone. Just play him.

I am sure there will be some readers that dislike one or many of my character preferences and I expect that. X-men is an extremely flexible affiliation. My goal with this entry in the series was to highlight the core characters that have made me feel like X-men can really hold their own. If you want to give them a run yourself, feel free to try this core team and see what you think. I would love to hear how it goes for you.

Rounding out the Roster

After those 6 slots there are honestly so many different characters you could reach for. I could probably make a list with 30 entries without much effort. And I think this is one of my favorite aspects of X-men. The roster has tons of room for flavor and variance. It is incredibly easy for players to put their own spin on it. My next article is going to focus on the characters highest on my list to fill out these last 4 spots.

Until next time, the most OP thing you can do is use Storm’s Leadership to teleport Dr. Strange forward an immediately push two enemies off the Researcher.

HPP 097 – Black Swan Sings Her Song and Everything Dies

How Line of Sight Works in MCP

Across the Bifrost Ep 130 Diamonds in the Rough