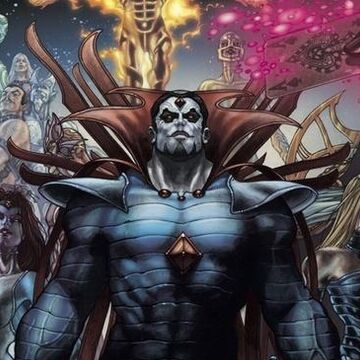 Imagine my surprise when I woke this morning to find Mister Sinister on my feed:

We already knew bits and pieces from the Panel to Play and the stream game but now we can dive in to the final product. Does Nathaniel Essex’s card live up to his mini? Let’s find out.

Starting off with the defenses, we get a pretty standard array. 11 stamina with 6 on the front side and medium move are pretty vanilla, with size 3 and 4 mystic defense to french it up. In conjunction with some of his defensive tools (more on that as we go through here), I’d say this is a reasonable starting point with no obvious flaws. He does also seem to be on a medium base so that gives him a mobility edge to reach enemy B/F points in a pinch round 1.

Ah, the humble Strike. Except this strike ain’t so humble. Energy typed and r3? Sign me up! Energy might not be MASSIVELY better than physical with all the vibranium, spider senses, and martial artists running around in this game (how does being a martial artist make you better at blocking energy blasts?) but it’s not nothing, with a large number of characters who get one less dice than they would normally get into physical. And with his medium base and r3, he can threaten a sizeable area while still being relevant on a point. Thankfully Mister Sinister doesn’t seem INCREDIBLY power hungry with his kit so you won’t be living or dying on hitting big, but keep in mind that this ain’t no Psyonic Blast.

Speaking of Psyonic Blast, hubba hubba! Outside of the power that he naturally generates, this is essentially a FAR superior version to Vision’s Solar Energy beam. In the last attack we spent a while talking about all the weirdos in this game who don’t particularly have a hard time defending against energy, well there aren’t that many weirdos out there who are specifically good against Mystic. This is the kind of attack that can double tap Black Panther down with just a bit of reroll support. On top of that is the Genetic Extraction ability which gives you Genetic Sample tokens. If you haven’t read through the entire card yet and don’t have the gist, Genetic Sample tokens are used in virtually every one of his superpowers alongside his ultimate to do cool stuff – essentially an alternate resource minigame in his kit to manage. Collecting two with a beam will feel great, and with B4 it’s hard to find two characters that AREN’T lined up. In a lot of ways I expect this attack to be your bread and butter with Mr. Essex. The power cost is a bit annoying but in teams that can funnel him power like Brotherhood or Cabal, with the low expenditures of the rest of the kit he’ll be double tapping with this like a maniac.

I’m going to be real with you guys, I don’t know whether this is a trap or not. 6 power is a lot but if you have full samples its a 6 dice a3 with essentially the explosive wild trigger on crack if you can manage a crit wild hit combo. This will absolutely blender enemies on a tight setup like Gamma or Mayor Fisk. If you’re flush on power and have full samples go wild, but I don’t think that this is worth tying yourself in knots trying to get work. Also remember in case you assumed otherwise, this only checks how many samples you have, it doesn’t cost any. Additionally we’ll get into this next with the bevy of superpowers that cost Samples, but if you only need an A2 or an A1 to avoid hitting some friendlies while still bringing the pain too your key targets, you can actually tactically spend your tokens to modify the shape which is neat (but requires your opponent to do stuff to you or for you to have even more than 6 power, so YMMV).

Moving on to an ability that DOES cost Genetic Samples, Engineered Perfection is the perfect status cleanse. For the low low cost of one Genetic Sample token (which might not be that low of a cost depending on how bad you’re itching to unleash some Recombinant Disintegration) you can drop ANY status. And as I’ve been playing a LOT of Asgard for Season 5 prep I can attest to how good status removal is right now. Lots of shock, incinerate, stun and stagger you don’t want to deal with, and having a tool to remove it if the price is attractive enough will always be welcome.

Another Genetic Sample spender, Genetic Negation allows you to pass out Root. Root for those of you who haven’t played a ton with Groot (RIP Guardians, I hope you get your day in the sun again soon), is a status effect that increases the cost of your superpowers by 1 much like Loki. Its a solid and annoying status to hand off, especially into teams that don’t have a good way of clearing statuses. Until I have enough table time to understand the economy of Genetic Sample tokens I can’t be sure but it seems like this is going to be one of your main outlets for it, especially if you don’t feel threatened by enemies.

Ooh another bow effect! And thankfully it doesn’t cost Genetic Samples! Unfortunately it’s once/turn not once/character/turn, but that almost assuredly would have been a bit much without any other super compelling places to spend power each turn. There isn’t much that hasn’t already been said about the virtues of enemy advance effects, but in conjunction with handing out Root you can tilt people pretty badly by absolutely wrecking their character for a round.

The final active/reactive power on the card and another Genetic Sample Spender, Molecular Regeneration allows you to block UP TO 3 damage in a single attack with Genetic Samples. At first this might not look so crazy but being able to block a variable amount of damage reactively is huge. You can let damage through you don’t care about and with full genetic samples even on 1 health you effectively have 4. If you’re too the gills with Samples, enemies not confident in their ability to punch through might not even bother attacking (I’m looking at you, Medusa) and stretch his survivability even further and deflect attacks that hinge on super powerful on damage triggers. Good players will be separated from the great on both sides by how you use Molecular Regeneration and your opponent plays around it.

The least exciting end bit of the card, but Flight is nice to have even on a size 3 mook, and a cap on Genetic Sample tokens is necessary considering how easy it’ll be to get 2-4 in an activation.

Ultimately I’m pretty excited by Mister Sinister. He’s got a really funky kit which has a lot of cool unique decision points. In addition to that he’s a solid midrange beater who can fight incredibly well at r3/r4, dishing out damage while picking up samples to limit your opponent’s ability to deal with him. In some ways he’s reminiscent of Hela who can dish out a lot of mystic damage and is surprisingly tanky, and like her I’m still a little concerned about the power economy. His most attractive attack is a spender not a builder and while that’s not the end of the world when his most important superpowers are free, it does mean you need to go into every game with him knowing exactly what his power economy will be like to ensure you don’t run out of gas. Hopefully we’ll see his affiliations soon so we can get a better idea of where he might best fit.

Finally a shout-out to our (not) sinister sponsors who both happen to have preorders up for Mr Essex:

HPP069 – Every Little Thing She Does is Magik!

A Glossary of MCP Slang