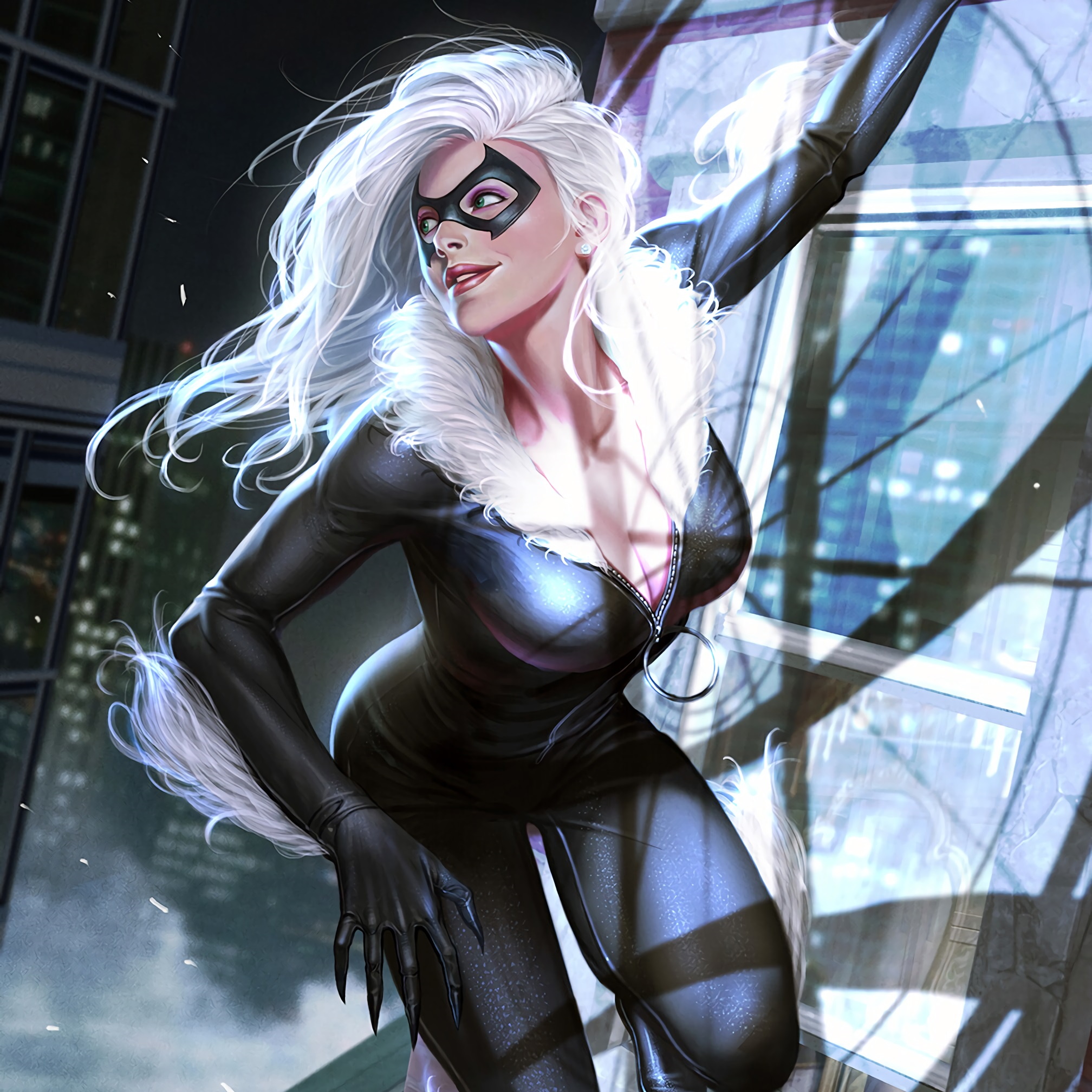 Another Monday, another First Impressions! This time we’re taking a look at the bottom billing of the Amazing Spider-Man box, Felicia Hardy aka Black Cat! This totally-not-a-catwoman-ripoff has been a mainstay frenemy and occasional love interest of everyone’s favorite webhead for over 40 years.

Without any further ado, let’s dig in!

Relatively standard stat array for a 3 threat character, with the nice bonus of long move (more on that later on here) in exchange for only having 10 stamina. Identical to Quicksilver in configuration at the top here, does the rest of her kit match up to Pietro?

An… okay builder, this isn’t going to be anything to write home about. Pierce can make for some solid spikes, but as we get further down the card we’re going to see more and more cool ways to spend power on her, and this is not a good way to get power onto her. With its spike potential I’m not AS angry as I normally am seeing 4 dice power per damage builders, but this is definitely another case where if this generated a flat power I might have been a bit happier.

On to her spender, just… wow. Guaranteed stagger on a 2 cost r3 attack is bonkers. Sure it’s capped at 1 damage but if you’re just trying to mess with your opponent’s action economy this is solid gold. Still, between Felicia’s anemic builder and great defensive tools, its going to be hard for her to reliably have power to do this every round, much less the dream of doing this to two targets in a single activation. Which is probably for the best because her double tapping this is the action economy equivalent of dazing someone or popping off with Strange’s Crimson Bands of Cyttorak. Doing it once even helps set you up for the 2nd one with the wild elusive triggers, allowing you to dance across the board staggering targets while keeping safe. I expect a decent amount of effort is going to be put into finding ways to get her 3 power/round to allow her to live the dream – Brotherhood, Inhumans and A-Force all seem like likely candidates.

Oh neat! Another allusion to Quicksilver (though obviously less impressive), 2 power allows her to interact with midline objectives with just a single action. Probably not worth as much effort to get working as Quicksilver’s as a Long move is far superior to a r2 place, and she’ll often struggle to find power to do this when Troublemaker is likely to give a short advance for the same cost (though costs an action so this will come through on repositioning or starting a Troublemaker chain).

Ooh baby. What we’ve all been waiting for, another extract theft ability. The meta has become increasingly extract focused, so having a more diverse array of tools to do the job of achieving parity (especially on a Long moving body to hunt your extractors) is nice. Also her Grappling hook works as a nice inversion of Enchantress’s bow, positioning Felicia closer to the target rather than luring them in. That said, she still has her power economy issues so sourcing 3 power (and potentially 2 more for the grappling hook) is going to be a pain (and probably a large focus for what affiliations she gets splashed into).

And finally we come to the bottom of her card where her defensive passives shine. Blocking rerolls + corner case dice modification like Warrior of Legend is a BIG defensive tool that against the right target can be worth more than Martial Artist. And Stealth is the classic defensive tool for limiting threats onto your character, this time of the nice bonus of playing VERY nicely with Elusive on her spender. Hit from max r3, move short away, your staggered target physically can’t attack her this round. Seems good!

Overall I’m intrigued by Black Cat. In some ways she reminds me of a lot of 4 threat characters – the ones with a ton of cool stuff to do with their power but a hard time generating enough. As she’s a 3 threat which must essentially be worse than a 4, she maintains the cool upside if she has a ton of power but her builder is SUPER bad essentially guaranteeing her power economy issues. I mentioned Brotherhood, A-Force, Inhumans as all likely candidates for her to get power funneled into her (A-Force actually being an affiliation she’s in), but perhaps theres another control shell like Wakanda that can get her self sufficient with Shuri rerolls to spike a builder once or twice and loves the stagger spam. One things for sure, Season 5.5 is going to be exciting with her around!

Finally a shout-out to our partners with nearly CRIMINALLY good prices where you can purchase Amazing Spider-Man and Black Cat: