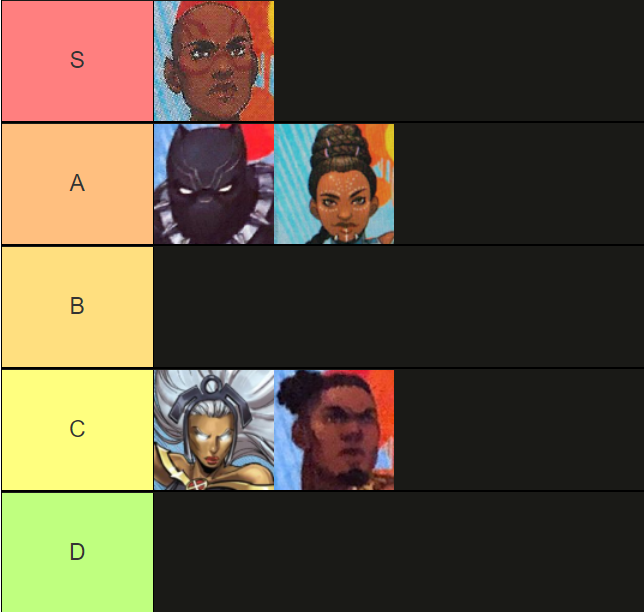 Another Tuesday, another tier list! Now, I know what you’re thinking – Inhumans straight to Wakanda? What happened to Spider-Foes? Well to be honest, with the latest reveals being a couple days old and 2 more Spider-Foes on the horizon, I decided to hold off on doing the rankings until everything is released and we have a better picture of how they play. If you want to read my thoughts on the latest releases you can check them out here:

But today we’re going to focus on humble Wakanda. A mere 5 characters, but one of the most relevant affiliations in the game. The mere inclusion of Black Panther, Shuri, and Okoye along with Wakanda Forever can turn a plain single-affiliation roster into a dual affiliation roster that fully supports Wakanda Wave in some format.

For those of you not familiar with Wakanda Wave, it’s a control oriented strategy where you use the automatic push effects on BP and Shuri along with Wakanda Forever:

to ensure full control of secures after your opponent has moved but before scoring to get you big scenario leads. In fact, the strategy is so potent that both players in the finals of the TTS League Season 4 played Wakanda in the final. But enough about why Wakanda is awesome, you came here to see a tier list!

– All rankings are based on playing these characters in the given affiliation. They might shine elsewhere but we’re focusing on in the context of Wakanda rosters here (although splash options for roster building will be taken into account)
– Leadership abilities are not factored in to a leader’s evaluation unless a faction has multiple leaders
– Gems won’t be ranked on their own merits they’ll be folded into their affiliated user’s ranking (obviously excluding Black Order).

Okoye – S – I really slept on Okoye for so long, to be honest. I always understood she was good, but not quite as good as she’s turned out to be. She’s incredibly tanky for a 2 threat character even just off her defensive reroll, but gets borderline impossible to reliably take out if you have to get into Martial Artist range. She’s relevant in both melee and ranged thanks to her spear throw (and again those surprisingly nifty rerolls), and can even dish out some serious pain thanks to the flurry trigger on her spender. She always takes more effort to deal with than you’d like, and often punches above her weight class. As a final cherry on top she has Bodyguard, which combined with her extreme tankiness and limited other ways to spend power in her kit makes her the best 2 threat in the game. Her only competition is Toad, whose raw utility is sometime a godsend, but in terms of work doing Okoye is the pick.

As for other affiliation bridging, Okoye is a oft-used member of A-Force, but she kinda just goes everywhere. Turns out, 2s are REALLY valuable for teambuilding and being the best 2 threat in the game, pretty much every affiliation welcomes her. I’ve run her in Avengers, Asgard, Cabal, Syndicate, hell even Web Warriors! She should probably be in your roster even if you aren’t Wakanda.

Black Panther – A – The king of Wakanda obviously shines in a Wakanda team. Tanky, mobile, and a movement trick that doesn’t require an action – he has it all. Some people might struggle with T’Challa because of the mandatory pushes on all of his attacks, but while it is sometimes hard to orchestrate a double attack with him without some helpful terrain you can use it to your advantage. As mentioned above, Wakanda excels at displacing enemies off of secures. Which often means they need to spend actions getting back on secures. Which means they often only get one attack into Black Panther. Which means he often takes very little damage unless there’s a Mystic attacker on the other side. His incredible speed with a long move and pounce means he can get from secure to secure in a pinch, and on Gamma (Wakanda’s favorite secure) he is constantly threatening to go onto the enemy shelter and knock people off scoring you 3.

As for other affiliation splashes, his only other affiliation is Avengers which he does play quite well in. Being able to pounce round 1 without asssistance gets him onto the midline while still allowing him to attack once, ensuring you win a flank D secure if they send only one character. Not the wildest upgrade with the Avengers discount, but surprisingly helpful at securing a round 1 advantage. I’ve also seen him being taken as out of affiliation splashes in Web Warriors and other places that are more control focused, but he definitely is by far the most at home in Wakanda.

Shuri – A – If you had asked me 6-8 months ago to make this tier list, Shuri and Okoye would probably be swapped. But back then in the dark ages of the first year of MCP, extract play wasn’t really a thing. No Hired Muscle, no Angela, Web Warriors just barely getting started. The only big Extract plays that existed at the time were Defenders plays with Pentagram, but that was kinda under the radar. So pretty much everyone was playing a secure focused game, either an E force if you thought you were better at holding the points, D if you weren’t. In that environment, Shuri excelled (though far more on E than D). Unlike Extract plays, Secure is all about standing on a specific spot. Which means I can set up Shuri to consistently use both her actions to displace someone off of the point after they’ve gone to ensure they aren’t holding the point. Or, in a pinch, push them away from my teammates so they have to spend an action moving and be less likely to daze them. On top her power gets converted into rerolls for allies, which on a compact E board means your whole team can benefit ensuring no easy targets for your opponent to go after. But Extract plays typically want to retreat after grabbing the objectives, so pushing them away isn’t quite as valuable & they can/will move away from you. That’s not to say that Shuri isn’t still an all-star (she’s still an A), but I do put her below Okoye at least in the current game environment.

Joining Okoye in A-Force, Shuri is quite the welcome addition there to hold back points while Angela and She-Hulk tear things up in the middle. She’s also just generically loved in any affiliation playing control or an E focused attrition team like Cabal. And again, Wakanda Wave can be brought to any affiliation with merely her, Okoye, and Black Panther, so whenever you want to add a control option to your roster they are there waiting.

Storm – C – When Storm came out, I was super high on her prospects for Wakanda. “Stealth”, status application, even a character throw! She even increases the affiliated member count in a “Wakanda Wave” team squeezing more output out of Wakanda Forever. As it turns out, however, she has REALLY bad power issues. Her builders are pillow-fisted even by Wakanda standards, and her dice boost and character throw both cost 3 power. It often turns out that even though she’s affiliated you’d prefer Ghost-Spider, Valkyrie, etc in her place.

In X-men, though, Storm really shines. Her leadership (in a vacuum) is probably one of the top 3 in the game, and she excels as a backline objective holder who is surprisingly hard to mess with. Beast is slightly unconventional but can make a great addition to Wakanda Wave if your X-men/Wakanda roster is tight on slots for control characters, and X-Men love them some Shuri and Okoye. That said, her greatness as an X-men leader doesn’t really apply to her rating here outside of acknowledging the flexibility she brings. And unfortunately outside of Wakanda/X-men (perhaps A-Force?) I do not recommend taking her. Even here I only give her a C, and could see her dropping to a D easily.

Killmonger – C – Considering the response to my rating of Killmonger in the Cabal and Criminal Syndicate episodes of this series, I’m expecting a LOT of push-back on this one. Yes, he can be an absolute blender if the stars align. Yes, Usurp the Throne is cool as shit. But he has huge power issues and vulnerability to control. You can’t charge until turn 2 without R&D, and if you flub on round 2 (which is surprisingly often) he’s basically worthless for the rest of the game in my experience. Due to his power generation issues he also often struggles to play Usurp the Throne to great effect, especially if forced onto a split map. He does come with bridges into Cabal and Criminal Syndicate, but hes a superstar in neither of those affiliations either. If you really want to focus on him because he’s so freaking cool when he pops off, be my guest. But if you want to get the most out of your Wakanda roster, focus on the big three.

That’s going to be it for this week’s tier list! Let me know in the comments what pieces you think I overrated or which pieces I’m sleeping on. If you want to make your own Wakanda tier list you can make it here:

Across the Bifrost Ep 95 Mordo and Ancient One