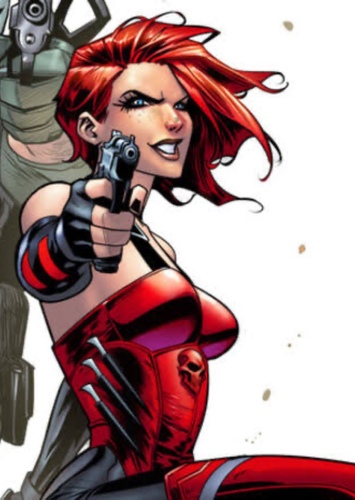 Man, AMG really doesn’t let up with their release schedule! Less than a week after spoiling these bad boys:

they’re back revealing the full card for Sin!

Sin, or Sinthea Schmidt, is the daughter of the Red Skull, Johan Schmidt and partner of Crossbones. And much like how a new generation brings a new ideology, Sin brings a whole new playstyle to Cabal.

Starting off with her statline, there are two deviations from the “standard” 3 threat array:

2) she has 4 mystic defence which is a nice upside

Personally I’d prefer if she stayed 5/5 on Stamina, especially as there isn’t a meaningful difference between her front and back sides, but eh. As we get more into this kit you’ll see she’s more of a skirmish character.

Onto her attacks there is a major elephant in the room. I’m going to go ahead and assume this is an issue with the promo image and her builder doesn’t cost 4 power. Because otherwise, she’s quite possibly the least playable character in the game? AMG has since taken down the tweet with her card which lends credence to this being a typo.

But, working under the assumption that her builder is actually free like EVERY OTHER CHARACTER IN THE GAME, I’m pretty whelmed by the now increasingly common Automatic Pistol attack. I’ve been tinkering with “Rapid Fire Tribal” in Cabal, and a cheaper leader with a rapid fire attack might be worth losing Red Skull’s leadership. Rapid Fire attacks scale great with rerolls and dice bonuses, of which Cabal can be great at stacking with sufficient motivation.

Make it Personal on the other hand is interesting to me. I’m not sure how often you’ll get this off due to the r2 of the attack, but if you do it’ll pack a surprising wallop. For a crit and a wild on the attack, you get to flurry essentially but the attack becomes Mystic! There are not too many characters except for the 5+ threat club who can handle taking two 6 dice attacks of physical and mystic to the face. Combined with other elements of her kit that we’ll cover soon, this might actually be a feasible part of her kit which is actually mildly exciting.

The big kahuna, what we were all waiting to see since the panel 2 play they did for her. You have a 50-50 shot of forcing nearby enemies to cede scenario elements either dropping or retreating. For balance’s sake it’s AFTER scoring but the ability still seems incredibly strong to me. In a lot of cases its “50-50 your opponent has to spend an action getting back the scenario element or fall behind” which is a total 180 from current Cabal beatstick lists. I expect a lot of interesting Cabal rosters that pick Sin for scenario and Red Skull for attrition in the near future.

BIG fan of Hit & Run here. With a flat power generating builder (at r3) you’re basically guaranteed to have power for hit & run if you start your activation within r3 of an enemy. Quad tap some poor fool and retreat onto a point seems like a probable occurrence. Hell you can even use it aggressively on her with opening up with a Hit and Run Automatic Pistol into moving into r2 for an Insult to Injury. I fully expect Sin to be the premier Hit and Run user for the foreseeable future.

Another exciting bit of flavor spoiled. As a bit of a play on Corvus/Proxima, Sin pairs with her partner in crime – Brock Rumlow AKA Crossbones. I am dubious as to whether they will have quite the same 1-2 punch as Corvus/Proxima, the combo does allow for a wide Cabal list to manipulate priority which might be worth its weight in gold. Also note that this isn’t faction specific so this might increase Sin’s stock in a Criminal Syndicate wide list that wants to go last but doesn’t mind an option to force going first if threatened. Do note that this requires going with Sinthea first which is mildly annoying as it might limit her ability to move away from her slower partner.

Interesting ability but I question its use. Sin spends power on exactly 2 things in her kit – her Hit and Runs and her spender. Will she be hungry for power enough that this could be a deterrent for your opponent? Doubtful. That said, it does work on allied effects, so catching her in beams/aoes or similar effects does power her up if you’re in a pinch. Time will tell whether this actually amounts to a tangible difference on the table, though.

Finally we come to Stealth. Not much to say here that hasn’t been said by every Stealth character that has come before, but with her Hit & Run playstyle I am guessing she will more consistently be out of r3 of those key targets you’re afraid of hunting her down. Nice addition and will help limit her statline’s tendency to go pop out of nowhere rounds 1/2.

Overall I’m pretty happy with Sin. To be quite honest, as soon as I heard her leadership I almost didn’t care about the rest of the card as long as she was 3 threat to enable some wider Cabal strategies. But in addition to a super cool leadership she has a solid (if somewhat un-spicy) kit. I fully expect to see Cabal rosters using her to manage control and attrition in the same affiliation, and potentially could see Criminal Syndicate getting slipped in for priority manipulation in their wide lists.