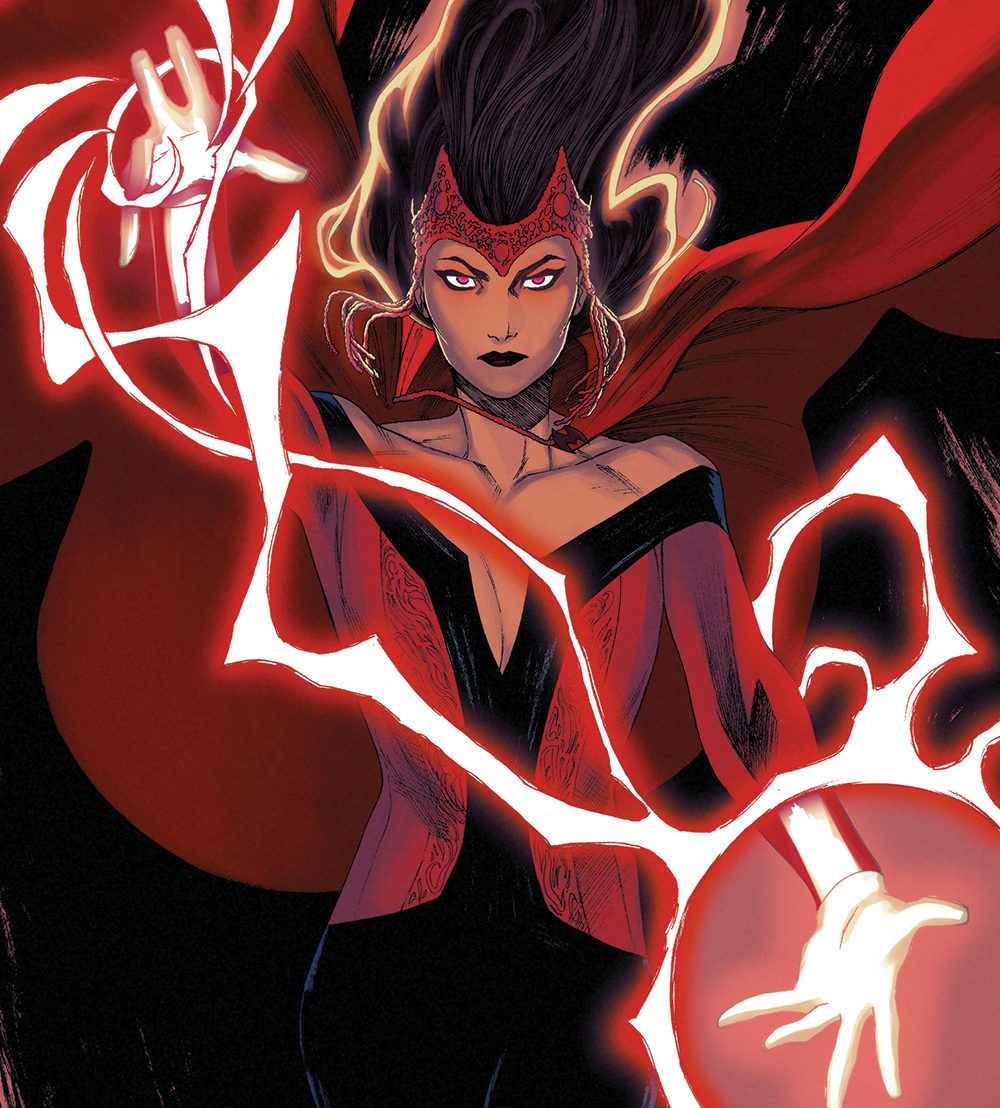 After them giving us Sinister last week I was totally not expecting them to announce the 1-2 punch of revealing both of the Maximoff twins on Monday/Tuesday of this week. But AMG definitely likes to spoil us:

Like Sinister, we already knew bits and pieces from the Panel to Play, but now that we get to see the full picture… wow. Without any further ado let’s dig into Wanda Maximoff.

Starting off strong as a 5 threat character with a literally identical basic statline as Doctor Strange, there’s not a ton to complain about here. Solid defensive spread for a more backline character with not quite as much stamina as a dedicated frontline 5 threat like Thor and Angela, but as we’ll get into more further down the line she has a fair number of tricks up her sleeve to stay safe.

OOF. Now THIS is a builder. Not only do her failures count on successes (more on that later) but she even has an excellent status application failure trigger on her builder. I’m not sure quite exactly how this stacks up next to Psyonic Blast on M.O.D.O.K. which is the closest analog – sap is really really good, but so are these statuses being handed out. This is also huge as another high quality long range mystic heavy has now come to challenge M.O.D.O.K., and unlike him she’s mobile enough to play pretty much any secure. I expect a LOT from this builder – if you didn’t catch the latest Danger Room episode (which I was on), Jacob breaks down just how good the math is on this, setting aside the condition trigger which wasn’t known at the time. The short of it is she slaps.

Speaking of slapping, holy moly. This is the ultimate “fuck you, you die” spender in MCP. No crits exploding, crits don’t count as successes, and strictly better pierce, all on a r3 mystic attack with 8 dice. Sign me up! Not much more to say about this because it is as straightforward as it is powerful – if you have someone who needs to go pop in r3 and you have the power, you can pretty reliably say goodbye to them with this beaut.

Wanda’s doing her daddy proud with this Telekinesis ability. Unfortunately it isn’t a long throw to match the pinnacle of 5 threat mystic turrets – Ebony Maw – but we can’t all be perfect. Between this and her full set of mystic attacks I expect her to be a HUGE asset to Brotherhood who loves throws and loves non-physical attacks even more.

I think a lot of us assumed that Judgment was going to stay a Ronan only thing, and boy were we wrong. If you haven’t played with Judgment before I don’t blame you as Ronan hasn’t been meta in a while, it means characters with the status don’t gain power from being attacked. Unlike Ronan though, she can only use it if they attack her, she can’t use it to punish enemies hitting allies. So after someone goes in on Scarlet Witch and fails, you can turn around and daze them while ensuring they flip with 0 power and are therefore no threat at all. I’m assuming Wanda’s power economy will be overflowing with how bonkers her builder is, so this will be a potent deterrent for would-be attackers.

The crown jewel of the kit IMO, turning skulls into successes is BIG. Sure on defense it isn’t quite as potent as blanks into successes, but its a powerful jack of all trades effect by allowing it to work on attacks and dodging too. Additionally, this ability is far more tolerant of rerolls than counting blanks as you can reroll as many times as you have effects because worst case scenario you get locked into a success. This will stretch her already efficient offensive and defensive stats even further.

And to wrap up the kit we have a Crystal-esque anti-shaking aura and flight. Personally I’m a little annoyed with Hex Field not working on all of the statuses her builder hands out as that seems like a neat little bow to put on the kit, but considering how common bleed/incinerate are that might have been a little OP so I understand where they’re coming from. Hex, Judgment, and Poison are all still obnoxious statuses that you would seriously consider shaking so taking the option out of their hands is always nice.

All in all I am very bullish on this Maximoff twin. To me she’s essentially a more fighty M.O.D.O.K. without a bow effect, and more balanced between her front half and her back half. In particular I’m going to circle back a bit and re-emphasize how good she is for Brotherhood. She’s an affiliated secondary heavy hitter when Brotherhood already loved playing Magneto M.O.D.O.K. double flank on B, she’s mystic exclusive in an affiliation that has literally ONE non-physical/collision damage source and that’s a spender on Toad. Magneto Scarlet Witch Mystique and a 3 threat of your choice is 17 threat and I assume will be quite the attractive team setup for Brotherhood going forwards – you never know which heavy will Asteroid M where to ruin your day. I am VERY excited to put her on the table and see how much damage she can do.

Finally a shout-out to our maximal partners where you can purchase the twins: