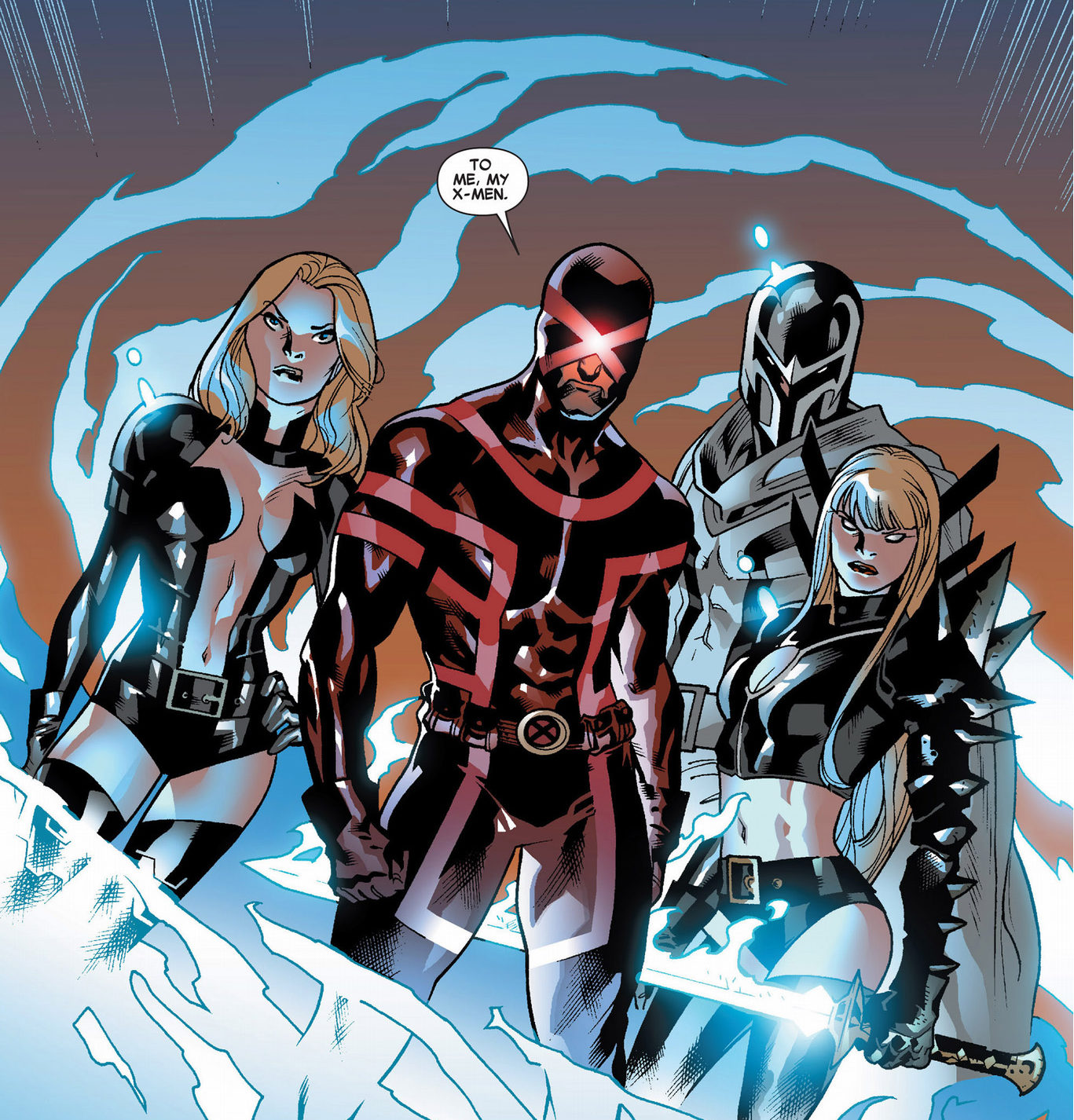 I have been playing X-men very regularly since the new characters hit the streets but I haven’t had a good chance to test their mettle in a tournament. I decided that Adepticon would be that test and I would try to play them for the vast majority of my games.

I played 4 games on Thursday with them and then played Brotherhood for the Team Up Event. Going into Saturday’s Contest of Champions event, I definitely wanted to play Mutants. But I needed to change up my plan. I had been running Voodoo and the single Extract Crisis Cards. But after a game that took 14 attempts to find the Kree Core, I just didn’t want to play that way. I decided that I would switch Lizard and Dr. Strange for Corvus and Proxima. This would give me a tactical advantage on my extracts.

Here is the roster I put together…

There are quite a few subtle but significant changes. Every time a character comes in or out it has a corresponding affect on my other card selections.

Infinity Formula becomes Deadly Meteors: I eventually settled on Meteors because my team had become a touch more brawly with Corvus and Proxima. I was enjoying X-23 who can immediately heal after the damage from the crisis. Corvus also counts his first skull as a crit so he won’t take damage unless I roll two skulls. I felt that this would overall put me in a better place even though this was my least favorite of my 3 secures.

Voodoo becomes Thanos: This was a hard change to make. I had just recorded an episode about how good Voodoo is and that he should probably should be in every competitive roster. However I realized in most situations I wouldn’t be able to play Voodoo because Corvus and Proxima were critical to my plans for Cubes and Spider Infected. This meant I would only ever play Voodoo on Hammers when I lose priority and this didn’t feel worth it. I started thinking about other possible characters for the slot and I decided that Thanos gave me the most potential to counter other Black Order teams and to give me roster an option other than X-men if I ended up in situation where I felt too disadvantaged with Mutants.

I believe I lost priority but my opponent had me chose my secures. The crisis combo was Spider Portals and Hammers. I used my traditional plan of moving Domino forward but keeping her within Range 2 of Corvus, then late in the first round I use the leadership on Corvus and then double move to the secure right in front of my opponents deployment. This often leads to me scoring 3/4 Portals on Multiple turns.

My team was Storm, x-23, Domino, Black Panther and Corvus with Reality. I won with a final score of 19-13. Gene was an awesome opponent and really kept me on my toes. I was worried the whole game if I made a mistake he was going to be right there to dunk on me with Hulk.

I won priority and chose my secures. The crisis combo was Spider Portals and Cubes. I used the leader to bump Corvus forward, grab the center cube, back up and interact. This lead to a small point advantage and I made hulk chase me down. I also ended up scoring 3/4 Spiders on Multiple turns.

I played Storm, Rogue, X23, Proxima and Corvus with Reality. The final score was 17-10. I am fairly confident that this was the game that Corvus never made an attack. I ended this game feeling rejuvenated and I think that was because Mike was just such a cool opponent and I had a blast playing with him.

I lost priority and we ended up with Extremis Console and Hammers. I seriously debated playing X-men anyway but this was the sort of situation that I brought Black Order for. I figured I could keep the initial score at 4-4 but I was too concerned that at some point Criminals would get an advantage on me. So I dropped Black Order this game. My opponent was playing very cautious so I ended up get 3 hammers. Then I dazed Kingpin Rd 2 and then KOd him Rd 3 and that basically locked in the win.

My team was Thanos, Corvus, Proxima and Toad. The game ended 16-7 at the begining of Rd 4 when I KOd Black Cat. Noah and I were probably talking as much as playing and I really hope I get to see him at future conventions.

This was definitely the match up that was worrying me the most. I had a feeling Guardians might just be able to make too many attacks. I won priority and we played Deadly Meteors and Research Station. We both gasped at that combination.

I took an immediate lead and went up 5-0. I think my opponent was being a touch cautious about how many characters he was willing to feed me. The second round was bloody and my final activation was Corvus. I had already dazed both Nebula and Groot. He had used misfits but it was just okay. Star-lord hadn’t activated yet and felt dazing him was worth losing priority. Thankfully that plan worked out. His opening play with Rocket and Deadly Duo rolled pretty mediocre. At this point my opponent started losing characters. I think I KO’d Starlord and Nebula next activation. His dice started to get better and I had a dice whiff with x23 later on but it was too late.

I brought Storm, x23, Domino, Corvus and Proxima in this game. The final score ended up being 17-3 but I really don’t think the score indicated just how challenging this game was. Nate was an amazing opponent and if we played this 10 times I have no idea how many I can actually be on top off. But I play MCP to play games with incredible players like Nate.

This game was also Streamed which you can see here: https://youtu.be/B-dqCr7I51w

X-men are in the Semi-Finals

To everyone’s surprise X-men made top 4. I played Black Order once but my core strategy was centered around X-men and I was very happy to see it work at an event. But I wasn’t playing them because I wanted to be an underdog. I legitimately felt I had a really strong plan and it just happened to be X-men. I will admit that being able to play something that wasn’t as common helps because my opponents weren’t prepared for it.

In this game I was playing against Nate from Gamer’s Guild. He won priority and chose Extracts to avoid my game plan with Corvus and Proxima. We ended up with Spider Portals and Montessi Formula. I brought Storm, x23, Domino, Corvus and Black Panther.

He use Luke Cage to grab the middle Formula. I used the Storm’s Leadership to get Corvus onto his back portal which allowed me to go up 4-3 even though he had the two Extract advantage. But in the second round I went for a play to daze Black Cat and I ended up dealing the exact amount of damage to set her up for walk, walk, hop, and steal. If I had dealt one more, I have the power to throw her and if I deal one less she is short a power. This lead to me losing my advantage in conjunction with Voodoo getting a big Sap on Corvus to set up a Possession. The score went 7-7. Unfortunately for me, every play I made from there went poorly. I went for a couple riskier portal plays that back fired and Corvus didn’t get to interact in round 3 because my 5 success attack with Pierce vs Voodoo was met with 6 blocks so I didn’t get power to interact. I believe the final score was 16-12 for Nate and he moved on to the finals.

Overall I was disappointed to let down X-men but I was happy it was my mistakes leading to the loss and not feeling like X-men let me down. Nate played a near perfect game and I made some questionable plays in a game where I felt like I started in control.

This game was also streamed which you can watch here: https://youtu.be/1oKaJBmukOM

The final game for me was determining who walks away with 3rd place. I won Priority and we ended up with Mutant Madman and Hammers. I brought me favorite team of Storm, Beast Domino, x23, Toad and Black Panther.

The key to this game was that I kept my characters with Hammers on the side with just Lizard. Beast, x23 and Storm were able to facilitate a second round daze on both Hood and Juggernaut. But the real MVP was Toad as he just kept running around flipping a secure each round that was costing my opponent precious actions. The final score ended up being 20-11. Nick was great opponent and we had a really interesting game. I was able to mitigate his Sinister Traps with the leadership and x23 and I would have been in a much worse spot if he had Well Laid Plans instead.

Overall I was able to bring home a podium finish for X-men and I took 3rd. I played X-men in 5 out of 6 games and I used every character in my roster at least once. I am definitely excited to represent for the the Mutants more in the future. Just remember that the most OP thing you can do, is make it to Adepticon.

The next article is up about my experience playing X-men is a 3 Box Challenge: https://acrossthebifrost.com/2022/04/11/to-me-my-x-men-part-5/